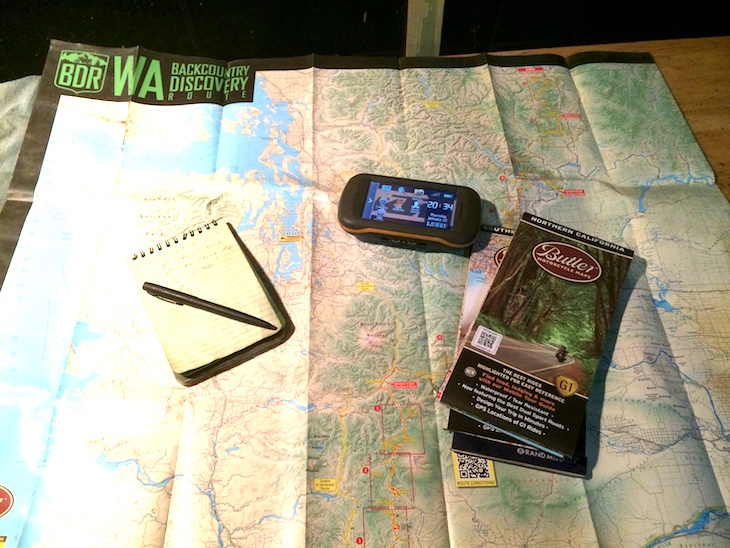 I was a map and hand written notes type of guy for years, and I made all of the snarly comments about how I’d have bigger problems if my maps and compass stopped working.  I had played with GPS units, but still relied on the old and familiar analog way.  A couple of years back I finally took the plunge and got set-up with a Garmin Montana.  The maps and notepad are still with me, but the addition of a GPS has greatly expanded what I could do.  Trips like any of the Backcountry Discovery Routes would require a massive road book to even attempt, and countless hours of transcribing every turn, road name, and the mileage between turns.  I do enjoy a good timekeeping type enduro, and have the utmost respect for rally racers that have to use roll chart or road books to navigate, but it’s not the type of navigation I want to do to find a friends house for Thanksgiving dinner or a cook-out.

The needs of the adventure motorcyclist

There are scores of GPS units on the market, but the unique demands of the adventure motorcyclist quickly whittle down the field to just a handful.  We require a unit that is rugidized, weatherproof, glove friendly, readable in sunlight, and can handle tracks.  Tracks are a collection of connected points (latitude and longitude references) that show a path totally independent of the map or roads.  This is the format used on all of the Backcountry Discovery Routes, GPS guided rides, or when your buddy gives your a .gpx file to his super sweet secret stash single track trails.  I know a few of you are looking at your iPhone thinking ‘Well this can do the job just fine,’ I could have also used my iPhone to type this, but it wasn’t the right tool for the job, so my aging laptop did the duty.  Keep in mind a sextant and compass can be used to cross the Atlantic, but it is no longer the most common or effective method to do so. 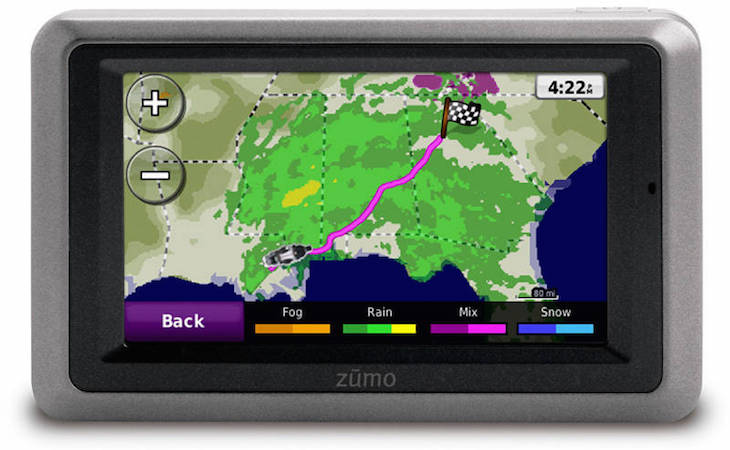 The Zumo series by Garmin has been around for a few generations now.  In many ways it is a rugged version of their automotive units, but with a few additional features that motorcyclist want.  They boast features like lifetime map updates, Bluetooth connectivity (both from your phone and to a helmet communications system), and all of the power cradles to use both on the motorcycle as well as in the car.  They are easy to use, plug and play units with limited customizing options and battery life.  Currently there are only three models in the Zumo line that can handle tracks.

The venerable Zumo 660LM, as well as the XM radio ready Zumo 665LM variant, have been on the market for a few years. Both are still great units.  There has been a Zumo 660LM on every Backcountry Discovery Route proving run. That should speak a little about the ability, and Touratech’s faith in the unit.  Like all Zumo units, it is easy to use due to a largely simple and intuitive layout.  Even though the Zumo 660LM is starting to get a little long in the tooth it still makes an awesome option.  Especially for someone who doesn’t need the latest and greatest or is on a budget.

The Zumo 590LM has replaced the Zumo 660LM as the flagship motorcycle GPS unit from Garmin.  It runs the newest operating system, which is faster and provides better routing.  It also has a larger 5” screen that is much easier to read than the Zumo 660LM in direct sunlight.  One of the features that I have been most impressed with is the level of connectivity with a smartphone.  Pandora music streaming, real time traffic, and weather information overlayed on the map are features available with an app installed on your phone.  The Zumo 590LM also has limited Ant+ capabilities, allowing it to use the Garmin tire pressure sensors, and control Garmin’s action camera, the Virb.  With Garmin’s history of long production runs of Zumo units, this would be the Zumo unit I would recommend to those with the budget and the need for a Zumo. 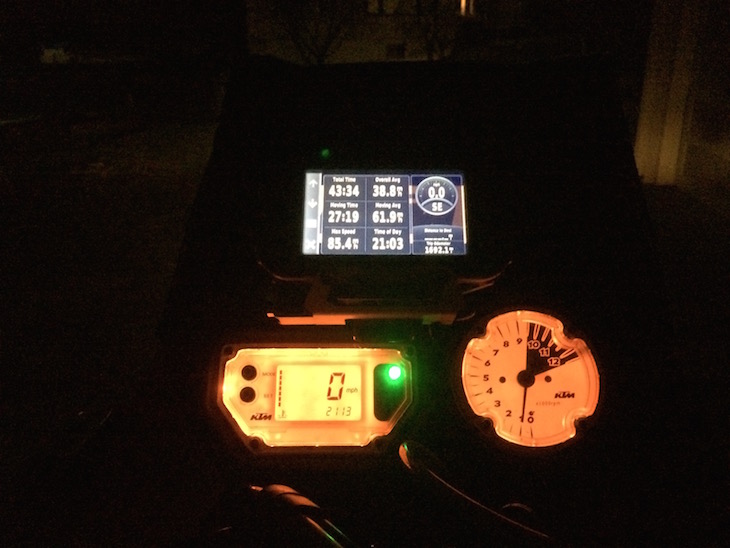 While Garmin offers a whole slew of handheld GPS units, the GPS Map 60 series (60, 62, 64 in all of their forms) and Montana are the units that are most used by motorcyclist.  Really the Montana is the main unit and the GPS Map 60 series is still hanging about in peoples gear piles that finds its way onto dirtbikes.  Both of these models are rather ala ca carte deals, maps, power cradles, and the like are normally sold separate.  For someone who does not care about Bluetooth connectivity, and wants an extremely powerful, versatile, and customizable unit these are the answer.  There was a time when the GPS Map 60 series was the go to unit for that sort of thing, but the large glove friendly touch screen on the Montana has really eclipsed the small screen and buttons of the GPS Map 60 series.

The Montana has an advertized 16hr battery life with the supplied lithium ion battery, and a provision to run AA batteries.  Once City Navigator software is loaded it can provide all of the turn by turn type navigation that a Zumo series unit can, but still be taken on a hike.  Beyond great battery life, the Montana also has different, customizable profiles, pretty much you can save how you want information displayed for different uses.  This is like hitting a button and having a GPS unit formatted for a different task, the map shown, the way the map is shown, the trip computer information, and all of the other data fields as you left them for that use.  For a GPS that will be used for many things, in the car, on the motorcycle, off-road, hiking, boating, and the like it is amazing to have it all wrapped up in one package.  This degree of customizing can make things a little trickier since one click can change something unintentionally.  It also lets you see the distance to next turn count downs, eta to destination, and countless other bits of information shown.  If you like to play with lots of information or have been working with GPS units for years and are comfortable with units like the old benchmark standard 276c, the Montana will be comfortable and pretty easy to use. 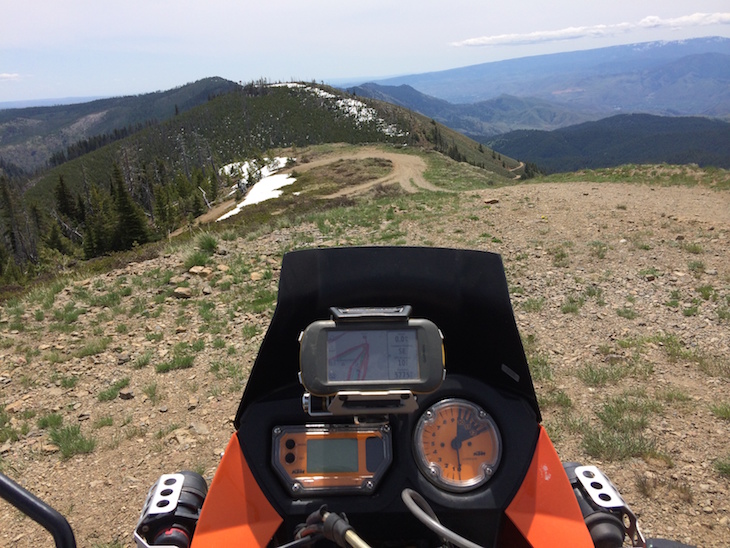 At the end of the day a GPS unit is just another tool in the box.  The game of chaseing tracks on a screen is lots of fun, the option of running a BDR that someone else did the leg work on, or chasing that ride you took a while back, makes spending a week hiding in the woods some much easier.  There is no replacing a paper map for seeing the big picture, I cannot even try to count the times I have used my Montana to find where I am on a paper map, then looked where the next town was.  You can keep your paper maps and use a GPS, I encourage having both.  If you want a motorcycle only, easy to use GPS get a Zumo 660LM or 590LM, if you want a GPS for many things or like to geek out with all of the data you can collect buy a Montana.  I resisted this technology for years, only to wish I anted up years sooner and embraced it.  Godspeed on your travels and have fun out there.