This is the twelfth post in a series that will follow Matt and Brayde Willson’s motorcycle journey from Seattle to Tierra del Fuego over 120 days.

Our next blog post may very well be titled “Why We Never Left Colombia.” So far, we like just about everything about this country, and we’re not even half way through it.

After a nice overnight ride on the ferry, we landed in Cartagena. We took advantage of the restaurants and bars on board, and had a great time with the other motorcyclists making the same trip. This time when docking, the crew was able to lower the car ramps, so unloading the motorcycles was as easy as riding them off the boat. 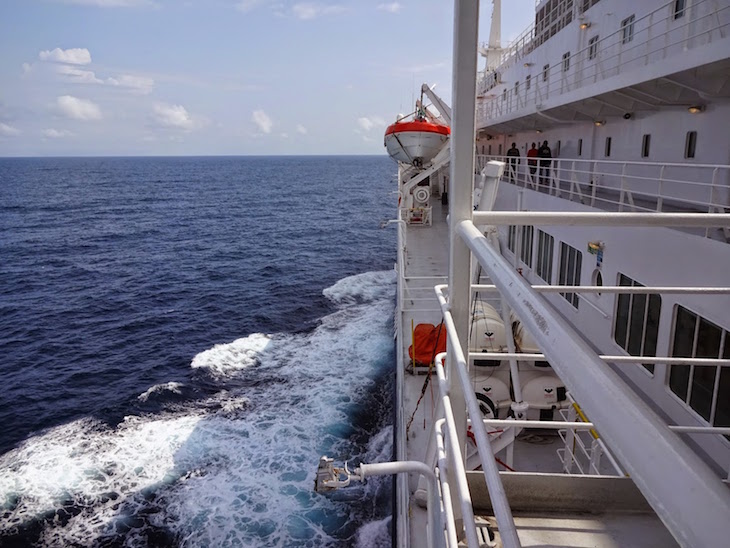 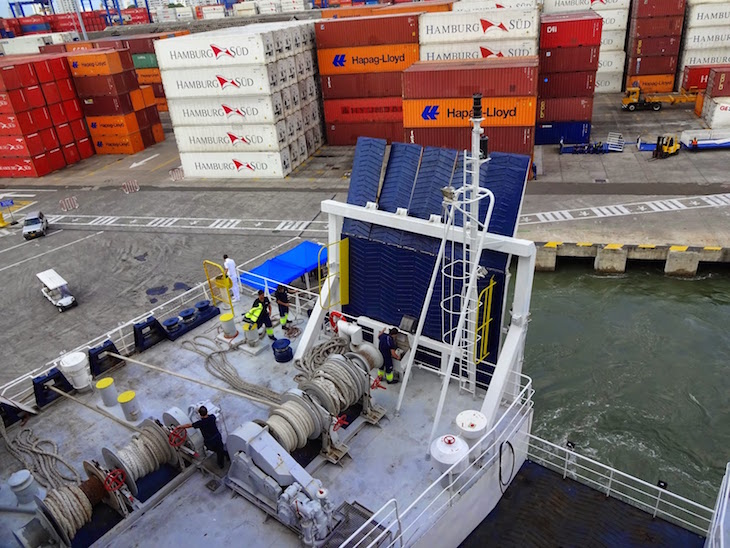 Once we were off the boat, it was time to complete the Colombian side of the customs and immigration process. We could instantly tell we were going to like this country when we stepped into the immigration office. All the staff were friendly, quick, and competent. There were no excessive fees or red tape. Even though there was a long line of ferry passengers, the whole process only took about two hours. The port was clean and well run. There were even blue and yellow Macaws flying around. Bienvenidos a Colombia! 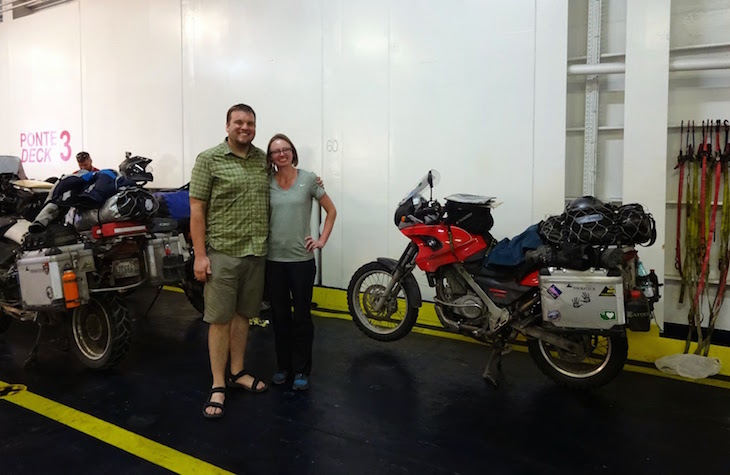 We decided to stay in the historic part of Cartagena. The rich history of the city is very apparent in these neighborhoods, surrounded by tall sea walls to protect from pirate attacks. It is a great city for walking around in with beautiful buildings everywhere, street food, museums, and things to see and do. 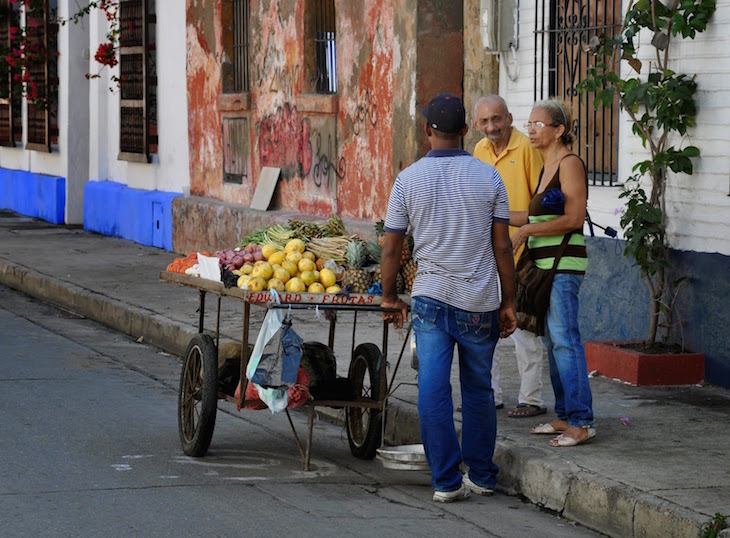 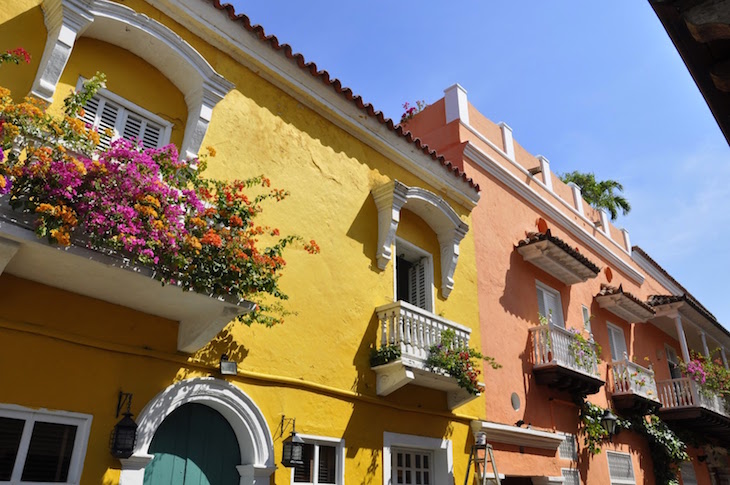 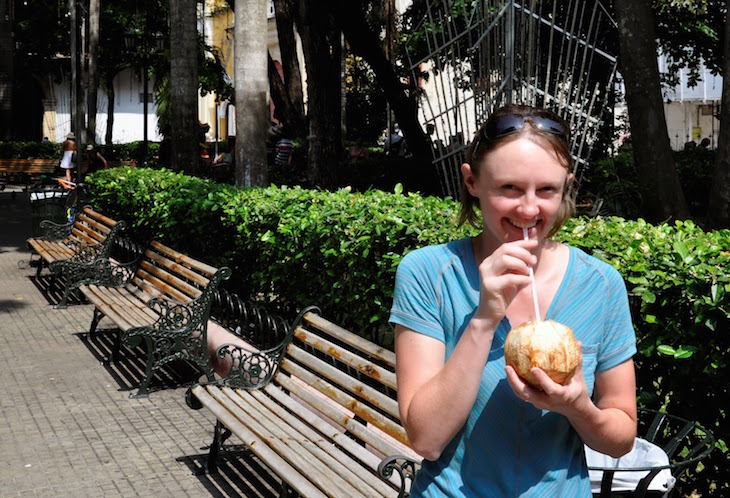 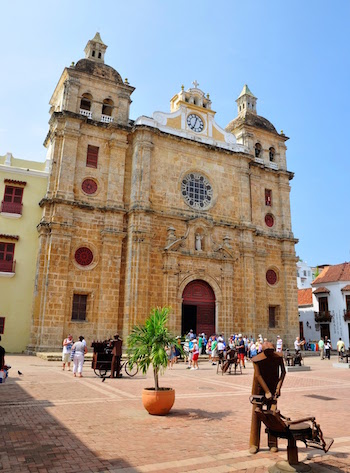 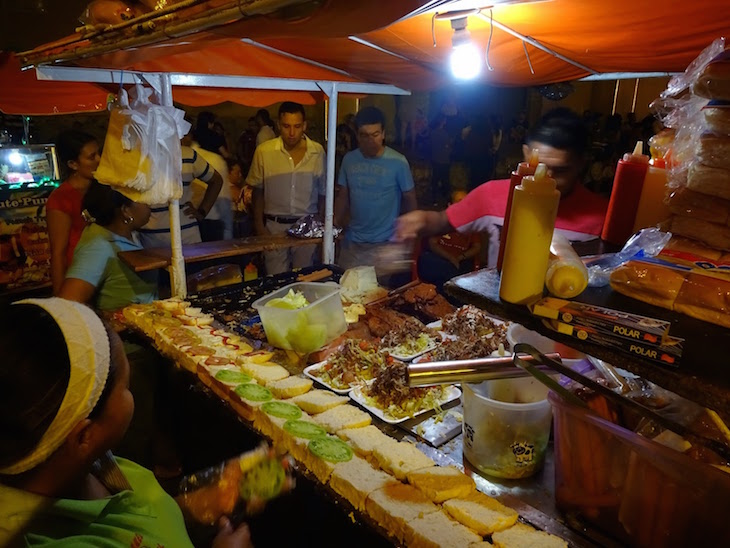 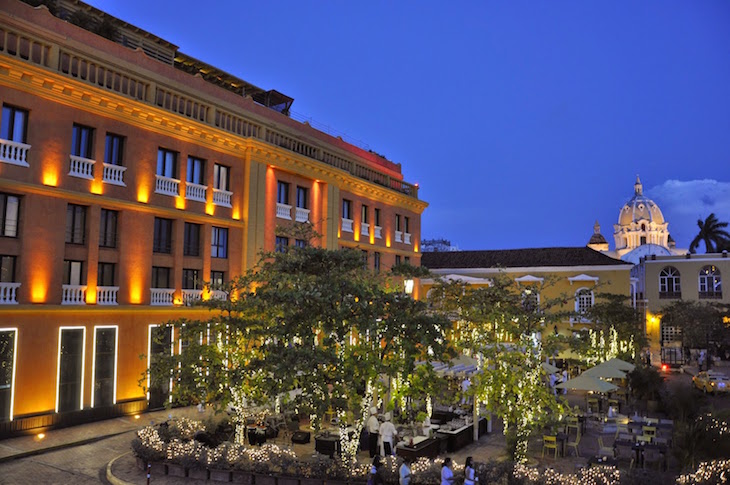 Spending a couple days in the city, we noticed a few things:

The streets are clean, and the food is good. Doesn’t get much better than this. 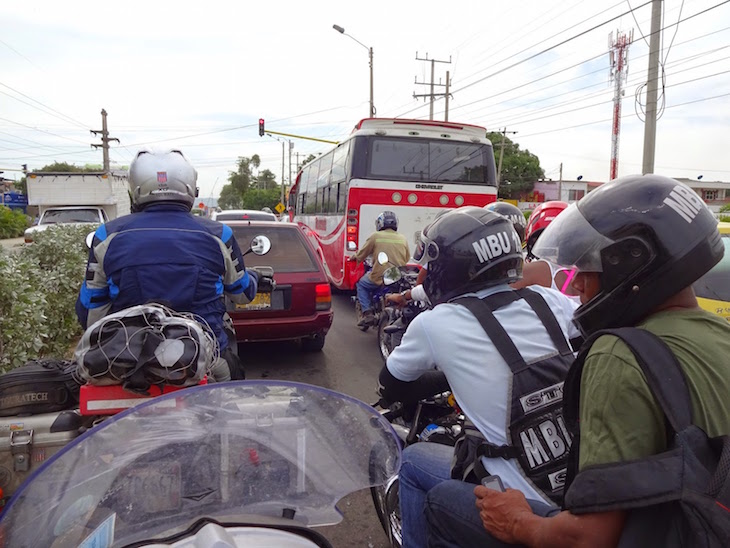 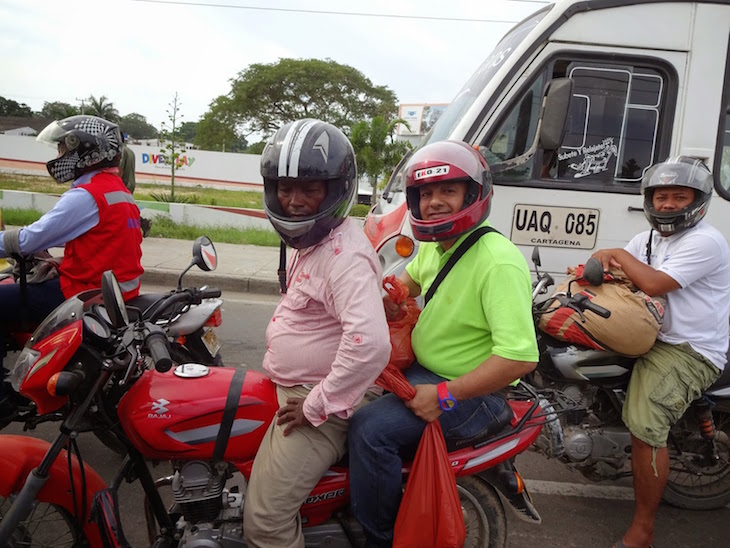 Leaving Cartagena towards Medellin, the traffic is heavy and hectic but has a certain flow to it. We make decent time and are quickly out of the city and into the mountains. There are military stationed along the highways every twenty kilometers or so. When you pass them, they all give you a big thumbs-up signifying that the road ahead is safe and clear. So far, we feel very safe on the road. About once a day, we get stopped by the police on the highways. After waving us to the side of the road, the officers will immediately shake our hands and introduce themselves. After checking our passport and vehicle documents, they ask us how we like Colombia, if we feel safe, how everything has been, and if we need any help. They couldn’t be any nicer and more polite.

We stop for the night halfway between Cartagena and Medellin in the small town of Caucasia. Again, everyone is unbelievably nice to us. It is starting to get a little weird. Where is Colombia hiding all its rude and mean citizens? The whole country can’t be like this… can it? 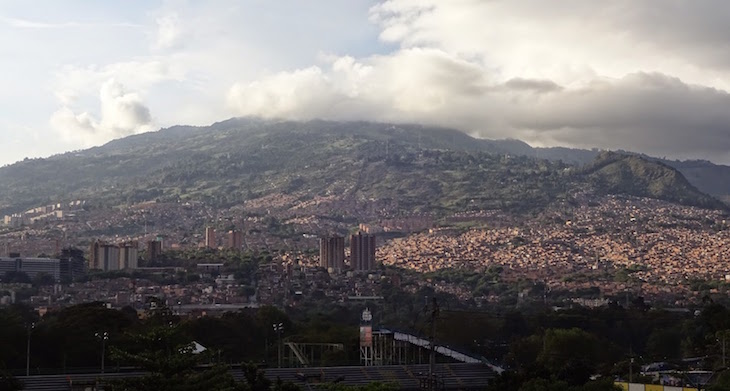 The scenery riding into Medellin is breathtaking. We were stuck behind lots of heavy trucks moving very slowly, so the view was welcome. Huge green mountains and valleys are reminiscent of Switzerland, and the descent into the huge city is drastic enough that people hang-glide from the top. Along the way, we saw people running makeshift car washes made possible by sticking hoses in the river further uphill. The pressure was so good that the water shot probably 10+ feet in the air.

Being one of the biggest cities we’ve ridden in so far in the trip, Medellin is a little overwhelming. There is a nice neighborhood called El Poblado, which is a little calmer but still close to the center, so we decide to find lodging there. While making a u-turn trying to find a hostel, a Scottish fellow named Albert flags us down. He is a fellow motorcyclist and has a small hostel above his British pub. He lets us stay in his own room above the bar for a couple days, and we get to park our bikes in the bar every night after closing. Crazy coincidence that we happened to be making a u-turn at the right time in front of his bar. Over a couple days, he helps us with our route, finds us some parts we needed, and was delightful to hang out with. 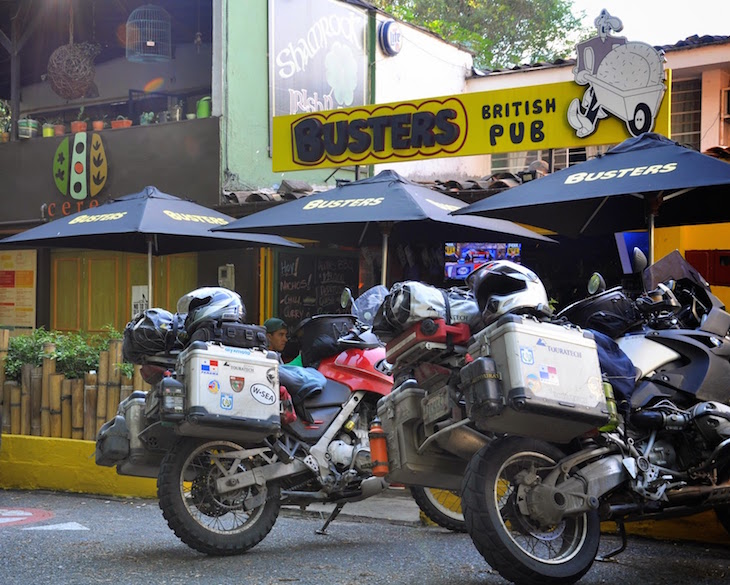 Medellin has a bit of a sordid past, being the headquarters of one of the largest Colombian cartels, run by Pablo Escobar. Thankfully, that was about 20 years ago. There’s still evidence of its mark on the city, such as in the Parque San Antonio: Fernando Botero’s sculpture Bird of Peace was severely damaged in one of the many city bombings that killed and wounded several people. Botero requested that the city leave the disfigured sculpture exactly as it was and install another, pristine version beside it. The juxtaposition made a powerful statement that we could still feel today. 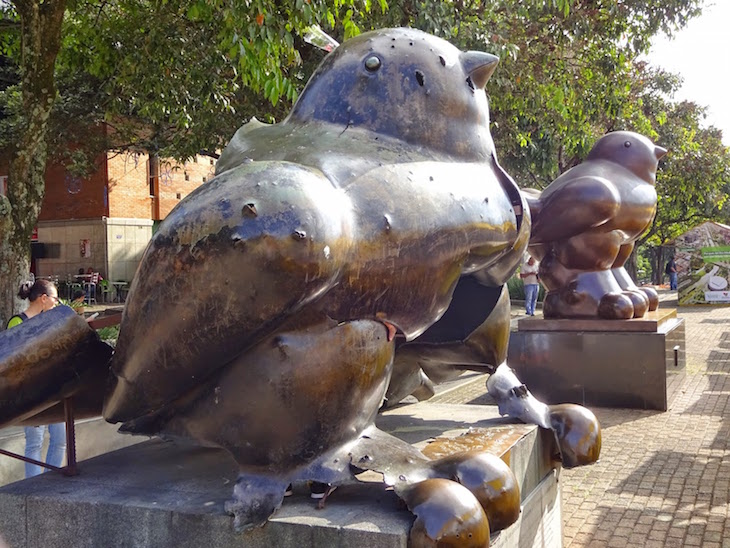 We rode the city’s metro line around to see Plaza Botero (full of 23 other sculptures by the same artist), Parque de Bolivar, and the botanical gardens. Being that the Christmas holiday just began, the city was packed. We actually got separated once when Brayde squeezed onto a train that I didn’t have a chance to get on before it left, but we met back up at the next station without stress. It was impressive to see so many people out and about. 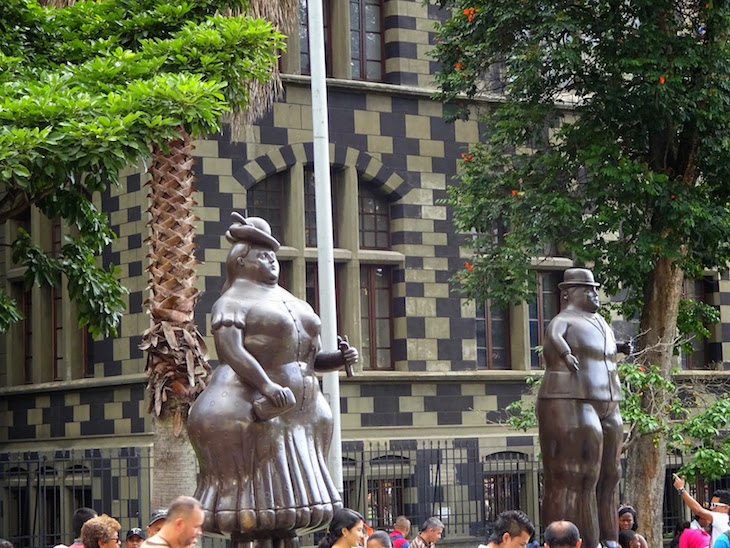 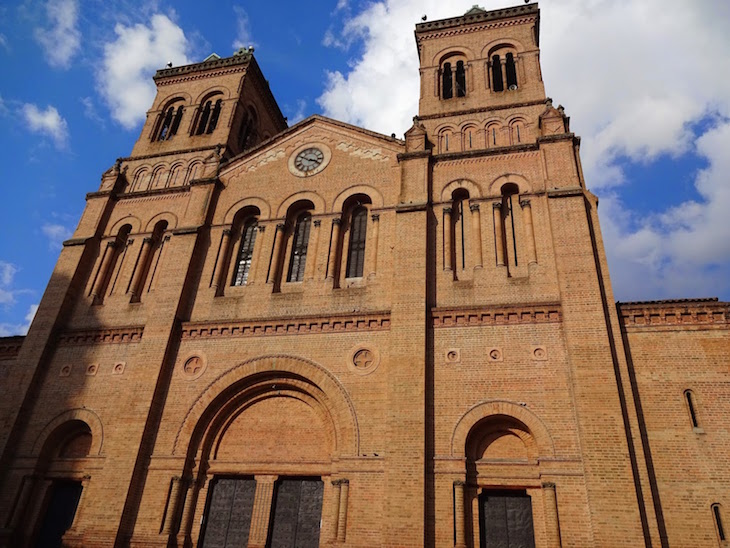 With new tires lined up in Bogota, next we head east and plan to stop at the infamous Hacienda Napoles on the way.