Well our last update was in January and such a lot has gone on in the past four months! We crossed from Penang, Malaysia into Indonesia on, we later found out, one of the last "onion boats" (quite literally an old fishing boat) that crosses the sea of the Malacca straights and one of the only ways to get across from Malaysia to Indonesia with a bike! We were lucky.

We entered the city of Medan at a bit of an interesting time (British understatement!) as on the day we collected the bikes from the Belawan docks, riots were taking place. There were police in full riot gear everywhere, traffic was being stopped, roads were blocked – the roads we needed to use were shut – so after a few wrong turns, being turned round, going up one-way streets the wrong way (unintentionally! – no really!) getting shouted at by policemen to stop (which we didn’t) and riding past blazing tyres set alight by the demonstrators, we eventually found our way out and into Indonesia proper.

Our route was to take us through all of the islands; Sumatra, Java, Bali, Lombok, Sumbawa, Flores, West Timor and finally into the country of Timor-Leste. We had managed to get a 60 day visa with no problems whilst we were in Bangkok Thailand, however we needed to travel quite quickly through the islands. Not only did we have our own personal time constraint, we had been in Asia (Central Asia and the Far East) for 3 years, having first crossed over from Seattle to Japan in June 2009!… we were ready, in fact desperate, for a change. Australia was beckoning!

Indonesia… WOW! What an amazing place. Each island is like a totally different country. Parts can be hellish for riding; the cities stuffed full of the usual crazy drivers and heavy pollution, which you end up chewing on and swallowing- yuk! The trucks make you mad and so do the pot-holes that are big enough to swallow you whole! But at the end of the day we had some of our best riding in years. Everyday we would be up as dawn broke due to this being the quietest time on the roads and the coolest. Daytime temperatures would soar and so would the humidity. By 9am we would be soaked by our own sweat. The salty sweat would pour into our eyes as our helmet inners became wetter and wetter.

However, the riding outside of the cities made up for all the other madness. There were days when for a full 10 hours we would have 180 degree hairpin after hairpin (switch-backs) all the way up a beautiful emerald green mountain in the jungle and all the way down! We would end up so worn out with not only physical tiredness but mental as well! The condition of some of the roads and ability of most of the other road users took its toll and a few near misses were had (thank you guardian angel!) but this still didn’t prevent us from wondering why oh why isn’t Indonesia known as a riders paradise!

We took a few days out here and there to enjoy only some of the many pleasures that Indonesia has to offer; one the highlights being riding the flanks of the Bromo volcano. We arrived in the city of Ende, Flores, ready to catch the – once per week – ferry over to the island of Timor. We had to time it perfectly as if we missed this ferry we wouldn’t have enough time to reach the cargo ship which was due to leave for Australia from Timor-Leste on May 11th (in the end it left late).

Upon arriving in Ende we were told ‘nope, no ferry’ argh! ‘No ferry for maybe 2 weeks, or 3… but probably longer!’ We had a day to reach the end of the island of Flores and the ferry from Larantuka. No problems normally but my sprocket had only half of its teeth left and those teeth that were left were as sharp as needles! (there had been no chance to re-new on our way through the islands as bikes the size of ours are so very very unusual- the standard size being 150cc). I knew I would reach Ende OK but now we had an additional 300km to ride and all of it up and down mountains, which meant lotsof gear changes!

In the end this ride from Ende to Larantuka on the island of Flores was one of the best we had had in Indonesia… no, in fact, probably since arriving in the Far East! Amazing. Hardly any traffic, we rode through a glorious sunrise through ancient mountains in the midst of the jungle, which dripped with every kind of green foliage you can imagine. The locals in the small villages we passed through would greet us with smiles and waves and at times looks of slight amazement (we don’t think that many large bikes travel this way!) but as always through Indonesia… welcome and friendliness.

The ferry over from Flores to Timor took a gruelling 14 hours and was one of the most uncomfortable ferries we had ever been on… yep! even the boat down the Amazon had been a better journey and that had been days not hours! It was a relief to have arrived at last on the island of Timor as we now knew we would reach the cargo ship in good time.

Crossing from West to East Timor was an amazingly easy process. We had obtained our authorisation for our visa online (you must obtain this prior to getting your visa stamp at the border otherwise they will not grant you entry and you will have to return to the city of Kupang in west Timor, Indonesia and the embassy there) paid our $30 and that was it. Fast, easy and simple. We took the coastal road into Dili; in places this mountain road was rocky, narrow and very steep and somehow we timed it so well as to be in the wider sections when the huge trucks fought their way round this pot-holed and slick muddy road: it had been raining heavily for a few days prior to us arriving. We had hoped that our bikes would remain relatively clean as we had given them a quick tidy up in Kupang… but nope! Massive puddles of slimy red mud barred our way many times on this road and so both us and the bikes had a few mud swills as we hammered our way through Dili reminded us of Africa: a feeling of slight underlying tension and unruliness. Well, it was that and all of the UN vehicles… we hadn’t seen so many of these since our time in Africa!

The prices of things in Dili are crazy! One litre of coke is $6! And if you are stupid enough to want a small chocolate bar you would also pay $6! Local food of nasi goreng (fried rice) was still available but after having had nasi goreng for breakfast, lunch and dinner for days at a time when riding through Indonesia we decided that we could do without rice for another 3 years maybe… !! Luckily the backpackers place we were staying had a kitchen ‘of sorts’ we could use. We had to however, share it with the chucky brown cockroaches who roamed in gangs over every surface. These teeth-gnashing monsters also took prime position beside me and on me (!) in bed a few times… which led to a few sleepless nights!

Now we had to clean the bikes to within an inch of our lives!! Prior to being allowed to enter Australia the bikes have to go through not only customs but the dreaded quarantine check. We had heard the usual horror stories and had decided not to take a chance with the cleanliness of our gear. The advice was clean, clean clean… like new… no hint of mud (oh er!) not a fleck of grass or spit of mud, no bugs anywhere (or remnants of) even down to no hint of mud on the tent or tent pegs.

The cleaning process of both bikes was to take us 7 days in all – 12 hours a day. Yep! No exaggeration. We cleaned every wire, undid every zip-tie, every relay with a toothbrush… yes… a toothbrush dipped in kerosene and strong washing power diluted only a little with water. It does amazing things to the cleanliness of your bike but terribly detrimental things to your nails, which end up quite literally disintegrating! Simon! I deserve a manicure!!!

We ended up arriving in Australia, our 76th country, on our 9th anniversary of us leaving our home! We left the UK on May 18th 2003 and we entered Australia on May 18th 2012. It seems quite fitting to be starting our 10th year on the road in Australia.

Australian customs and quarantine was straight forward, but the whole shipping and fee process was very costly. We are currently in Brisbane after a long ride down from Darwin in order to reach the Horizons travellers meet where we did a 90 min talk. I (Lisa) also celebrated my 50th birthday at this meet! It all made for a very enjoyable weekend and we hope our first talk of many here in Australia. BTW, if any of you out there know of groups/dealers/corporations that may be interested in us giving a talk… send us an email.

On a side note… those of you who are wondering just when we are going to update our diary section of the website… (www.2ridetheworld.com) well, we are waiting for the release of our brand new website which is now being developed and, we must say we are very excited as its looking great… but not ready for release just yet! Once its ‘live’ we will start uploading the new journal but in the meantime we are relying upon our Facebook fan page to keep you as "’up-to-date’ as possible! 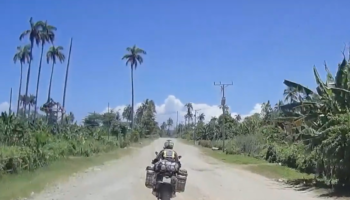