Two weeks back I left my update of the 2015 Touratech West Coast Rally preparation with more difficult scouting trips looming.  It was very productive, and this past weekend started the pre-running.  The routes were 95% complete heading into the weekend.  A large group of riders (the leaders and sweep riders for the group rides) camped in the mountains to pre-run and proof these routes.  We needed to confirm that the routes work and they concur with the difficulty ratings applied. 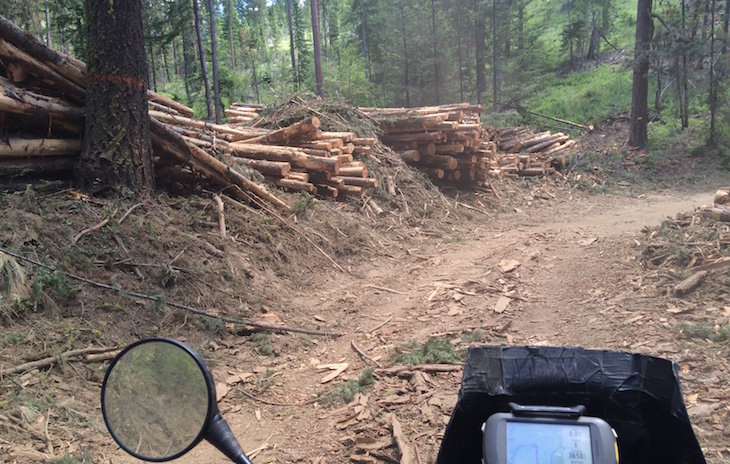 It also provided time for the lead and sweep riders to familiarize themselves with the routes they would ride.  They must make notes on bailout points, the tougher sections, and the harder to navigate sections (hairpin turns off the main road and the like).  I rode route #11, partly because I am an experienced, skilled rider, and partly as a reward for the hours and days I put in to prepare all of the routes for the rally.

This year we are going to again crank it up to 11, and break off the knob.  Route #11, for the second year, will be the sole double-black-diamond offering.  The knobbie tires are required and motocross boots are strongly recommended. Your bike will get scratched, you best bring a full tank of gas, and your intestinal fortitude to ride it.  It is 100 miles of mixed terrain: silty sections, fast twisty-pavement, overgrown double-track,  rocky single-track with exposure, proper little-bike-whooped-out-single-track (but still big bike friendly), and more.  Iain Glynn on his BMW R1200GS and myself on my KTM 950 Adventure have ridden all of this challenging terrain.  It is all passable on a large adventure bike, but you will be faced with a challenge.

Another quick transit on forest roads will bring you to new terrain for the Touratech Rally.

At approximately 70 miles into the ride things really get challenging:  Tough, winding, silty, whooped single-track for miles. When that ends, you legs will likely be burning and your heart rate will be accelerated.  Hopefully a tired smile will be on your face with the pride of conquering some tough trail.

There is more! It’s still not time to rush back to cold beers in camp.  A quick transit on pavement will bring you to another section of single-track, this time wooded and faster, starting with an awesome hill climb.  Some fast, little used forest service road follows, leading back to the pavement and the ride back to camp in Plain.

I have ridden almost all of the terrain found in the route during past years and during the preparation for this year’s rally.  I found this route to be very fun, and enjoyed the mild start, with the tempo rising and falling at a few points throughout, finally building to a very challenging crescendo towards the end.

I’m excited to lead riders over what will be the most challenging route yet offered at a Touratech Rally.  We are less than two weeks away from the Touratech West Coast Rally now.  I look forward to seeing all of you there.  Until then, have fun, good luck, and godspeed.