Lisa’s hacking cold wasn’t going to stop her enjoying what we are here to see.  The Perito Moreno Glacier and so by 10:00am we’d climbed back into our layers of riding gear, somehow managed to do up the strained buckles on our boots and were waddling downstairs and out to the bikes.

The 11 took us straight through the centre of El Calafate and before long we were enjoying the vast open views over ‘Largo Argentina’ (the 3rd largest lake in South America) and over to the snow topped peaks on the horizon.  This was great, even with my dodgy seal the bikes were feeling good and we were both enjoying being ‘luggage-less’, with all our bags and kit tucked up nicely back at the hostel. 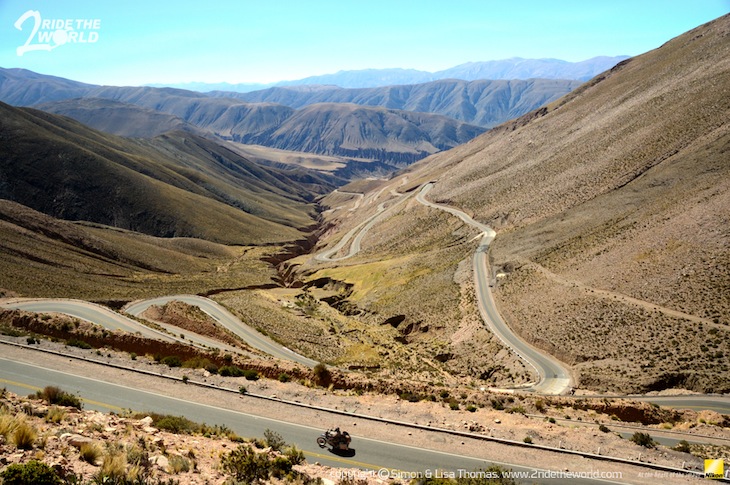 Fast tight clean curves were wetting our appetite before we arrived at the park entrance where we swopped 30 Pesos each for our light blue printed day visitor passes. We still had another 30km to ride from the park entrance to the glacier itself, but wow, what a ride.  We hugged the mountainside as the lake slid in and out of view, and wove in and through the light forest covering that was by now shimmering gold and ochre reds. 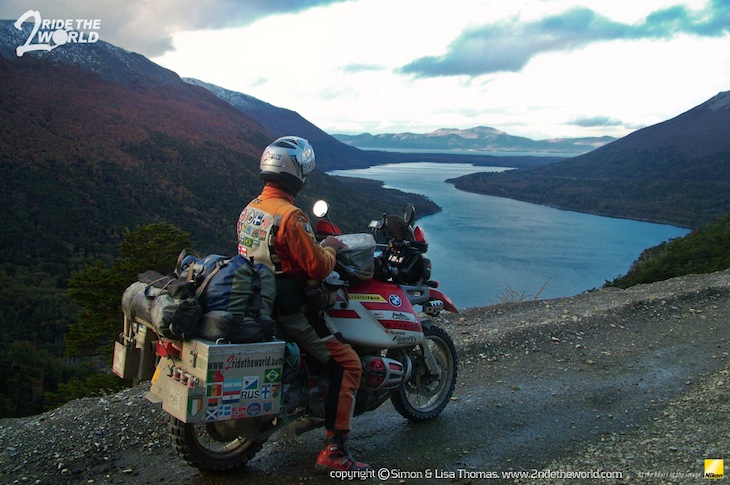 At last the enormous glacier came into view, over to our left and no sooner had we’d been given a glimpse then it disappeared as we round the next tight bend.  Some 10 minutes later and we were excitedly locking up the helmets, making the bikes safe and pulling out our camera kit.  We were like kids before Christmas.

The first impression of the Glacier simply leaves you breathless.  The sheer size and shape of the pre-historic ice field has your mind reeling as you try to grapple with is proportions. 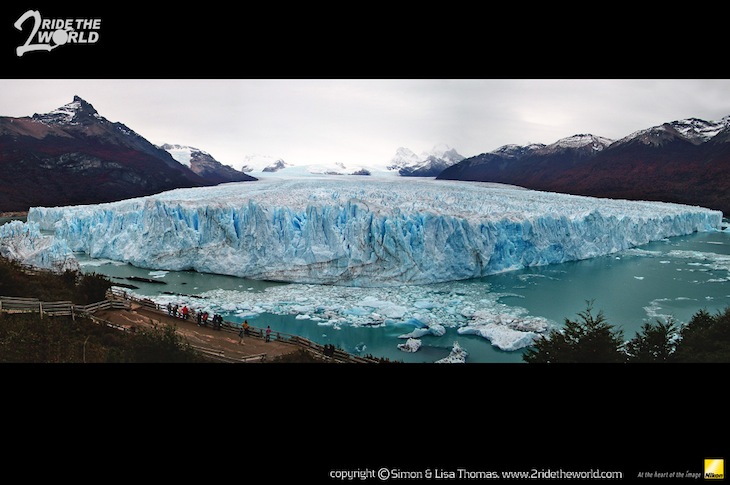 The grey over-cast day meant that I wasn’t going to get the photos I wanted but still, somehow it didn’t matter…we were here.  It’s strange but for some reason getting to the Perito Moreno Glacier for both Lisa and I held much more thrill than actually getting to Ushuaia.  We’re still not sure why?  Maybe it’s because we’d read and seen so much more about this awesome glacier than we had Ushuaia.

The Sun was doing it’s best to burn off at least some of the thick cloud base, occasional winning when a contrasting finger of white light would breach the seemingly impenetrable  cloud and highlight the dragon like scales of the Glaciers upper surface.

The Perito Merino glacier is in constant flux, groaning, creaking and moving ever forward at a rate of up to two metres per day.

By late afternoon we’d taken as many photos as we could and then it happened…the moment we’d hoped desperately to witness.  One of the towering ice blocks at the glaciers leading edge was pulling itself free.  Tell tale powder ice was dropping from around the cracks that joined this wall of ice to it’s parent.  Then with a thunderous elongated cracking sound that echoed around the valley it was done.  Thousands of tons of ancient ice had broken away and was now plummeting in apparent slow-motion 50-60 metres down into the milky blue ice water.  The rupture hit the water with incredible force sending water shooting into the frosty air and pushing out a mini tsunami, which spent the next 15 minutes bouncing off the ice-bergs that had littered the Glacier.   I was buzzing! It happens rarely that I have the camera out and was in the right place at the right time.  Chuffed or what! 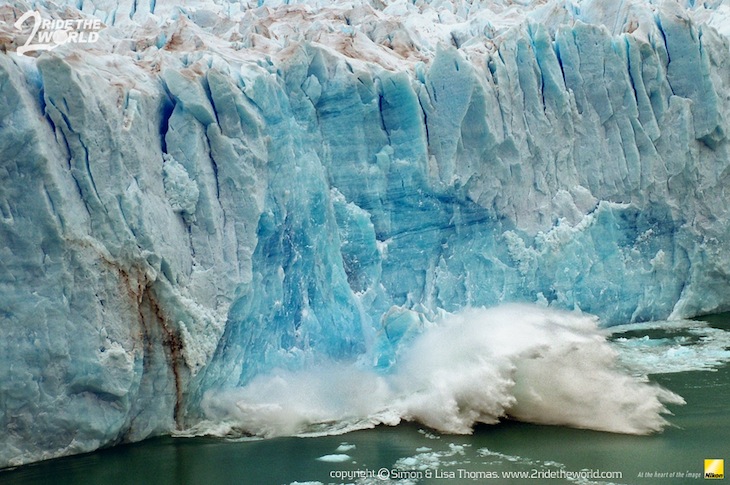 With the afternoon darkening we walked the 400 metres back up the worn wooden stairs to the bikes where we’d packed some food in the panniers.  Louis was having a good look at the bikes and with in a few minutes we’d made our various introductions and were compering notes on South America.  Louis was from Mexico riding his black BMW R1150GS, which he’d parked up two spaces from ours.  He’d been here for a while but in our excitement to get to the glacier we hadn’t even seen his bike.

It was time to get back to the white monster and so as Louis climbed aboard his bike we arranged to meet up in town around 8:00pm.

The whole experience was a little over-whelming.  Not that dissimilar to whale watching…you always want to stay for another 2 minutes.  I had to literally drag Lisa away. We needed to make a move, it was now dusk and getting harder to see.  And so as we turned our backs on the glacier we took slow reluctant steps back to the bikes not knowing when we’d return.  We hope we do. 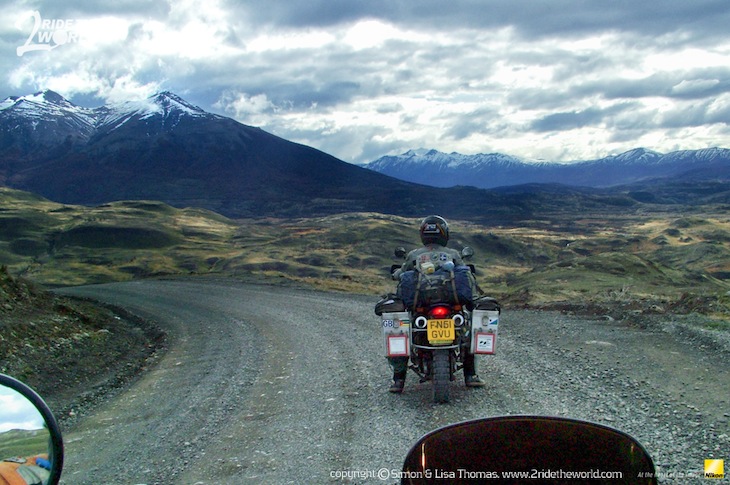 Louis pitched up at our hostel spot on 8:00pm and before long we walked the short distance into town centre and had found one of the towns more inexpensive eateries.

What a great evening…conversation flitted in and out of Spanish and English, good food was enjoyed along with great company.  We called it a day at around 1:00am.

Well, sat around a small low table with Estaban and Jose, with a rusting gas burner providing  a shock of bright white light, today didn’t seem too bad.  The reality, as our mud heavy clothes remind us, was actually very different!

By 11:00am we’d said our farewells to El Chalten with more than an occasional look over the shoulder as the unmistakable outline of Fitzroy’s jagged heights disappeared into the background.  I’d spent 30 minutes checking overt the bikes and had battled with Lisa’s bike nuts and bolts trying to tighten a chain that is obviously ‘giving up the ghost’, we have to hope it makes it to Mendoza. 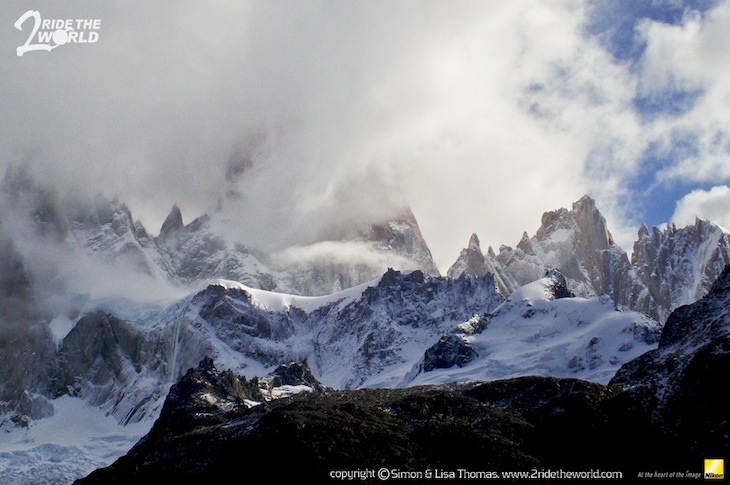 With our tyre pressure lower we’d hoped for an easier, or at least a more controlled ride back to the main Ruta 40. The ride into El Chalten on heavy, loose ripio had taken more concentration than it should, as we´d ridden in with road pressure tyres.

With the exception of a 5 km stretch running into Tres Largos we’d been taken pleasantly by surprise with the very new shiny asphalt. Even the wind hadn’t got up to it’s normal gale force 9. That said, by the time we’d reached the YPF gas station we were both in need of a hot drink. Slowly and painfully we brought frozen hands back to life cupped around the streaming brew. 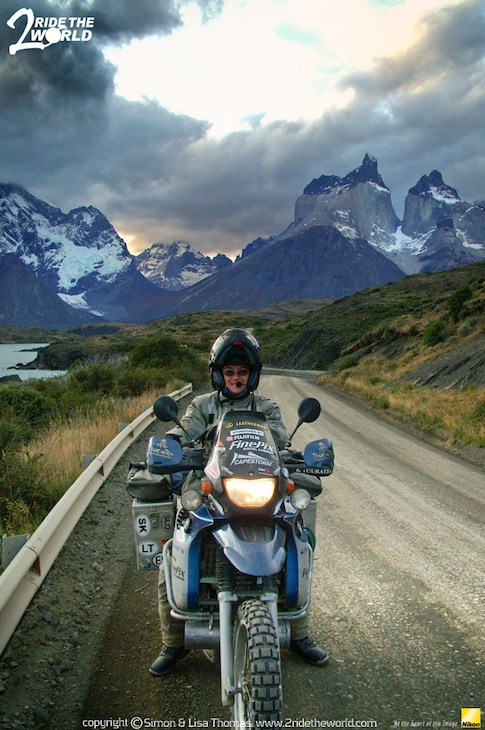 The planned 5-minutes pit-stop ran to 30-minutes as we´re both more than a little anxious as to what lies ahead.  We knew the upcoming section of South America’s infamous Routa 40 was one of the worst and the snow that had began to fall as we pulled into the YPF fuel station wasn’t helping our mind set.

With coffees and empanadas consumed there was no more putting it off, and so we began our battle as we shoved our hands back into already damp and sticky mud-laden winter riding gloves.  Back on the bikes, we kicked up the side stands took a deep breath and set off.

We were battling in minutes.  As if sliding about on the thick deep ripio wasn’t bad enough, we were now having to battle with visibility.  The earlier snow had now turned to freezing rain; glasses and visors were steamed up and lifting the visors to clear them only resulted in our cold red faces being stung by the falling rain.  Oh shit, we’ve got 400 plus km of this.  It was going to get worse.

An hour later and we’d travelled a diss-heartingly short distance, rarely getting out of 2nd.  The day was already getting long and painful and we’d only just begun.  As the rain eased, our problems continued.  The thick ripio had disappeared, much of it washed away by the water.  The bikes were getting harder to control, front and back wheels sliding about in the clay-like mud that had now become the norm.  Much like our experience in the Amazon the wheels were locking up simply due to the amount of mud that had compacted hard in-between the tyres and the mudguards.  The only difference being that this time we had to deal with freezing cold diss-functioning hands. 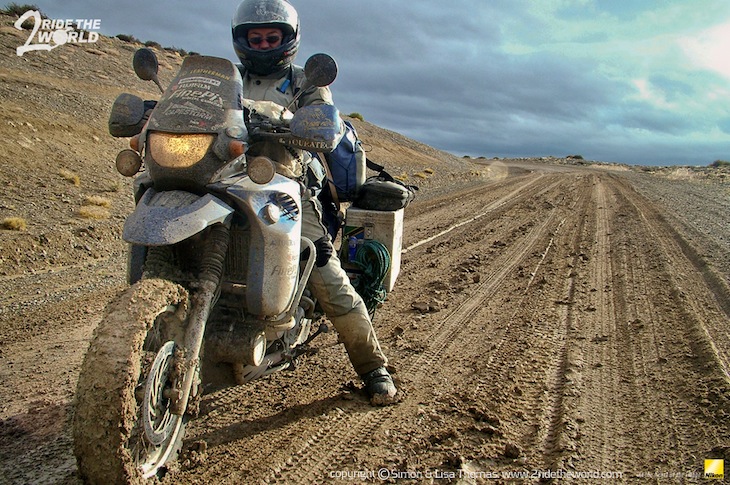 The dark heavy skyline was threatening more rain.  That was the last thing we needed. And so the day continued…by late afternoon changing gears had become a mission with frozen water-laden socks, squelching around inside heavy mud-laden motor-cross boots.  The front  ends of the bikes were feeling looser than a whore in a monastery and clumsy hands battled to pull in clutch levers.  There seemed no end.  The Routa 40 simply slid into the distance; we were getting tired and making life hard for ourselves. 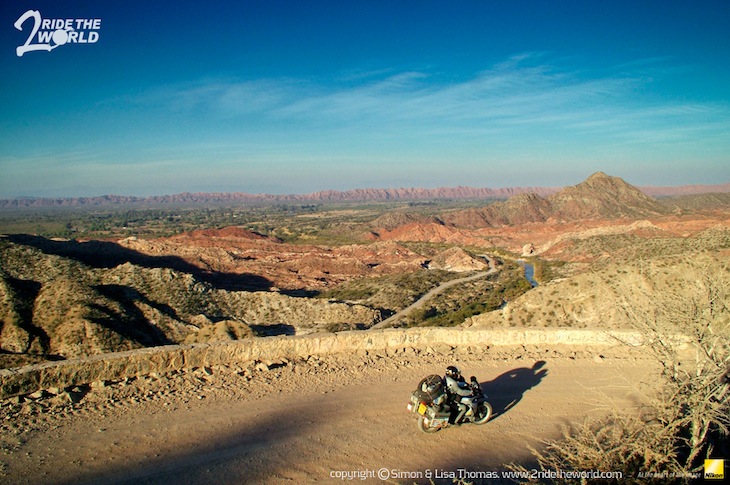 The Sun was setting and the day was darker than normal due to the thick cloud, we were going to have to start thinking about stopping and putting up the tent by the side of the 40.

We’d come through 3 hard stages of long deep mud that had grabbed the wheels and done it’s best to pull us off the bikes.  Here finesse, experience and motorcycle savvy all mean absolutely ‘diddly squat’, nada.  This was the 40 and right now it was getting the better of us.  Stabbing feet were shooting out desperately to find any kind of purchase as our heavy bikes moved in unnatural directions underneath us.  I’d ridden several sections for Lisa. With her shorter legs she’d have had little chance of getting through the bad sections without the bike going over.  I’d only managed to get by due to my height.  The last thing we wanted was to have to pick up the kit-leaden bikes in the slippery mud.

The small white sign for ‘Estancia La Siberia’ was a glimmer of hope in what had proven to be a long, cold, dark day.  I’d shouted over the intercom to Lisa and a few minutes later we were sliding down the short track to the Estancia.  Estaban had heard the noise of the bikes and was waiting to greet us. Some 20 minutes later we’d agreed a price of 50 Pesos for a room and parked the bikes in the barn.

What a day.  Right now we’re Estaban’s small kitchen, heat is slowly returning to our limbs and we’ve even managed to re-heat the stew we’d been carrying as left-overs from last night supper.  Yet again in moments of difficulty we’ve lucked out and enjoyed a great evening with new friends.  A very different end to the day than the one we’d imagined. 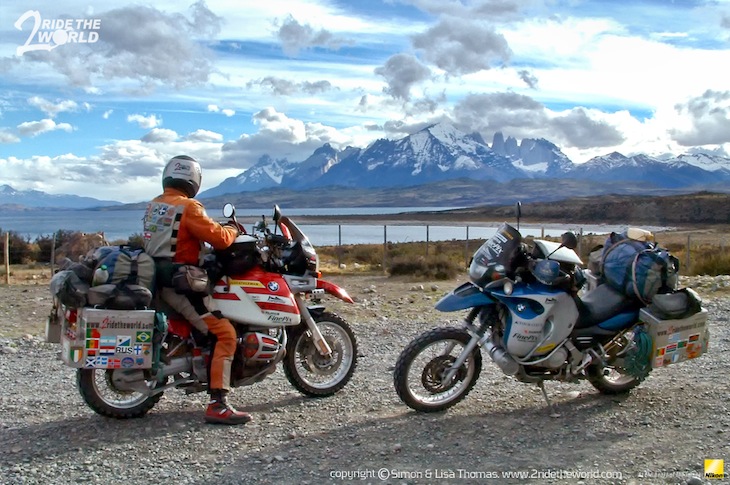