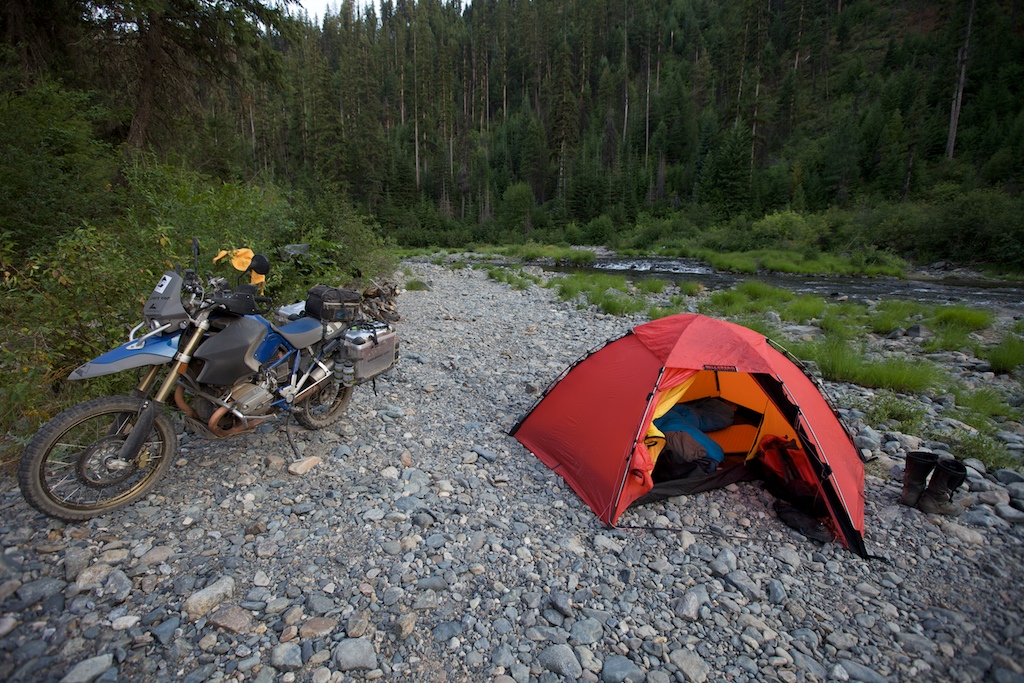 For the past year I have been using the Hilleberg Staika as my primary tent, spending close to thirty nights in it. I used it in the woods of the Cascade mountains while traveling the Washington Backcountry Discovery Route (WABDR) during the summer and early fall on my KTM 950 Adventure, setting up a new camp every night. Much of June found me leaving work Friday night to set up basecamp once again in the Cascades for scouting routes for the annual Touratech Rally, only breaking camp when it was time to head back to the office for the start of a new week.

Over the winter on the Friday nights I’d often run over the snowy mountain passes to the cold, windy deserts of eastern Washington in my pick-up truck to escape the rain and gloom of winter in Seattle. I normally find myself pitching camp late at night by headlamp so I can spend the weekend riding my Honda CR250R under the sunny dry skies. After all of this use, covering most motorcycle camping situations, I found myself understanding the charm of an expedition grade tent.

What is an Expedition Grade Tent?

Expedition grade tents are something many people don’t have experience with. While backpacking or sporting-good-store tents are a well know grade of tent, personally expedition grade almost seemed as a synonym for a big price tag. Looking at product feature charts only make it worse, besides the added cost, they also generally also added weigh and bulk when compared to their backpacking equivalents. Like with motorcycles, the brief product feature sheet can fail to properly emphasis the full benefits of a design approach that is uncompromised by cost. A product that is born of only the best materials and engineering practice to accomplish the required task will often find itself with this information lost in cold technical descriptions. I have camped a bit more than your average American, though it was never in the pinnacle of tent technology that is expedition grade tents.

Growing up my family had a cavernous L.L. Bean dome tent, while made of quality materials like other tents of its grade, it was a bulky, slow to assemble car camping tent. During my tenure in the United States Marine Corps I used everything from Korean War era two-man duck canvas pop tents, to modern lightweight MSR backpacking tents, and the Gore-Tex bivy sack that is part of the current issue three-bag system. The US GI issue Gore-Tex bivy sack became my adventure motorcycle camping set-up, this spartan accommodation satisfied my demand for a lightweight low bulk sleeping shelter that was quick to set-up, but it did so at the cost of privacy and comfort. After a recent look at the backpacking offering from the major tent makers, including Hilleberg, I have a hard time finding the prospect of giving up the features I have grown accustom to attractive even if I save a few pounds or liters of space. 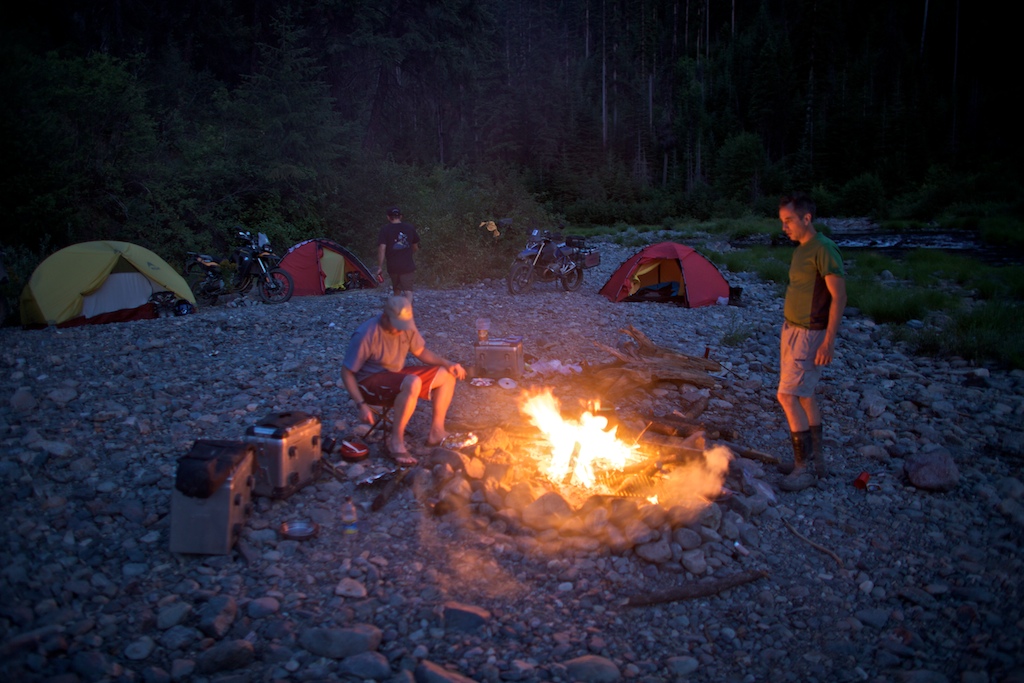 The Staika is part of Hilleburg’s Black Line of tents, this line contains all of their hard-core, any clime and place tents. Boasting features like equal length 10mm poles, Kerlon 1800 fabric (which has an incredible 40lb tear strength), four-season double walled snow-rated construction, and the ability to be erected without any staking. The Staika was the first dome tent that Hilleberg developed, back in 1989, and it is fully free standing. While many tents on the market claim to be freestanding, the Staika is truly totally freestanding including vestibules, a feature that makes pitching the tent on rugged terrain very easy.

You just roll out the tent and insert the three equal length poles, the rainfly, which extends all the way to the ground, stays attached to the main body of the tent. With a little practice this can be done in under 5 minutes, even on cold, rainy, windy nights by headlamp. Stakes are only required if it is windy, and even without stakes both of the vestibules are usable as they use the poles for support. Though the difference in set-up time might be only a ten minutes when compared to the more complicated lightweight three season backpacking tents, you do notice when you are always the one starting the fire at night while slowly enjoying the first hard earned beer after an epic day of riding and your companions are still absent trying to get their tent up and sorted.

This is a true snow rated, four season double walled tent, in the Hilleberg catalog one can find pictures of this tent at basecamps from the Himalayas to the numerous epic mountains of Alaska. While the snow rating generally falls outside what a motorcyclist needs, the value of the strength demanded by this feature carries over into situations that the adventure motorcyclist will face. I have slept comfortably in the quiet provided by the strength and stability of the Staika in sustained wind gusts exceeding 35mph coming off the Columbia River, all the while my colleges in lighter weight three season backpacking tents were laying in loudly flapping and collapsing on themselves tents due to the wind.

I have never shared this two person tent, the two entrances with double vestibules easily allow it to be comfortably shared with a friend. The double entrances and vestibules provide the additional space needed for gear as well ensuring both occupants have an easy way to enter or exit without the need to crawl over their companion

The application of extremely robust materials is found throughout the construction, with both the inner and outer tent being made from Kerion 1800, a 40 Denier Ripstop Nylon, 70 Denier Nylon fabric is used for the floor, and heavy duty YKK zippers are found throughout. A footprint is also available for the Staika, though after five years of service without a footprint the tent that I have been using still has a cut free floor, even with all of the rocky area’s it has been pitch. At no point did I look at a thorny bush and move where I would roll out the tent to set it up, I always had the piece of mind that this tent could handle more than I could ever dish out. The inner tent has fold down panels on both sides to revel mesh on the doors and a covered vent on the roof providing the same type of venting as a three season tent when the rainfly doors are opened up. The ability to close up all mesh, and the rainfly doors to block sand ingress and have the warming buffer air that only a double wall tent can provide is crucial in both cold or sandy environments. This adjustablity in the venting truly makes this tent suitable for any temperature.

The few extra pounds the Staika weighs, as well as the slightly larger packed size, and even the cost personally are outweighed by the benefits. The quickness to pitch, ability to deal with quite literally any sort of weather conditions, freestanding nature allowing the ability is pitch on one large rock, and durability to disregard the terrain make this the tent I will buy. Looking back at the nights below freezing as well as days peaking in the upper 90’s, the countless pitchings at twilight or well beyond, all the primitive campsites scattered across the deserve environment that is Washington state I never wished I was in a different tent, and often thought about how lucky I was to find myself in a Hilleberg Staika. 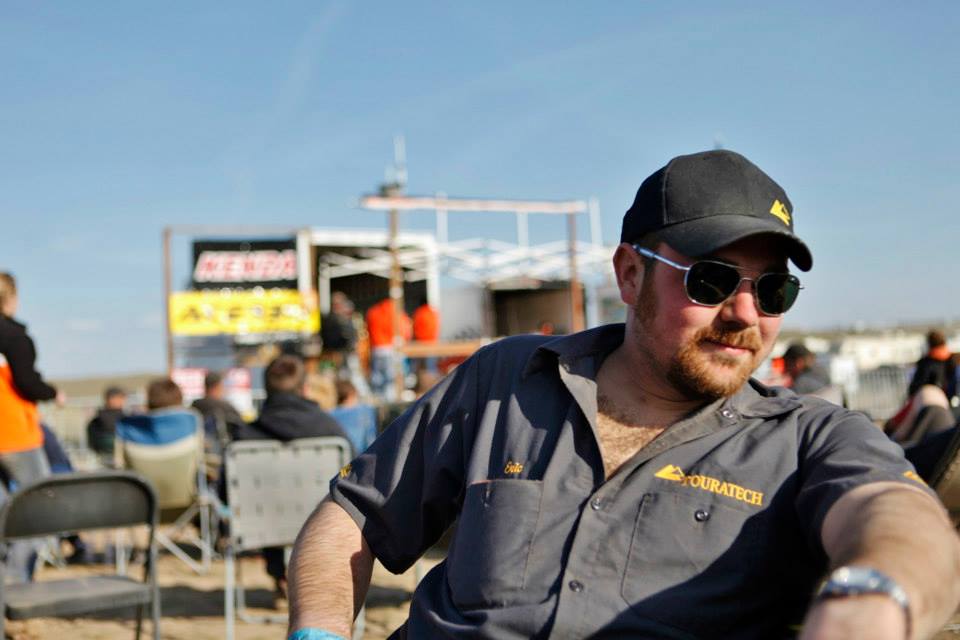 Eric is an incurable motorcycle nut. He’s owned everything from scooters to vintage motocross bikes and now spends much of his time riding and talking about adventure motorcycles. If you have been to the Touratech store in Seattle or called the offices, chances are you’ve talked to Eric. Eric recently came in second place in the adventure class at the Desert 100 Race. He’s a key part of the Touratech race team and when he’s not at the local Harescramble or Enduro event he can be found roaming the Cascade mountains on his KTM 950 looking for a good place to pitch his favorite tent.