In this video, the guys at Touratech give you the straight scoop on what it’s like to ride KTM’s new 1190 Adventure R. Over the course of three days, Touratech’s General Manager, Paul Guillien, and ‘Chief Riding Officer,’ Iain Glynn, switched bikes alternating between the KTM 1190 Adventure R and the legendary KTM 990 while riding in the mountains over a variety of terrain.

Camping off of the motorcycles gave them a chance to feel how the bikes handle when carrying full luggage and allowed time to sit around the campfire and reflect on the differences between these bikes.

How does KTM’s 1190 stack up against the company’s legendary 990? Watch this video to find out. 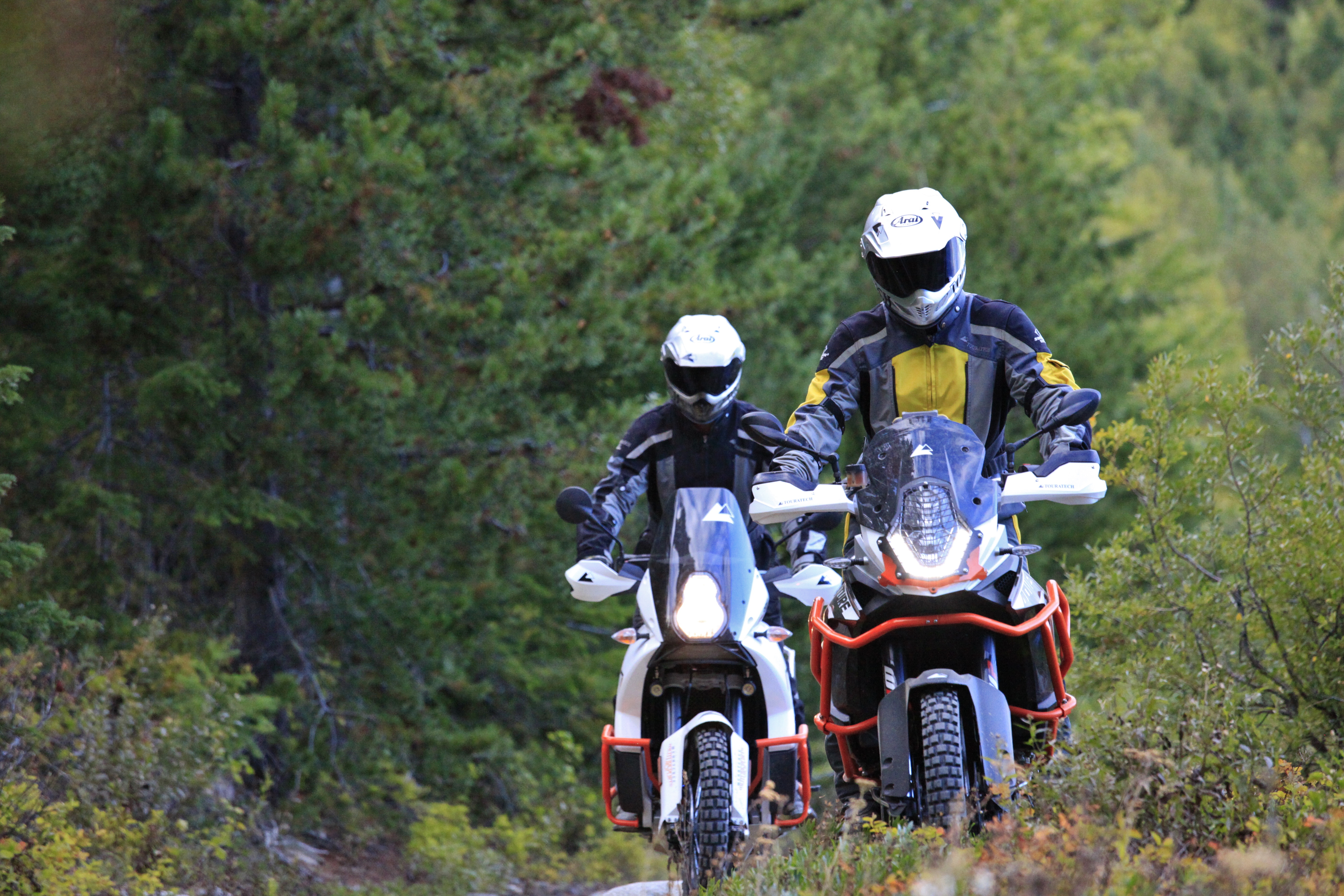 Paul: Iain and I have been out here in the woods riding the new KTM 1190 for several days now. We’ve been comparing it to the 990 and just trying to get a sense for what the differences are between the two bikes, and what we can expect from this new bike.

I love the brakes on that thing. And I think the suspension, for that heavy of a bike, for the extra pounds they’ve added, the suspension is incredible.

Iain: Well, the new bike’s got a ton more power. We knew that. It’s got incredible brakes. We kind of knew that coming into it as well. It’s a little bit heavier than the old bike, and we knew that as well. So, those are three things that we kind of expected and we really confirmed on this trip.

There are a few things that we learned that we really didn’t expect. The electronics package on the bike is pretty flexible and very usable. I think it makes the bike a lot more approachable for more novice level riders or intermediate level riders. 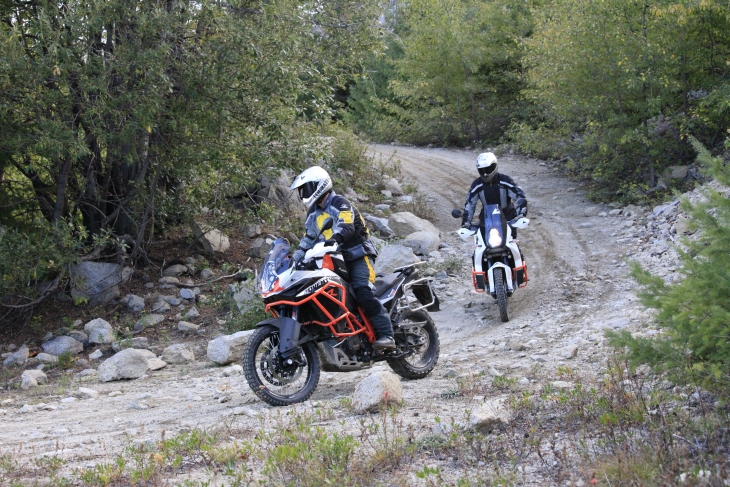 Also, I found that the 1190, they really increased the steering lock over what the 990 had, and it made it absolutely pleasant to turn around on a forest service road, compared to the older bike. It saves you from getting off the bike and having to push it backwards, which was a really nice thing. The suspension on the new bike, actually, it’s a significant upgrade from what we’ve got on the 990, especially when you consider how much heavier the bike is. Lastly, the looks, they really grew on us. It’s not a bad looking bike.

One great convenience feature on this bike is the adjustable compression on the left fork leg, and adjustable rebound on the right fork leg. You can really fine tune your forks without ever leaving the saddle. 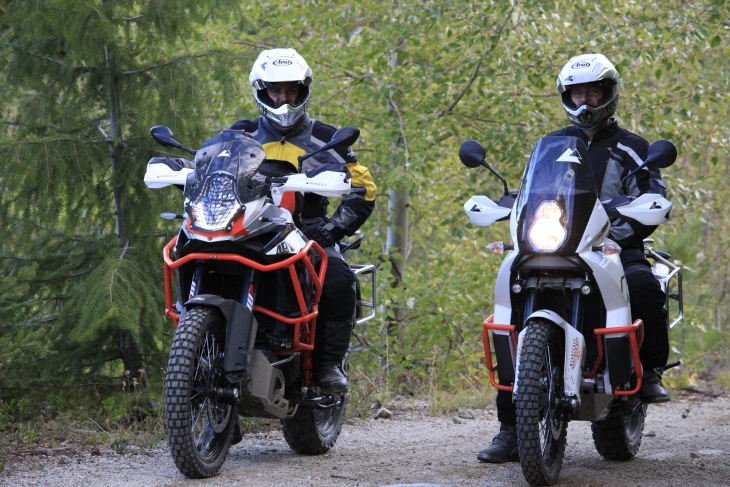 The electronics package on this KTM 1190 is one of the things that really sets it apart from its predecessor. You’ve got 14 different screens that you can access right here, and you control all of this with the little four button pod on the handlebar. Usually, what people are going to be doing is when they get onto the bike; they’re going to press the down button one time. That puts you into your drive mode selector. From here, you get into sport, street, rain, or off-road modes. These are the modes that change how much power the bike’s putting down and how the traction control is working.

At first, on the 1190, I thought that there wasn’t enough difference in the throttle turn between some of the different riding modes, but after being on this bike for a few days, I really think they nailed it.

We were in sport mode here, which is the full 148 horsepower, traction control off, and ABS in off-road mode. 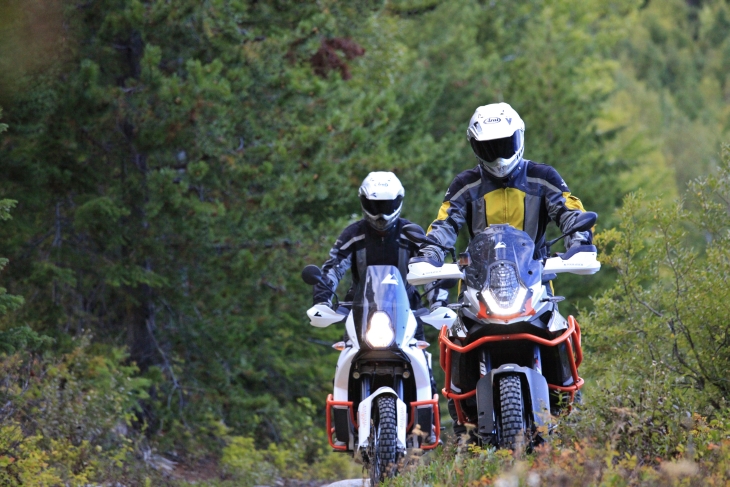 Paul: The modulation on the ride by wire throttle is incredible. You always can find the right place. You can stay in the same gear longer. You’re almost never in the wrong gear, where in the older bike, the 990, the power is more peaky. It’s a little trickier to get the throttle just right. It’s a lot easier to lose the back end, so the bike is much more stable and predictable and it really goes in a straight line, I think, better than the old bike.

This bike is designed to compete with the water cooled GS, Yamaha Tenere, the Triumph 1200 Explorer. I think out of those four bikes, this is the most capable off-road bike. I think that the BMW would be a close second, but they’ve really positioned the KTM brand to excel in the dirt and I think they really delivered on this bike for the off-road category. In terms of a touring bike, I think that some of the creature comforts on the BMW and some of the other things will win over some guys, but pure dirt experience, I think, in the 1200 class, I think this bike is on top. What do you think? 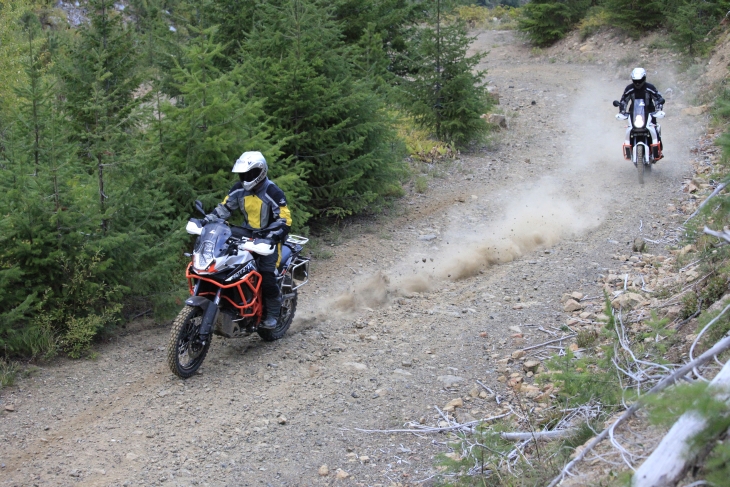 Iain: I totally agree. I think that if there’s no luggage on the bike, if you’re not thinking about touring with it, if you purely just want to get in the dirt and race, I think that a 990, the full height of 990 R, I think it still gets around a little bit better on the dirt, just the chassis feels a little tighter, a little bit more crisp. But, everywhere else, the big bike just seems a lot easier and a lot more comfortable and a lot more capable.

Paul: On the pavement, the thing is incredible. Iain says it sounds like a trophy truck. I think that is the perfect way to explain it. When you get on, you can just feel this horsepower that you’ve never felt on an adventure bike. 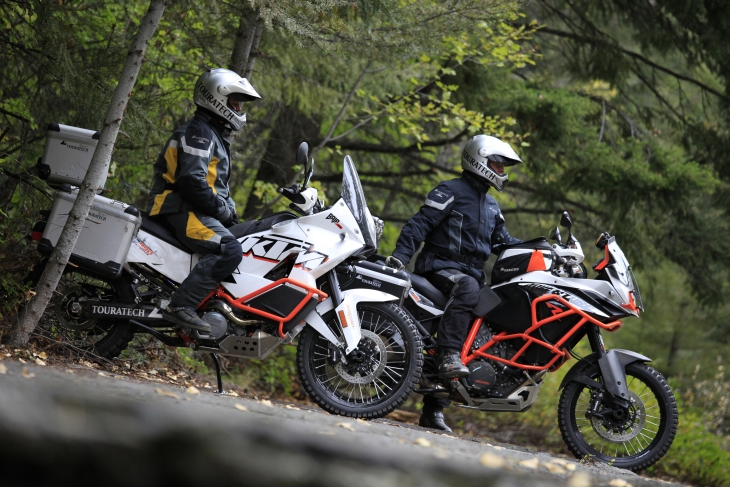 Iain: The handling on the pavement compared to some of the other big
adventure bikes, I think is a little bit hurt with the 21 inch front wheel,
but if you’re more of an aggressive pavement rider, the R model might not
be the one to look at.

Paul: Despite having 148 horsepower, 50 more horsepower than the old bike, or something in that range, whose fuel light came on first? 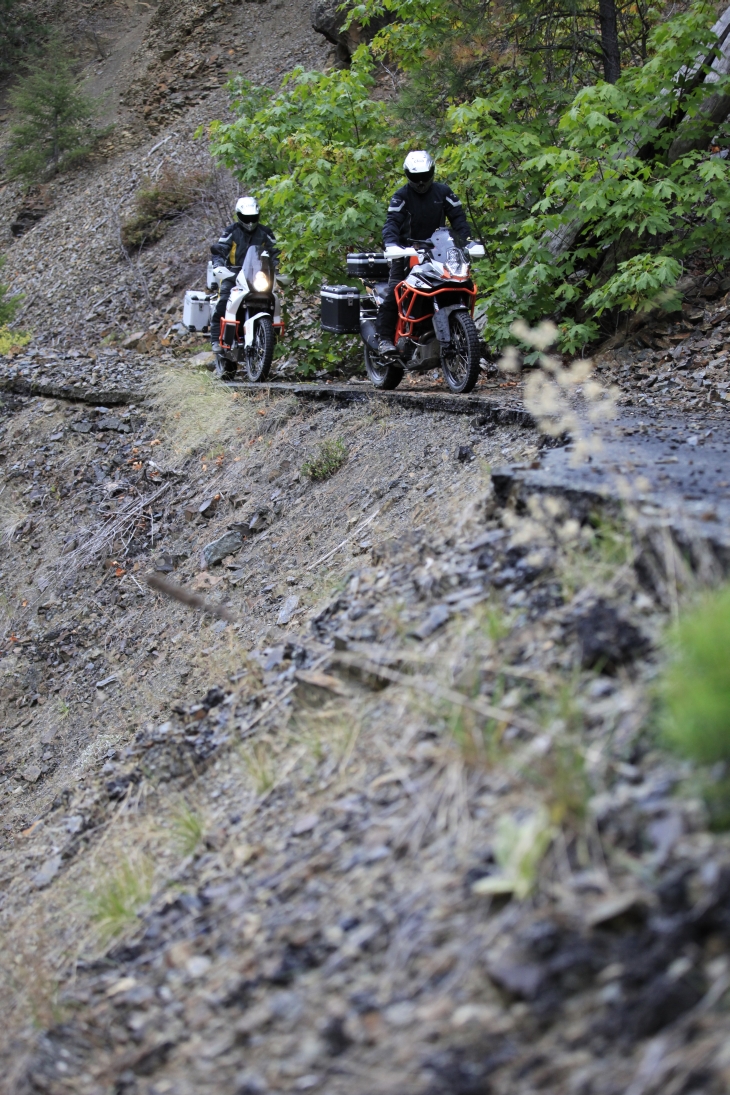 Paul: That’s been one of my biggest complaints about the 990 over the years. I’m really happy this bike’s got better fuel range than the old bike because the longer your fuel range, the safer you are.

If you’ve been thinking about getting the KTM 1190, you won’t be disappointed. More power, great handling, phenomenal brakes, carries the weight well, and it’s just a ton of fun to ride off-road.

Click HERE to see our complete line of accessories for KTM’s new 1190 Adventure.