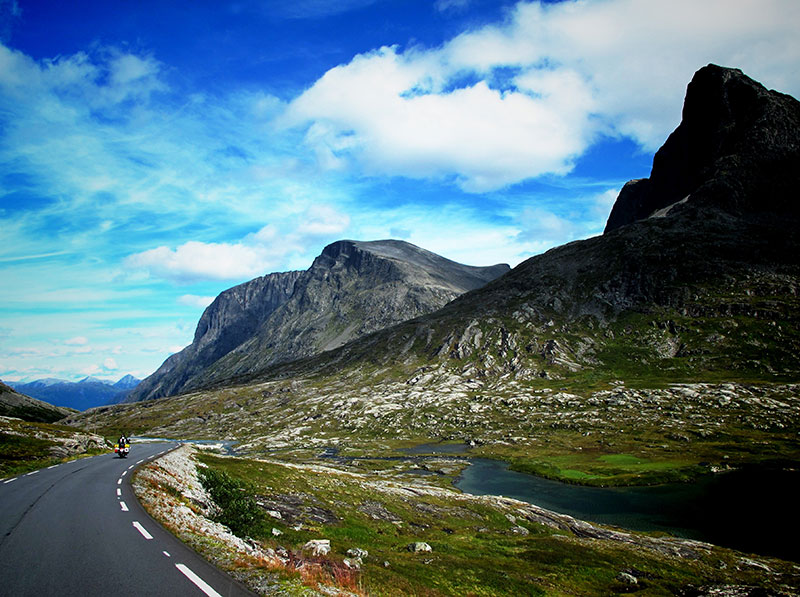 In late July, our friends at Touratech USA set up an opportunity for us to meet the crew at Touratech HQ in Niedereschach, Germany while getting a huge upgrade to our stock suspension on both our bikes. My bike, a BMW R1200GS was set for an Explore Front and an Expedition Rear while Nita’s F650GS Twin with it’s lowered suspension was getting a Progressive Fork and Shock Spring upgrade.

With Nita’s stature we had to consider seat-height when making a decision on which upgrade to get; the new Touratech Suspension series didn’t come in a configuration for factory-lowered bikes and while we could have opted for a set of Explore Shocks with a lowered seat, it still would have increased her seat height by about an inch and a half – a little too much to feel comfortable with a fully-loaded adventure bike. Rather, we opted for the spring upgrade which kept the seat height almost the same while giving the bike a much-needed boost in the suspension department. 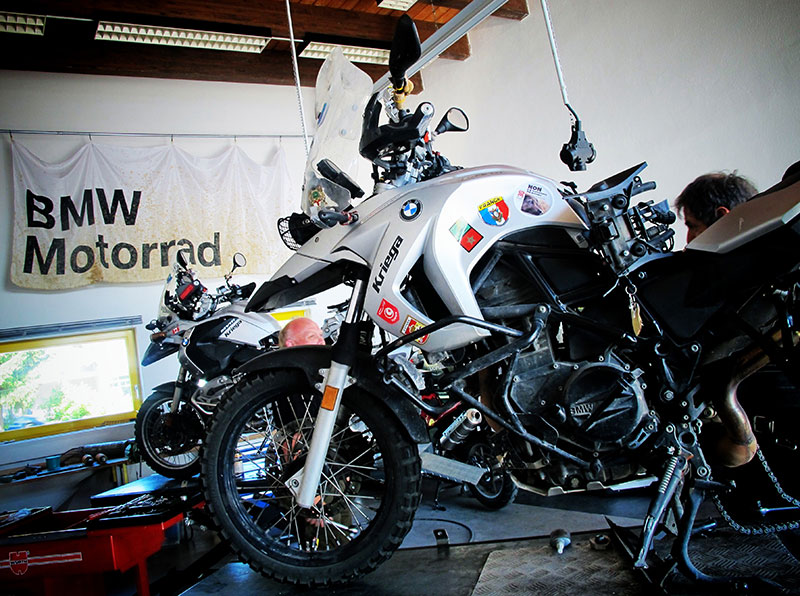 Even before beginning our journey fifteen months ago, we frequently heard of the stock suspensions propensity for failure – and usually at the worst possible moment. We’ve seen folks prepare for this eventuality by leaving a spare with loved ones, all the way to taking a spare with them on their journey – an option that was simply out of the question for us. When we heard that Touratech had developed an adventure-specific shock, we were excited to try it out.

Out of the box you can see a difference in the way these things are made. Frankly, it makes my old shock look flimsy by comparison. The list of features is long; 15mm of preload adjustment, adjustable high-and low-speed compression damping, adjustable rebound damping, a floating piston and a 16mm high-strength shaft. In plain language, it means that Touratech Suspension is designed to be stronger, perform more consistently under heavy use, and offer a greater degree of adjustability/customization. On paper and in our hands, they’re quite impressive! 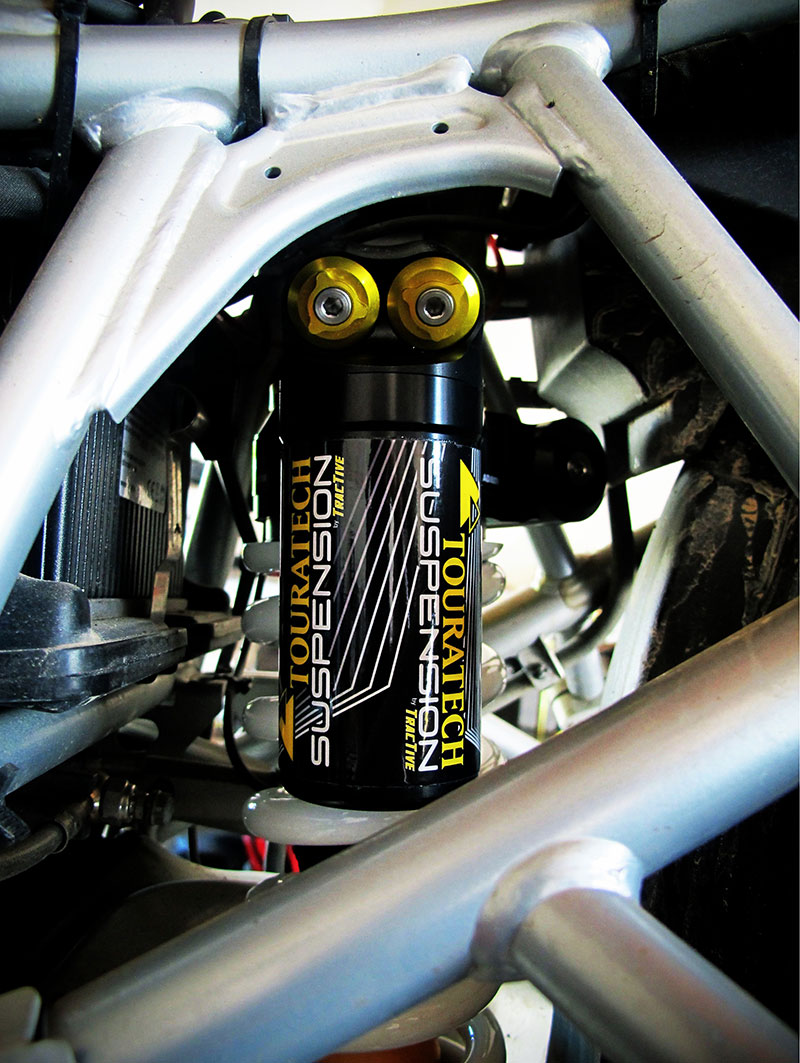 But how are they in reality?

For the first month after we installed the suspension upgrades, we travelled 5500+ km from Germany to north of the Arctic Circle in Norway, and back down through Sweden, Finland and the Baltic – mostly on roads of varying conditions – from excellent tarmac to dirt, and from wide-open highways to narrow twisting tracks. We hadn’t covered a lot of purely off-road terrain on this leg due in-part to time, planning and learning how to work with the new set-up properly.

Previously, my R1200GS used the stock ESA rig and I could tell it was beginning to suffer under the load of our first 50000km on the road. An increasingly bouncy ride left my confidence in corners seriously wanting and, at times, had me questioning my abilities where I hadn’t before. The feeling of being connected to the road was disappearing, and off-road the feel through the pegs and handlebars was vague. 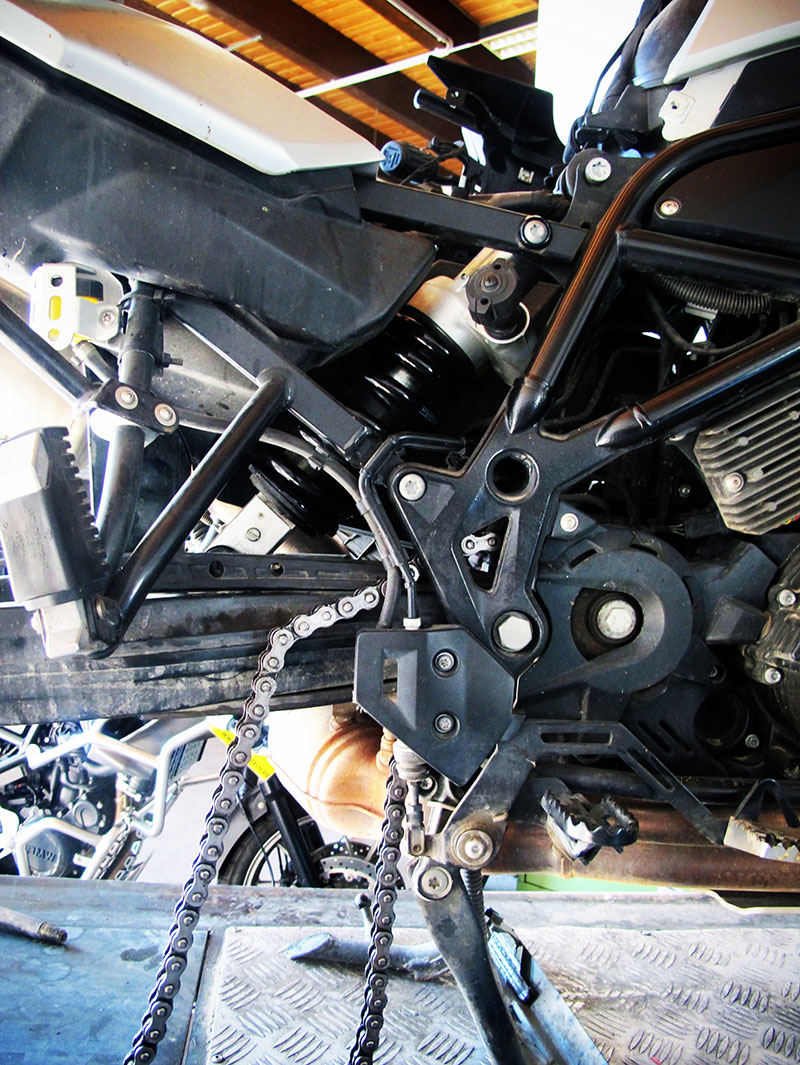 Using the ESA was, while convenient, simply not able to find a sweet-spot for the way I was riding with a ladened bike.

Nita’s suspension was in far worse condition. Her factory lowered suspension had frequently bottomed out on roads in Northern Africa, and off-road riding was feeling sloppy and uncontrolled. While her bike looked heavy, the load she was carrying (after weighing) was well within stock limits.

Riding our newly outfitted bikes back to the guesthouse from Touratech was our first eye-opener; never had the front-end felt so stable and planted. With the bikes unloaded and travelling at low speeds, they felt as if there was something pushing the tires into the ground. Nita’s experience was much the same. It was fantastic! Another interesting sensation was feeling much taller than we had before – something exacerbated by riding the bikes without their usual loads. Knowing that the majority of our journey would be spent aboard fully-loaded bikes, the crew at Touratech had set the spring-rate and suspension accordingly to improve our experience right out of the box. 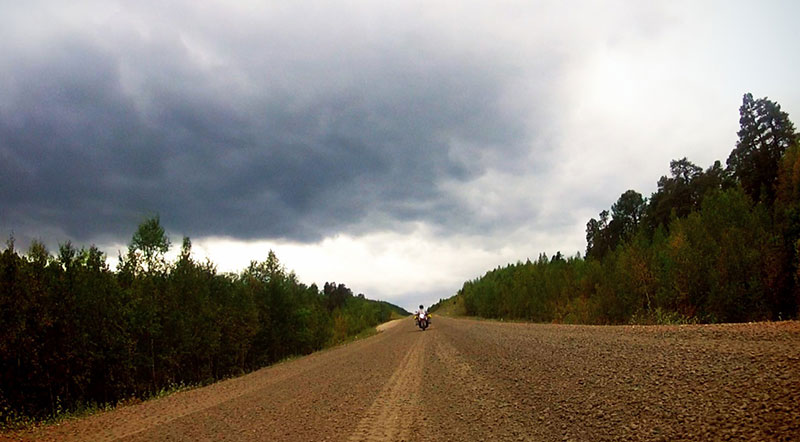 The next day we decided to take the unloaded bikes for a rip through the Black Forest to get an idea of how they would handle unburdened with the new suspension – a trip that produced the second eye-opener. In fifth gear, as the speed increased, so did the feeling that the bikes were about to deliver a substantial wobble. It was a reproducible feeling – any sudden inputs into the handle-bars created a wobble that left the front-end feeling disconnected from the rear. While it was incredibly unsettling, it was also a revelation as to how bad our previous setups were. Loaded or unloaded we could just plod along all day on the stock suspension never really appreciating what we were missing. A performance upgrade like this requires adjustment when the load changes. Lesson learned! We figured that once loaded, the bikes would behave themselves nicely.

To test the theory, we loaded the bikes as we normally would and left the damping and preload as set by Touratech. As expected, the performance was very good – the stability of the bikes was spot on from first to fifth gears and anywhere from 1 – 115 kph. With sudden inputs the bike immediately felt more planted and no longer threatened me with a high-speed wobble, but it was still a little twitchy for my personal riding style. A quick measurement of sag on the R1200GS revealed that a little more preload was needed and, after dialing it up four clicks, the improvement in handling at speed was instant. 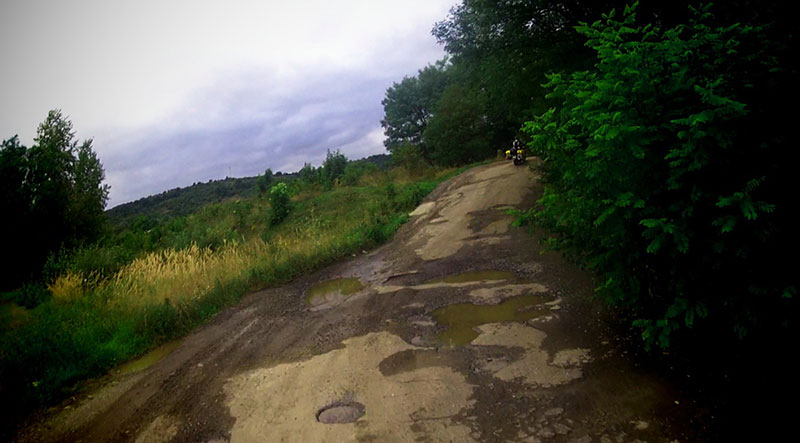 With the sag set to where it needed to be, I adjusted the high-speed compression damping and rebound damping by a couple of clicks each and the change in bike-feel was simply astounding. While turning these tiny adjusters I have to admit my faith in them making a substantial change to handling was pretty low, but after taking the bike to 130 kph/80 mph, it never once protested – even with sharp inputs. It was a remarkable change. While the level of adjustability could be a bit daunting at first, it allows the rider to create exactly the feel they want. Like plenty of feel from the front? You can do that. Like to feel tall? You can do that. Like a hard ride? You can do that. Whatever you want, you can set up Touratech’s Suspension with very little effort.

Off-road, I can honestly say I’ve never felt so confident. While I’d like to reserve my opinion after many more miles spent in the dirt, the initial rides have been incredibly promising. Once again there’s a feeling of being connected to the ground that completely evaded us before and a responsiveness to inputs that puts the bikes where we want them without debate. 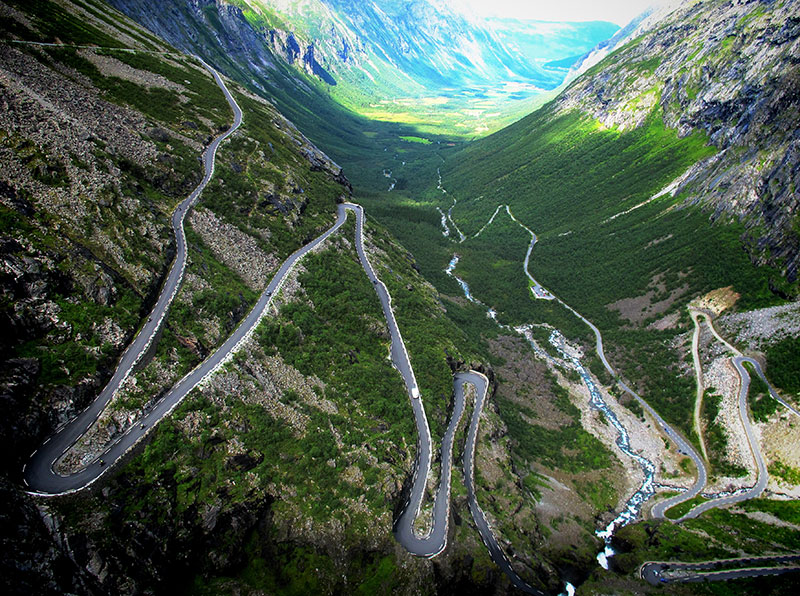 While Nita’s Touratech spring upgrade offered less adjustability (since it’s using new springs with stock hardware), the difference in her riding has been incredible. Her F650GS had always been spongy and vague when loaded. The result had been a steady decline in confidence in both the bike and her own skills. On fast roads the stock springs felt unstable beyond 110 kph/68 mph while tight roads and switchbacks sometimes caused bottoming-out under full-load.

In Nita’s words, the new setup has completely changed the way she rides. Feeling more planted and in control, seeing her fade into the distance as I overtake on the highway is a thing of the past. Now, she’s right there with me feeling very comfortable into the mid 120’s (75 mph). In switchbacks and corner-rich roads she’s also discovered a new level of confidence, gliding through the turns in a way that more resembles her time on a sport bike than the stock F650GS. It’s incredibly satisfying to see the bike catch up to her skills after all this time on the road. 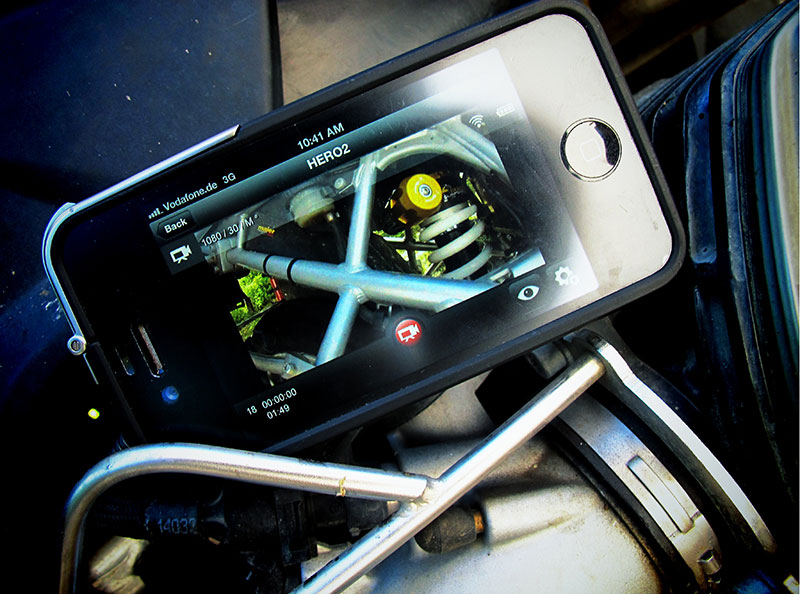 Off-road, the difference for her is also much improved. We should note that she uses two different settings on her bike for highways and twisties – a small preload and rebound adjustment that takes about 30 seconds which creates the right feel for her.

Before this test I’ve honestly always looked at suspension upgrades as expensive and daunting, but now I couldn’t imagine our bikes without them. Of every upgrade we’ve ever made to our bikes (current and previous) none have fundamentally changed the bikes performance – or the way we ride – as much as these have. For our journey, having suspension designed specifically for fully-loaded adventure bikes has made for more fun on (and off) the roads, and removed one more item from our worry list. 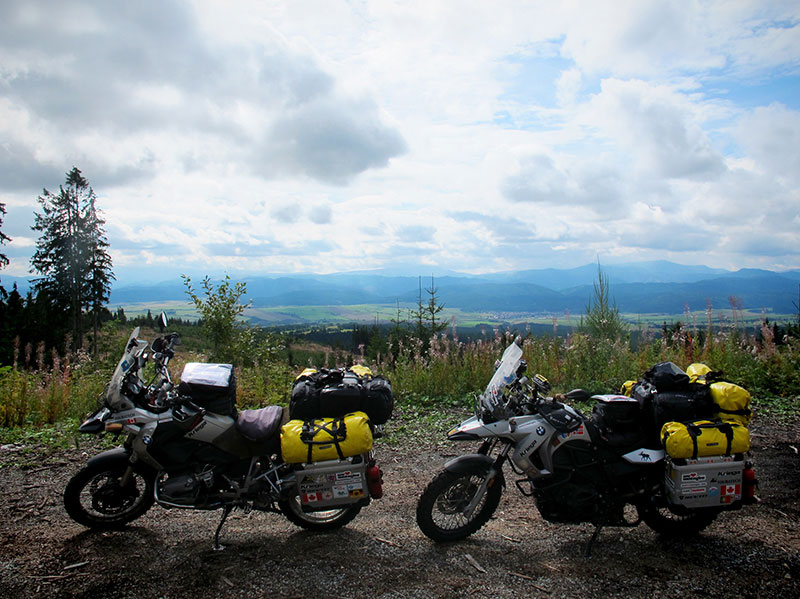 Touratech’s Suspension offering has been an eye-opener for us and the mix of durability, adjustability and performance has us riding what feels like two new bikes. We’ll report back in a few months after we’ve put about 25000 km on them but our first impressions are extremely good and we’re excited to continue putting this incredible piece of kit to the test.

Click HERE to learn more about We Love MotoGeo.