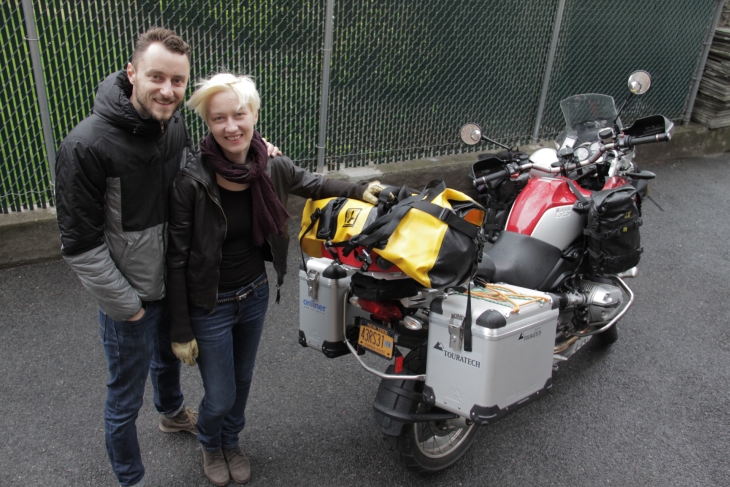 Tioma and Aliona are aspiring filmmakers and adventure motorcyclists who have been travelling the world aboard their BMW R1200GS for the last few months. Having ridden from New York to San Francisco and then to Washington for the 2013 Touratech Rally, Tioma and Aliona are an inspiring couple with a bright future. Now back in Brooklyn and planning how they can continue their journey into South America, we sat down with these two ADV enthusiast and asked them a couple of questions for our fourth ‘ADV Interview.’ 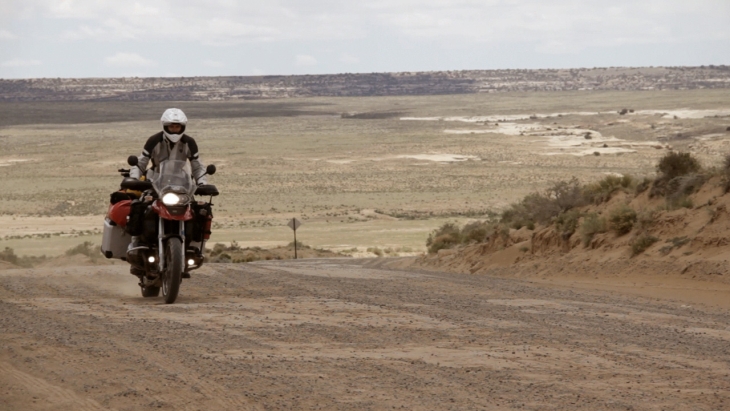 Tell us about you first motorcycle…

My first memory of being on a motorcycle is quite blurry, I don’t think I could even walk at the time. It was my grandfather’s beloved IZH Planeta with a sidecar, something every Soviet rider was ready to frame on the wall next to a marriage photo. I think I was so impressed of that machine when I saw it first time that he decided to put me on the tank and let me sit there and play with the controls. That smell of low-octane gas mixed with aromatic fumes of his favourite hand-rolled cigarettes (he used old newspapers for that and advised if I was ever to start smoking I should make sure to avoid printed images as they tasted horrible) planted something in me that with years grew into my passion of exploring the world around on two wheels. For many years his garage was my best summer-time playground. I could spend hours standing behind him watching or helping out when he was working on the motorcycle, trying to solve the puzzle of what exactly happens when you kick start. My toys where wrenches, hammers and pliers, cans of fuel oil and grease hidden on the shelves around the garage, wheels without most of spokes hanging from the ceiling, half-taken apart gearboxes and carburetors soaked in gas, crates full of bolts and old rusty nails that had to be straightened to be reused. Getting my hands thoroughly dirty was a matter of just a few minutes, the pleasure of washing them next to my grandfather was eternal.

As I was growing up I started replacing him behing the handlebars more and more. Simple Soviet farmer’s life involved a lot of early morning rides across the fields and meadows in search of the best grass to mow before the sun was too hot and the grass too dry. Those long backcountry journeys established my love to rougher terrain, challenging potholes, occasional water crossings and vividly exposed how that squeack of bottoming down suspension and higher revs on lower gear may spark a feeling of real happiness in the middle of nowhere.

That motorcycle became our family legend. Years before I was born my uncle used to snitch it every single weekend night to go out to the next town in search of adventures and to cling impressed girls. In my teens that IZH Planeta prooved to be durable enough to be snitched even more frequently. The challenge was not waking somebody up or sweeping the traces before sunrise. There was never enough gas to satisfy our youthful need for riding.

What inspired you two to travel?

Our parents were not quite keen on travelling so it’s hard to tell where that inspirtation to travel came from. We seem to always have felt that the city we lived in was too small for us. There was always something more to see, taste, feel or experience beyond the boundaries of our country. That feeling of sitting on a packed bag ready for departure to be announced became part of us long ago. Before we realized that the best way to travel is on a motorcycle (we really mean it!) we used to love flying. We know a lot of people who have visited more than a hundred countries on every continent, and even more people who have never been further than a local Walmart. With more than 20 countries behind our belts we feel that we still got years to explore as many of them as we’d possibly could. 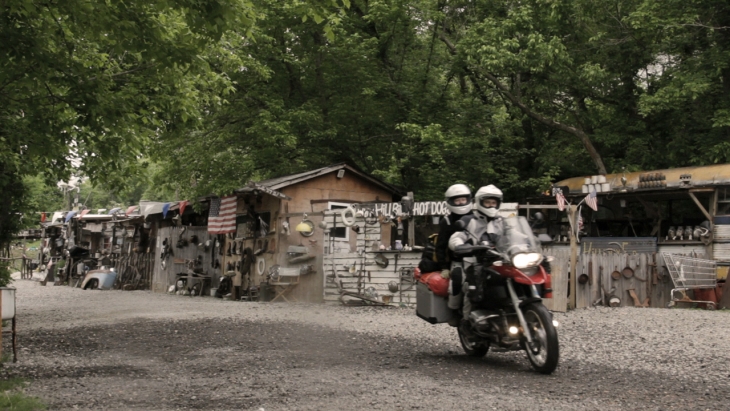 We sincerely love our BMW R1200GS. The second we both left the dealership we knew exactly why motorcycle magazines like to use the words iconic, ultimate etc Not easy to explain, but we felt like it started demanding bigger roads from us. Sunday rides were getting longer and longer, routine oil changes seemed to be happening almost on a monthly basis. We fell in love with small backcountry roads and with the purchase of a GPS unit discovered the joy of “getting lost” in a controlled manner. Fantastic feeling!

Before that we explored campsites and smaller roads on a BMW K75. In Europe scooters seemed to be the only choice of commuting. The bikes I rode before that include almost every model of Soviet motorcycle manufacturer. Did I really like them? Not really, I love riding more than spending hours fixing things. If you ever owned a Soviet motorcycle you will understand.

Tell us how you’ve outfitted your bikes for ADV…

As soon as we got the GS we knew it needed crash bars. I’ve seen quite a few < 10mph accidents at various traffic lights ending with an ugly spot of oil under the motorcycle. It seemed to be the most important accessory for an everyday use of a wide boxer engine. As soon as we started taking it off-road we equipped it with a skid plate and hand guards. From that second on every time we heared stones hitting the bottom of our beloved GS we knew it wasn’t necessary to stop and look underneath in search of expensive repairs. It gives so much confidence and helps to concentrate on enjoying the ride rather than avoiding sketchy terrain. After a few drops off-road we realized that having a throttle potentiometer guard is a must too, that vital plastic part seems to be too naked on that bike. On top of it after one of the inspections while cleaning loads of mud off the GS I insisted on having lambda sensors covered too.

For our cross-country trip we were looking for a bulletproof and reliable luggage solution. Going two-up is a challenge in terms of packing as you can imagine. Our choice was a set of aluminum panniers from Touratech. Most of our filming equipment was securely stored in a 45L pannier while the smaller 38L pannier was our “fine dining” kitchen for the next 10 weeks.

We used a luggage rack with one one gallon Rotopax fuel cell mounted to it. It added confidence on longer stretches of lonely smaller roads. On a few occasions we had hard time finding better quality gas, in certain remote areas gas stations were simply closed on Sundays. So I quickly turned it into a habbit to have my fuel cell refilled with Premium on every second gas station stop.

Our clothes and sleeping bags were securely protected from rain and clouds of dust inside a large heavy duty dry bag. Fell in love with it instantly, such a practical luggage item.

Anything I should have added before leaving? Definitely a pair of serious handguards instead of those simple plastic ones. 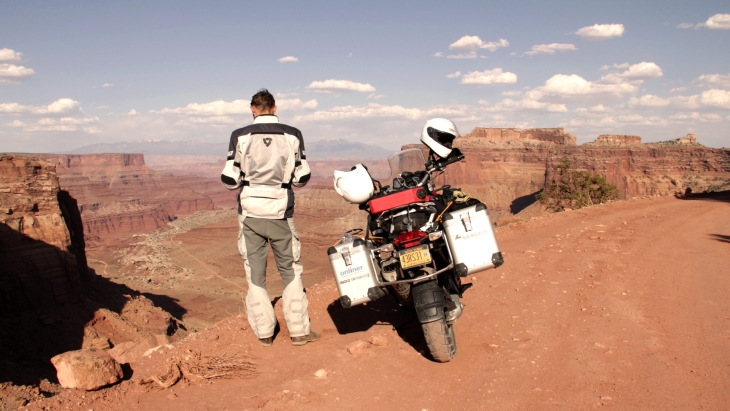 It’s sad to admit, three alarm clocks set up to ring one after another with a short interval in between. Gives a little time to enjoy the last part of the dream, stretch and yawn in peace before Brooklyn’s morning rush hour takes over. I wish it rather was our dog asking to go for a walk.

We should mention that Iron Butt and similar motorcycle-enduro-challenges go against our philosophy of enjoying every mile on the road. We like to take our time, explore the unpaved and make sudden decisions at the crossroads, look for unexpected breathtaking views and stay longer at places that seem to have ability to endlessly amaze. So the longest we spent in the saddle was about 10 hours with an average of 500 miles. In the middle of tornado season we happened to be in the middle of tornado alley when things started going terribly wrong. Escaping the alley was our only solution to being safe. Two days after we left the place we got to know that most of the area where we used to stay was demolished. Very sad reality. 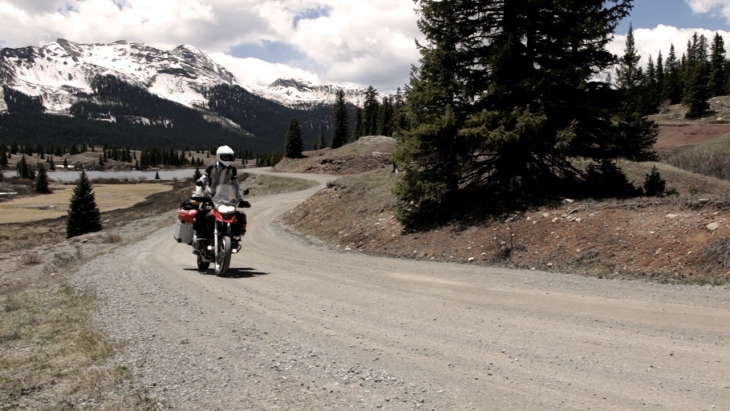 I bet we will be missing that moment forever. We had a priviliege to be exploring steep dusty swipes above the Colorado river in Utah with a 360 sunset view two up on our trusted motorcycle pretty much in the middle of nowhere. Experiencing that mix of exagerrated excitement with a hint of anxiety, that feeling of being 100% concentrated on the rought terrain and registrating every little victory after challenging sections of the dangerous road was absolutely stunning. That alarming smell of burnt clutch spiced the moment up adding biter flavours to our memories. Living through that one-in-a-lifetime motorcycle adventure moment was worth every second and every cent spent on preparation for our trip across America.

It’s very simple: set up the departure date and stick to it no matter what! You will be surprised how things start working out and self-organize as you approach it. You can soon find yourself telling stories about the life you have been dreaming of. Another one would be: overplanning kills the fun of adventure riding, let things happen as you go. Best stories are born when destiny starts playing jokes with you. And one more: you won’t use even HALF of the gear that you plan to take along. Take cash instead.

Why do you ride?

Certainly to experience that breathtaking acceleration, carefully ‘fall’ into tight repeating curves, get myself into a controlled rear wheel skid paired with that explosive acceleration on a dirt track. How can’t one love it?

I enjoy learning new skills and using them. It’s such a blast when you start riding on and off-road with confidence. Overcoming challenging terrain pairs so well with enjoying the views of lonely backcountry roads, top of the mountain sunsets and chilling early morning air. Throwing myself into a fight with the obstacles on the way is a natural part of my well-being. I think we both ride in pursue of those challenges to be happy. Aliona loved our recent trip so much that while working on her motorcycle license she is scanning the market of entry level dual-sport motorcycles. Riding together would be such a dream!

Riding at night with 12 other teenagers all aboard my grandfather’s heavy motorcycle IZH with a sidecar was dumb. It was dangerous and fun though. The dumbest thing I suppose was agreeing to sit on a side wheel fender that night when we flipped over. 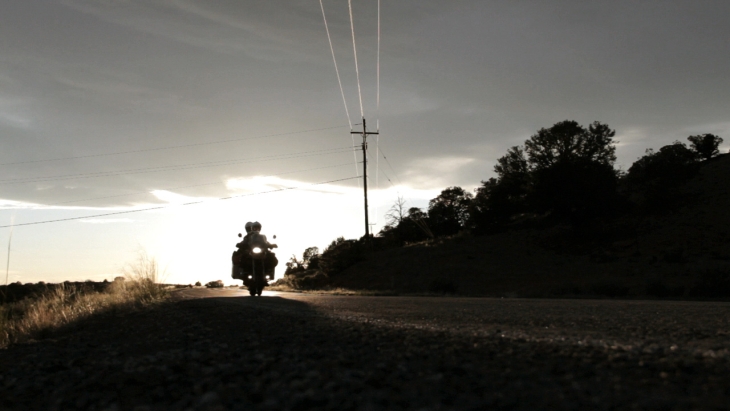 What’s next for Tioma and Aliona?

Our idea of crossing USA two up from New York to San Francisco with the fiming equipment and a laptop turned out to be a stunning 10-week adventure. We met so many out-of-this-world personalities in search for interesting interviews for our video web-episodes, we stopped at places one would normally escape, talked to people we’d most likely try to avoid, pushed the limits of our personalities on a daily basis. And loved it! 12,000 miles of beautiful local roads, backcountry routes and dirt tracks blended with unforgettable people we met was quite a good start. As soon as we crossed the Brooklyn Bridge we went on planning our South American round trip. With a little more information in hands we will set up the departure date and from that on, as I mentioned above, there won’t be a single excuse not to hit the road in search of new adventures.