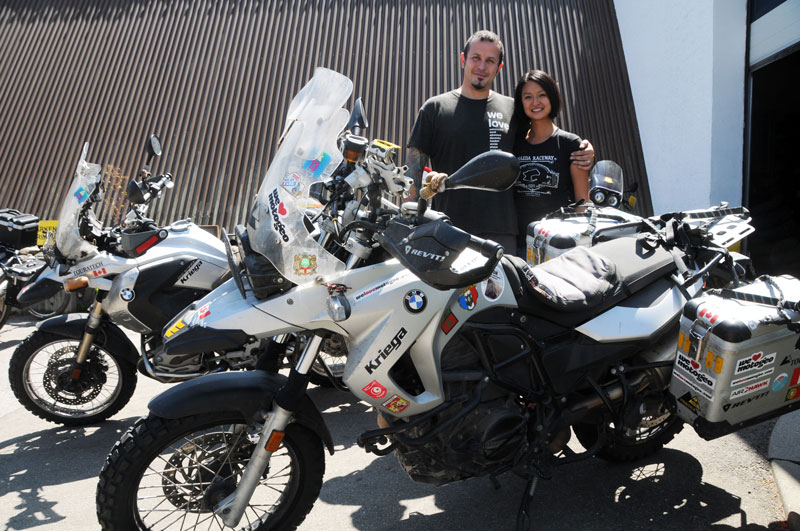 A little more than a year ago, Issa and Nita Breibish set out for a journey into the unknown: They left their hometown Calgary in Canada with a BMW F650GS and R1200GS in order to discover something new. After more than 40,000 km they made a pit stop at Touratech in Niedereschach to equip their bikes with new shock absorbers and fork springs by Touratech Suspension to be prepared for the rest of their world tour.

In order to make their dream come true, Issa and Nita sold almost all of their belongings. They put the remaining things on the back of their motorcycles and ventured out into the world. “We neither are extreme athletes, nor are we crazy. We just took the opportunity to do what we love to do: going one step further. The experiences will change our lives”, they are sure. Furthermore, they want to support “Lost for Good” with their travel project, a non-profit organization with the aim of helping people at the edge of society.

Canada, Great Britain, France, Italy, Sicily, North Africa, Sardinia, Spain, Portugal, Morocco, France and Switzerland already lie behind them. After more than 40,000 km, they did not only want to experience the Black Forest in Germany, but also get their bikes’ suspensions optimized at Touratech in Niedereschach to be well-prepared for the rest of their world tour.

Both their bikes kept up well, but the heavy load and the fully laden panniers and bags were increasingly taking their toll: “The suspension of my lowered BMW F650GS had been too soft. The motorcycle bottomed out more and more and felt unbalanced”, Nita described what bothered her. Despite the factory-made lowering, the spring set by Touratech Suspension provided a remedy. As a result, the responding qualities and the shock absorption have been increased.

Ever since Africa, Issa was complaining about decreasing damping and a spongy feeling. The Explore Shock absorber for the BMW R1200GS’ front wheel and the Expedition Shock at the rear provide much improved riding qualities and a better bottoming resistance despite the heavy luggage. A friend from the U.S. had already recommended Touratech Suspension, Issa says. For the rest of their trip, he now has a suspension specially designed for adventure riding.

The Touratech Suspension shocks and springs had been mounted right away in Touratech’s workshop. As a special service, the tire change long overdue had been done, too. Now, the nice Canadian couple is ready to explore the rest of the world without having to worry about their suspension. Next on their list are Benelux, North and East Europe, Russia, Greece, Turkey and South Africa.

Click HERE to learn more about We Love MotoGeo