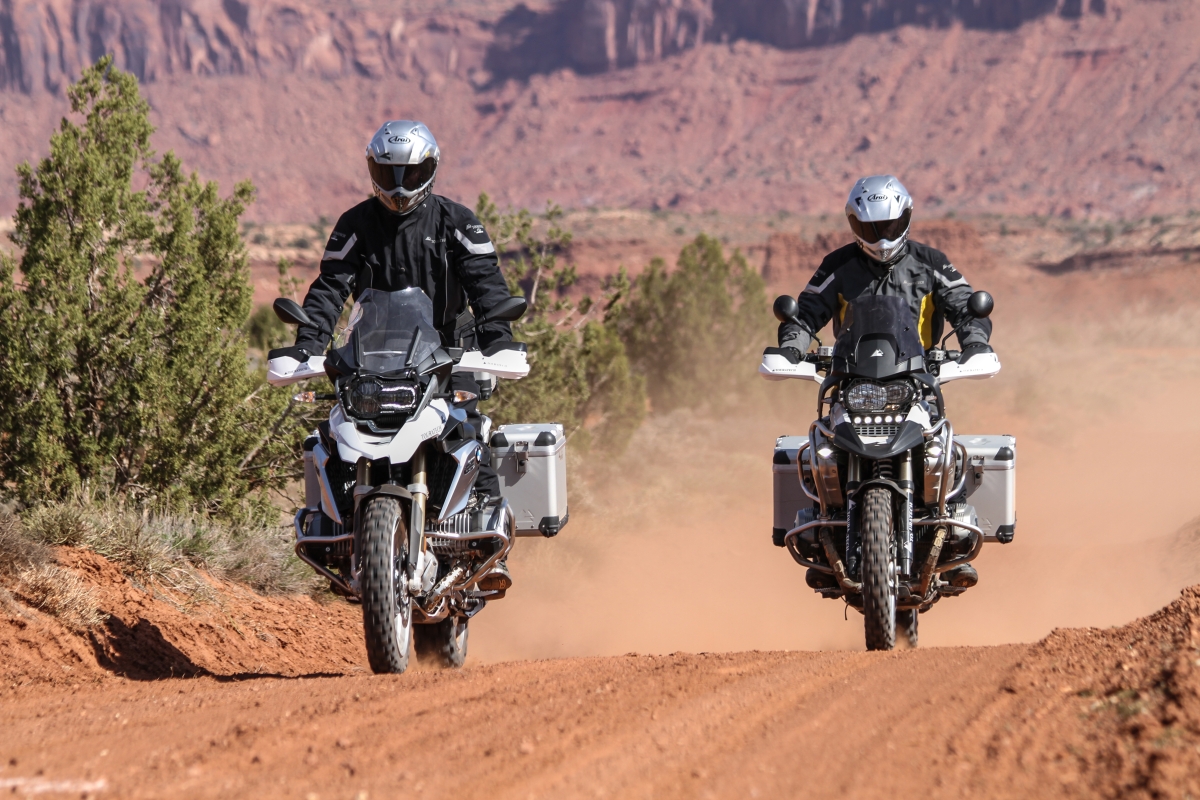 In our opinion, there’s really no better way to compare two things, than to put them side by side. It’s an excellent opportunity to observe obvious differences and to note the things they have in common. So when BMW introduced their new water-cooled R1200GS motorcycle, naturally we wanted to compare the new bike with the one it would be replacing, our much loved 2011 R1200GS. For the comparison test we headed south to the lonely roads and back country byways of Utah to spend a week riding the bikes both on and off-road. There was only one rule for the week-long comparison, we had to switch bikes each time we filled the gas tank. 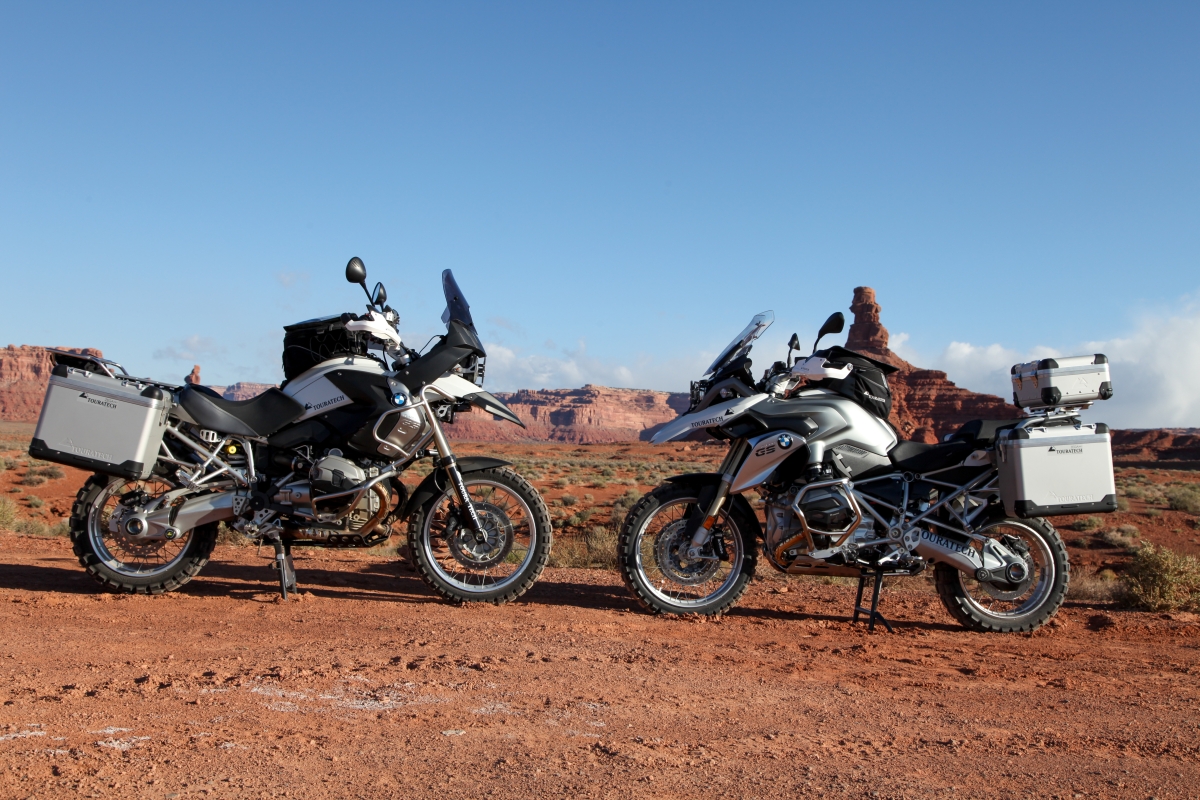 Here are the key features that that we feel differentiate the new water-cooled R1200GS from the oil-cooled model:

The first things we notice are the new adjustable levers, which are easy to reposition with gloves on. The clutch pull is much lighter than on the previous model GS. All of the buttons are very similar to the 2013 F800GS, which no longer has the paddle style blinker controls. The grip heater and high-beam controls aren’t rocker toggles anymore, but are now operated with your index fingers. The steering geometry feels a touch lazier on the water-cooled bike, taking a bit more rider input to change direction. This could be due to the tire sizes fitted to the new bike, which are wider than those on the oil-cooled version. The front tire width has increased from 110mm to 120mm and the rear has grown from 150mm to 170mm.

At speed, the bike handles great and is very neutral mid-corner. The bars feel closer to the seat and the bike’s ergonomics are a much better fit than the previous model for a guy Iain’s size, 5 foot 8 inches tall. Additionally, we found the seating position to be much more comfortable than the oil-cooled version. The width of the bike between the knees is dramatically narrower than the old bike and the standing position is much nicer as a result. The windscreen manages airflow much like Touratech’s Desierto windscreen and is very easy to adjust with the knob, which can be operated with one hand even while riding. At high speed there is a bit of a flutter to the windscreen when it’s in the highest position, but that is a small price to pay for very comfortable, and conveniently adjustable, wind protection. 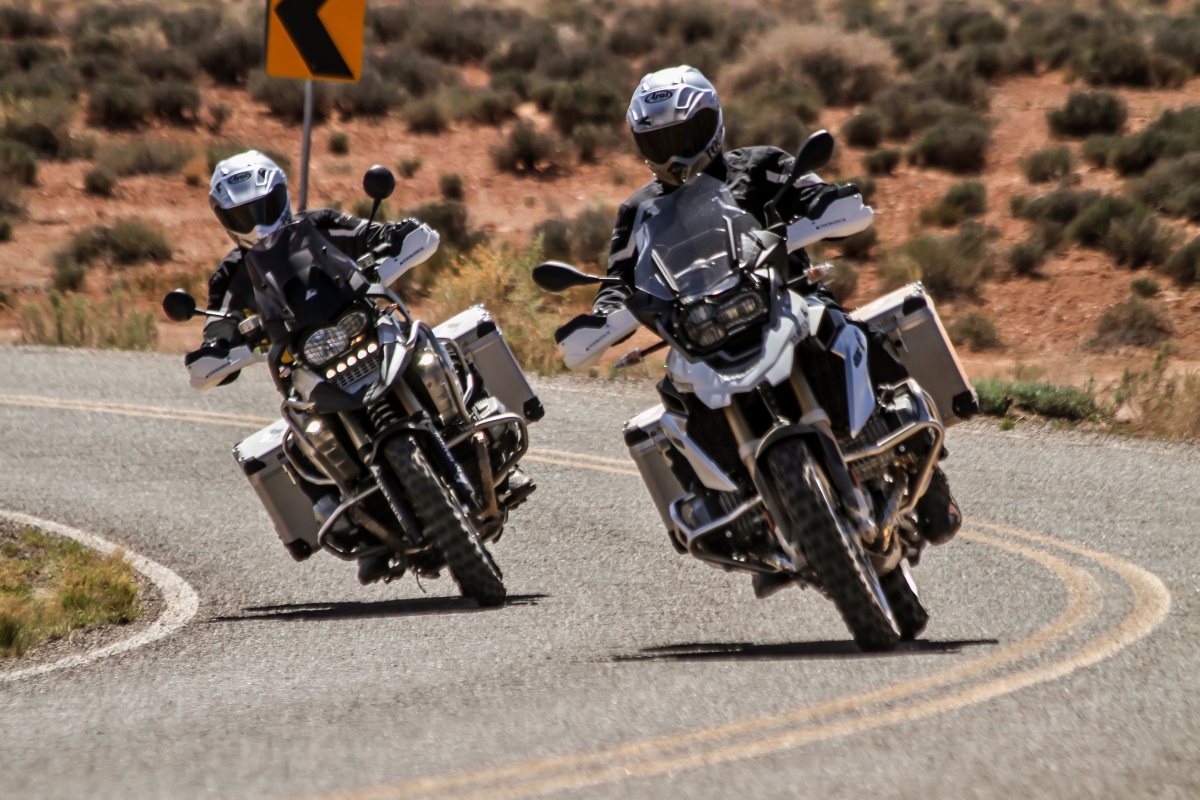 On pavement, the water-cooled GS displays its superiority with quick throttle response and power that seems bottomless compared to the oil-cooled version. Simply stated by Paul, “If I am going to be riding on tarmac all day, I’m taking the water-cooled GS!” While both bikes are at home on pavement, it was the water-cooled iteration that we both wanted to ride when we got to the asphalt.

The engine in the new R1200GS feels like it has much less rotating mass than the previous model. The engine winds up incredibly fast and triple-digit speeds can be reached rather quickly for an adventure bike. Mid-range and top-end power are considerably stronger on the water-cooled bike. The power and throttle response feel more like a sport bike than a GS. The fly-by-wire throttle has completely changed how BMW’s ASC (traction control) works on the motorcycle. The old bike controls wheel spin by cutting the ignition which results in fairly abrupt power loss and jerky ride. The new system uses the electric throttle motors to reduce the amount of power being applied, resulting in a far smoother ride. The compression has been increased to 12.5:1 and the bike now requires premium fuel to run properly. 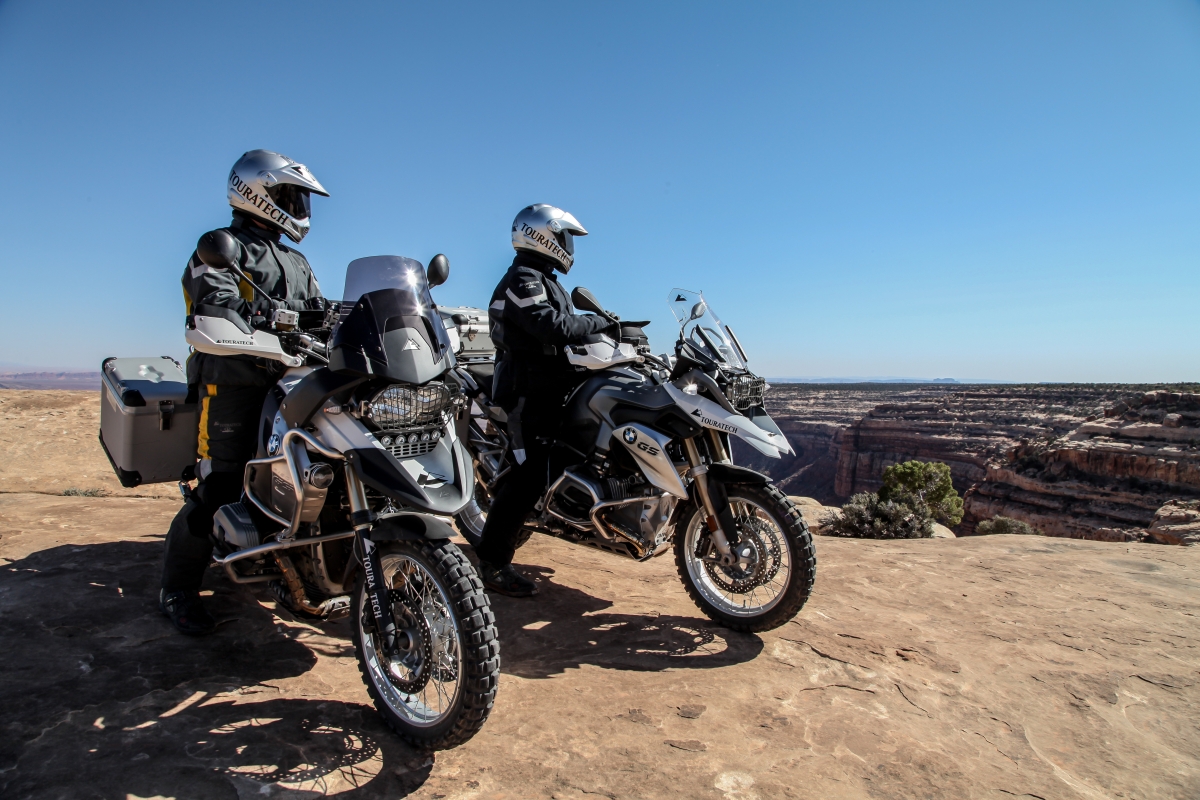 BMW’s design team set out to make the new water-cooled R1200GS every bit as capable off-road as its predecessors. They didn’t want the water-cooled model to lose any of the off-pavement handling that has defined the GS over the last 30 years. After riding the new bike, we believe they succeeded in their off-road mission. According to Paul, “the old bike has more usable power down-low and a slower-spooling engine, which is nice off-road, but the new electronic suite – with the ABS and ASC tuned for off-road in Enduro and Enduro Pro modes – help manage the extra power of the water-boxer in the dirt.” The narrower chassis also scored points with us riding the water-cooled machine in the sand, rocks and hard-pack soil of Utah. The new and old bikes get the job done much differently in the dirt, but come out just about equal overall in the off-road comparison.

One of our favorite new features is the wet clutch, which bites just like it should. On the new water boxer, the shift into first from neutral makes a palpable and audible clunk because of the drag from the wet clutch. It is really more like the way Japanese bikes feel, which is a bit strange to folks coming straight off the oil-cooled boxers. The gear ratios seem very similar to the old bike, though, with the exception that second gear felt taller and a bit more pavement-oriented. The clutch on the new bike is also equipped with a feature that BMW calls ‘anti-hopping,’ which acts like a slipper clutch to smooth out engine-braking. We feel like most people riding this bike won’t even notice it, but the ‘anti-hopping’ feature does make aggressive or even accidental downshifts more manageable. On the old bike, when a rider was hard on the brakes coming into a corner and downshifted suddenly, the back tire had a tendency to slide and trip the ABS into action. This process produced a squirrely ride and out-of-control feeling. The new water boxer avoids this with the ‘anti-hopping’ feature. 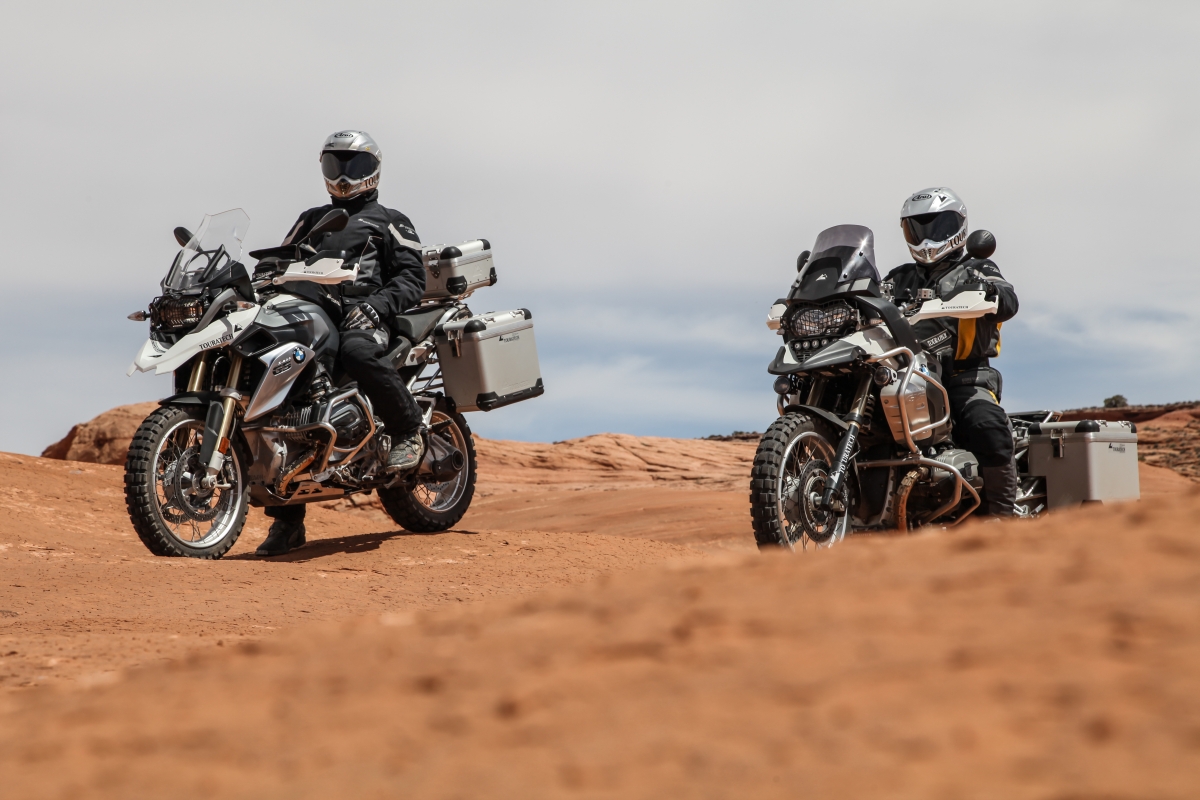 Fly-by-wire throttle, and dynamic ESA (suspension) are systems that have been adapted from BMW’s game-changing sport bike the S1000RR. Despite their popularity with the sport bike crowd, these additions are new to most of us in the GS world. Here is a breakdown of the five different modes of the 2013 water-cooled GSW:

Rain – This mode provides a softer throttle application, generous amounts of computer intervention to prevent wheel-slip, and the standard road-tuned ABS that limits tire lock-up under braking. In rain mode, the Dynamic ESA is set to soft by default but allows the rider to choose between soft, normal or hard damping options.

Road – This setting offers standard throttle response (similar to oil-cooled models) and traction control tuned for dry pavement, giving the rider full power and intervening only if wheel-slip is detected. Road mode has the standard road-tuned ABS and the dynamic ESA set to normal, but allows the rider to select soft or hard damping options.

Dynamic – Tuned for aggressive riding, this setting applies power much more abruptly through a quick-turn throttle. The traction control allows more wheel-slip than in Road mode, allowing for more rear- versus front-wheel spin before the computer backs off the power. The ABS setting is the same as Road and Rain mode. Dynamic ESA is in the hard setting, but soft or standard can be selected by the rider.

Enduro – This mode provides the same soft throttle curve as Rain mode – and even less active traction control than in Dynamic mode – allowing for more slide of the rear wheel and moderate front wheel lift. ABS intervention is reduced for improved braking on loose dirt or gravel conditions. Dynamic ESA is set to soft to improve traction over bumps, but can be changed to hard by the rider. (Normal damping is not offered in Enduro mode.) BMW claims that this mode is tuned for running road oriented tires when off pavement.

Enduro Pro – This setting can only be engaged by inserting an ‘encoding jumper’ plug under the seat. This mode engages the quick-turn throttle from the Dynamic setting and turns on a special off-road ABS mode that disables rear wheel ABS while retaining a small amount of ABS for the front wheel. The traction control feels similar to that of Enduro mode but is much smoother when riding the bike aggressively. The ESA is set to hard in this mode but can be changed to soft by the rider. BMW says this mode is tuned for riding off pavement with knobby dirt tires. 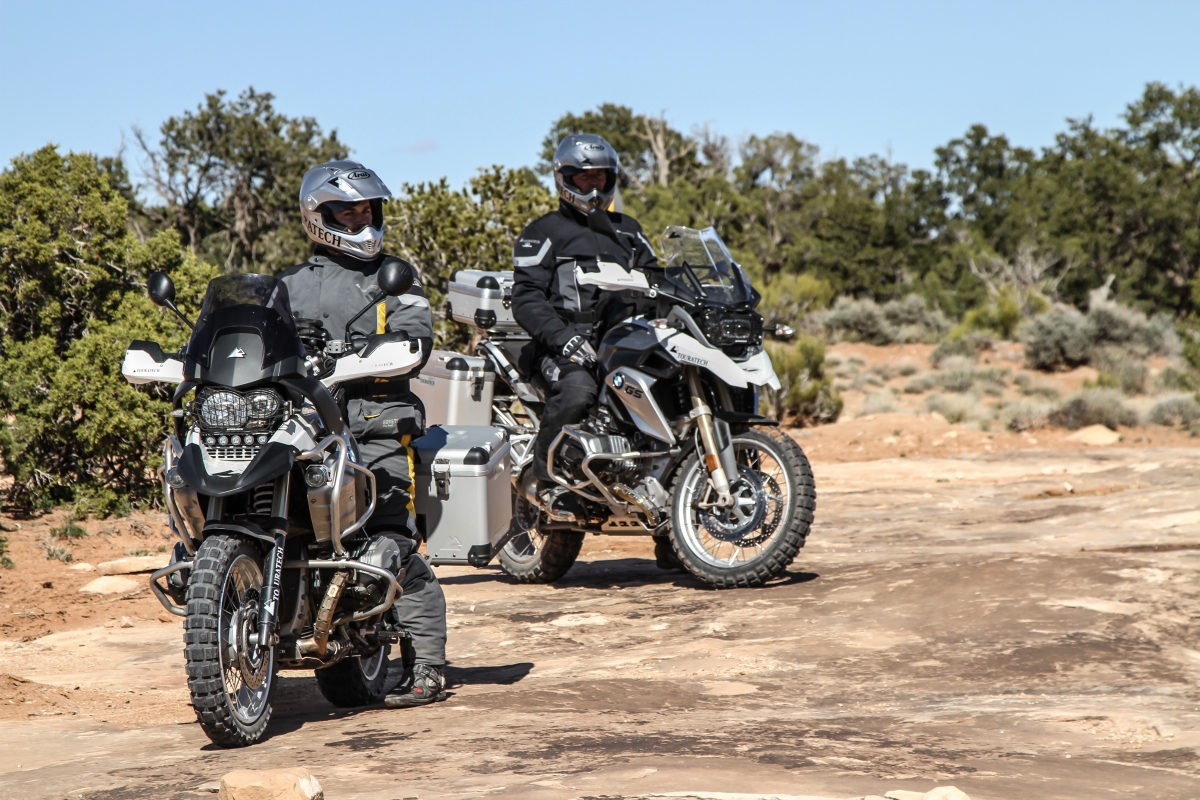 The electronics package on the new bike is a giant leap in the technology available to the GS rider. BMW used many concepts and technologies from the S1000 and K1600 when designing the bike. The electronically-controlled throttle bodies and fly-by-wire throttle have made it possible to integrate the ASC (traction control), ABS, and ESA (electronic suspension) in ways that were really lacking in the oil-cooled bikes. The new bike feels like a much more cohesive system of rider aids is at work behind the scene. We are happy to report that both the ASC and ABS can be quickly toggled on or off any time the bike is stopped which is great for those of us who prefer to ride in “full manual” at times.

Iain uses cruise control all the time in his car. His obsession with cruise control was previously limited to a throttle lock on his 2005 R1200GS, so he was very intrigued to see how ‘real’ cruise control would work on a motorcycle. After our first ride, Iain was really impressed with how BMW put this feature together. The controls and interface are very intuitive. BMW tuned the cruise control so that it comes on slowly and in a predictable fashion, which minimizes impact on the rider when adjusting or resuming speed. And let’s be honest, cruise control is a perfect tool to keep you from speeding on long, boring sections of road.

There are a number of other small electronic enhancements on the bike that won’t grab headlines but make every day riding a bit easier. The bike has the ability to check its own oil level at startup and will notify the rider when additional oil is needed. When used with the BMW Navigator GPS, the date and time settings on the bike will be automatically updated by satellite. When you run the fuel tank down to reserve, the GPS is notified by the bike and will pop up a list of the nearest fuel stations on its screen. The GPS unit itself can be operated directly from the handlebar by the twist and tilt controller adapted directly from the K1600. Altogether, the new electronic offerings have helped to refine the riding experience and make the new bike more sophisticated.

Although the oil and water-cooled bikes have different personalities, they are both easy to like. While the new water-cooled R1200GS has attractive modern styling and is more exciting to ride on pavement, the old oil-cooled model is still tough to beat in the dirt. The traction and low-end torque on the old bike is perfect off-pavement and it has just the right power delivery curve. We agree that the GSW has proven itself worthy of its place in the GS family. With this new model, the bar has been set high for other manufacturers to try to build a better motorcycle. BMW has presented a bike that will be easier for more riders to enjoy, without taking away the characteristics that have made the GS the bike-of-choice for so many great adventures.