This part explains the changes to the engine and there are some big changes!

The addition of the new member of the GS family to the ADV landscape is very exciting and Touratech is at the forefront with a full range of parts and adventure experts with the knowledge to take your ride to the max!

You can see a full transcript of this video below:

Hello, Ian here with Touratech USA, and here at the shop we’re all very excited about the new BMW R 1250 GS that BMW’s just released the information about, and the bikes are gonna be showing up soon, so I thought it would be a good idea to go through this 40-page press release and give you guys a lot more detail about what’s new on the new bike and the kind of features that we’re excited about here in the shop.

Let’s get into the engine on the new R 1250 GS. I’m really excited about the engine, because that’s actually where most of these changes on the new bike are centered. The big term that everybody’s throwing around is shift cam, BMW’s really excited about it, they put it on the side of the engine. Really the most basic level that you need to know about shift cam is it makes the bike run a little bit smoother, makes it get a little bit better fuel mileage, makes it a little bit cleaner on emissions. So we’ll get into more detail about that later, but here’s the really big differences on the bike.

That’s something you’ll actually feel while you’re riding. This motorcycle has a really broad torque curve, it’s really well set up for enduro riding as well as touring and just being a low effort bike to ride. So that’s gonna be really cool.

The shift cam allows the motorcycle to run in that setting, and then when needed, when you crack the throttle open, you get the motor spooled up, it shifts over, shifts the cam, to a higher rpm setting. The higher rpm setting opens the valves a whole lot further, keeps them open longer, and lets a whole bunch more air and fuel to dump in and then evacuate out of the motor real quickly.

What I thought was interesting from looking at the technical drawings that I could see online about this engine is that in the low cam setting, the low engine speed setting, the intake cam actually operates the engine almost as a three-valve head rather than a four-valve. It does still just tap the fourth valve open just a tiny, tiny bit, but again they’re really maximizing the tumble effect and the velocity of the intake air charge at low rpms by running it in that three-valve configuration. It’s super cool, but it’s really nerdy.

What you need to know is it makes the motorcycle run smoother, it makes it run cleaner, it makes it burn less fuel. And just to give you an example of how much of a difference it makes in running smoother, they actually lowered the engine idle by 100 rpm. I know that doesn’t sound like much, but that’s burning less fuel, and that just goes to show that the motorcycle is running that much smoother at lower rpms that it can sustain a lower idle.

BMW’s claiming a 4% reduction in fuel consumption, and that’s huge. When you think about engineering, and you think about new models of everything, it’s always small incremental changes, and 4% is actually a really big jump. So that’s super cool, that’s great for your fuel range, and it’s also great for the amount of emissions that the bike’s putting out as you’re riding.

BMW changed the oil intake on the motor, they’ve given it a variable oil intake system which is kinda cool. I didn’t know that the bike needed it, but apparently if you’re doing wheelies for a long time down the highway maybe it wasn’t getting oil the way it needed to. So it has a system that can shift where the oil is picked up in the bottom of the engine based on the position of the engine and what the G-forces are doing. It can pick it up from the back or it can pick it up from the front.

They’ve added a second knock sensor, they have a two-knock sensor system on the bike now. That’s so that you can run the bike in areas where there isn’t a good supply of really good, high-quality fuel. That’s important for the guys who are doing world travel. That means they’re allowed to run a higher compression ratio so that where there is good fuel they can get really good burn and really good power, but when they’re running somewhere where the fuel isn’t so good, the bike’ll still run, it won’t damage itself, it’ll just turn the ignition timing back and just run a little bit more calm on the poorer grade fuel. That’s really good for longevity.

And then the last change in the engine that I could see was they added an anti-hopping clutch, which basically just means as you’re putting back torque on the clutch system, throwing some down shifts into a corner, the bike is less likely to skip or lock up the back tire when you just really aggressive dump the clutch out.

Those are the big changes to the engine. If you wanna learn more about the bike or the full product line that Touratech’s producing, visit our website, touratech-usa.com. 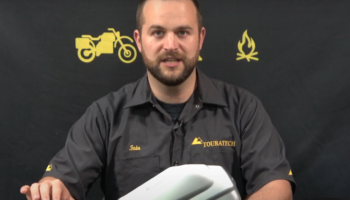