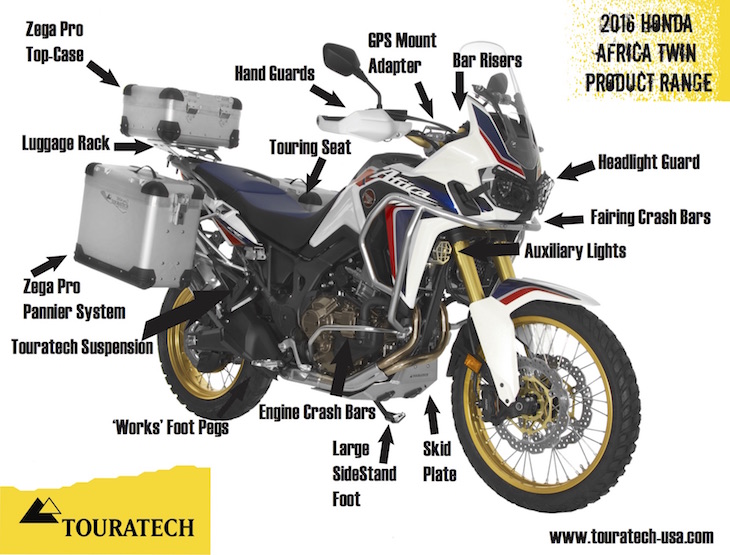 While riders have anxiously awaited the arrival of Honda’s new Africa Twin, the team at Touratech has been hard at work developing a complete range of parts and accessories to make this bike a legitimate choice for adventure travel.

Although the Africa Twin is new to the US market, Touratech has been making parts and accessories for its predecessors for decades. This history has enabled the industry leader in adventure motorcycle travel to waste little time developing a selection of upgrades ready to help the new bike from Big Red take on the world.

The complete range of accessories for the CRF 1000L Africa Twin appear in the new Touratech catalogue, which comes out in January 2016 and will be available on the Touratech website VERY SOON!

About the Honda Africa Twin

Honda fans have waited a long time for the CRF 1000 L, Africa Twin. It’s a modern version of the legendary XRV 750, which was based on Honda’s successful Dakar Rally race bikes.  Honda calls the project “True Adventure” – after all, the Africa Twin sparked an ‘urge to travel’ for a whole generation of adventurers, and still has a loyal community of fans. Many of them have crossed continents and explored the far reaches of earth. The original bike helped pioneer the adventure segment back in 1988 and now Honda wants to regain its position in the market with the launch of the 2016 Africa Twin.