This story appears in the spring 2015 issue of BMW Motorcycle magazine.

Few people on the planet are fortunate enough to live their dreams. Rock stars, relief pitchers and fighter pilots come to mind and so do the travelers, those courageous souls, with an eye on the horizon and wind in their faces. They disregard the past because it is only a tether that can slow their advance into the great unknown.

Over 11 years ago Simon and Lisa Thomas loaded up their motorcycles and began an odyssey that continues today. Over the course of those 11 years they set a new world record for continuous travel by a team. They’ve ridden through 78 countries and logged over 327,000 miles.

The Thomas’s know what works and what doesn’t when it comes to travelling by motorcycle. Through trial and error they’ve perfected the art of riding the world. The equipment they use has to be the best. Whether it’s a pannier system or a hand-grip, Simon and Lisa demand performance, quality, reliability and craftsmanship. Equipment that under-performs is not acceptable when your motorcycle is the foundation of your lifestyle.

With that in mind, Touratech challenged Simon Thomas to install and test their new suspension system. 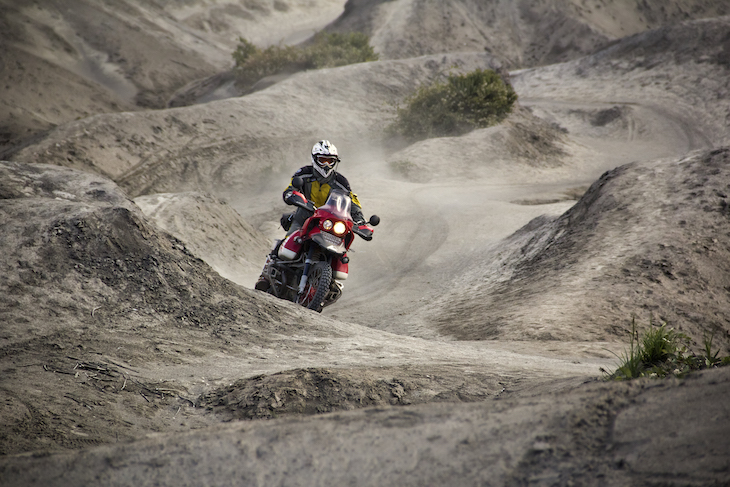 “I was pretty candid and told them that I was cynical and was going to need a lot of convincing,” said Thomas. “Over the years I’ve used a variety of shocks. The truth is I eventually end up breaking this stuff. “

Though he was very skeptical, Touratech continued the pitch over the course of a few weeks.

“I was pretty clear, “Thomas said. “I told them, if I put these shocks onto my bike and they don’t deliver, I’m going to be telling people that’s the case.”

Touratech’s response was clear: These shocks are going change the way you ride.

Eventually, Thomas relented and allowed the custom, high-end suspension he’d been using for over a decade to be replaced by the Touratech Explore shock on the front of his BMW R1150GSA and the Explore HP on the back. And so the test began.

“Right out of the box everything was good to go,” said Thomas. “It was set for my weight, my panniers, for my type of riding and more importantly for the kind of terrain that we’re tackling on a daily basis.”

First, the Thomas’s rode through the 2,200 miles of dirt and dust that comprise Australia’s longest axis. They rode the Islands of New Zealand and then it was on to North America, Mexico and Latin America. They crossed 5 deserts, 6 mountain ranges and thousands of miles of asphalt and concrete. To date, the Thomas’ have logged over 30,000 miles on their Touratech Suspension.

So how did the Explore shocks do?

“They performed flawlessly,” said Thomas. “I can honestly say, the Touratech Suspension was one of the better up-grades we’ve made in the last 11 years and that’s not something I say lightly, considering both of our bikes are modified beyond belief.”

“The rear shocks incorporate a sixteen millimeter oversized shaft. We’re going to have to go some ways to try and break that,” Thomas said. “They’ve also inserted a floating seal between the oil chamber and the nitrous chamber in the top of the shock, which provides less foam. Less foam means less wear and tear and more feedback, continuously.”

Adventure motorcycles are expected to carry the traveler through raging storms and the sticky incalescence of the equatorial regions. They take a beating as they traverse the roads, beaches, mountains, deserts and jungles of our planet and the relationship between the bike and the surface is as important as the one between rider and motorcycle. Suspension is the conduit that brings harmony to that relationship.

“When you’re off-road and you’re tired and dehydrated you want all the help you can get,” Thomas said. “The level of confidence I have going off the beaten track has increased and do you know what? If I’m not worrying about something that means I’ve got more energy to focus on the riding. At the end of the day that’s what it’s all about: the riding.”

As they live out their dreams daily, virtually no two people on earth know more about the importance of good suspension than Simon and Lisa Thomas. After testing the Touratech Suspension system for the last 24 months this was Simon’s conclusion:

“So for the really big question: Are they better than anything else I’ve used before? The answer is yes and I wasn’t expecting to say that.”

Please read more about Simon and Lisa’s adventures at: 2RidetheWorld.com