As with many great stories, this one starts with two guys chatting over a pint of beer one evening. They are talking about their shared passion for motorcycles when they stumble upon an idea to create a route from Oregon to Canada through the Washington backcountry. 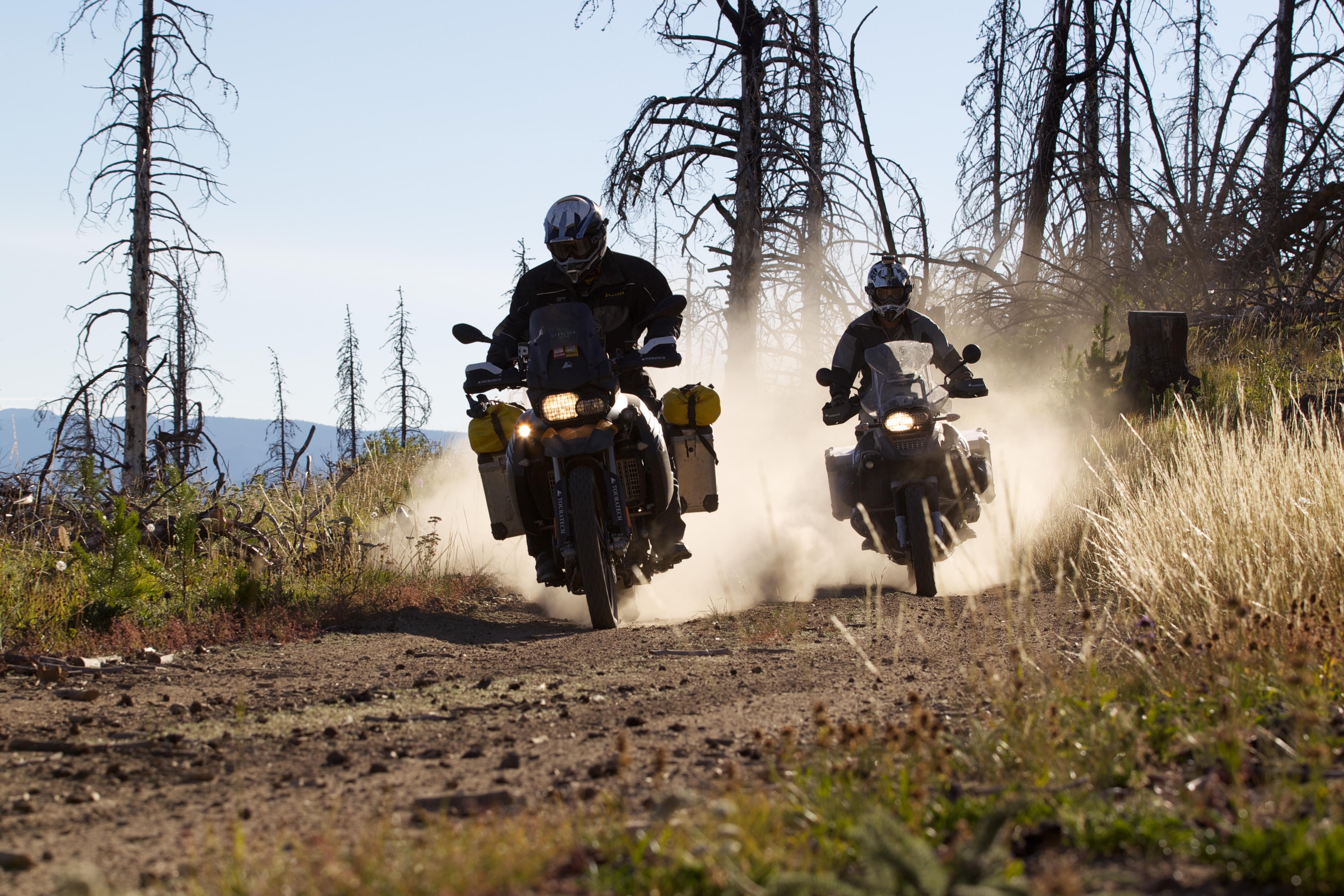 This idea gains momentum when its awarded the 2010 Overland Flag for best proposal for an expedition.

Bryce Stevens (Founder of Trails.com) and Andrew Cull (CEO of Remote Medical, Inc.), quickly transform their beer-inspired notion into a plan of action. While others have ridden similar routes across the state, Bryce and Andrew have visions of making a documentary film, website and free GPS tracks to share with the community. Inspired by the famous route in Oregon they settle on the name “Washington Backcountry Discovery Route”. 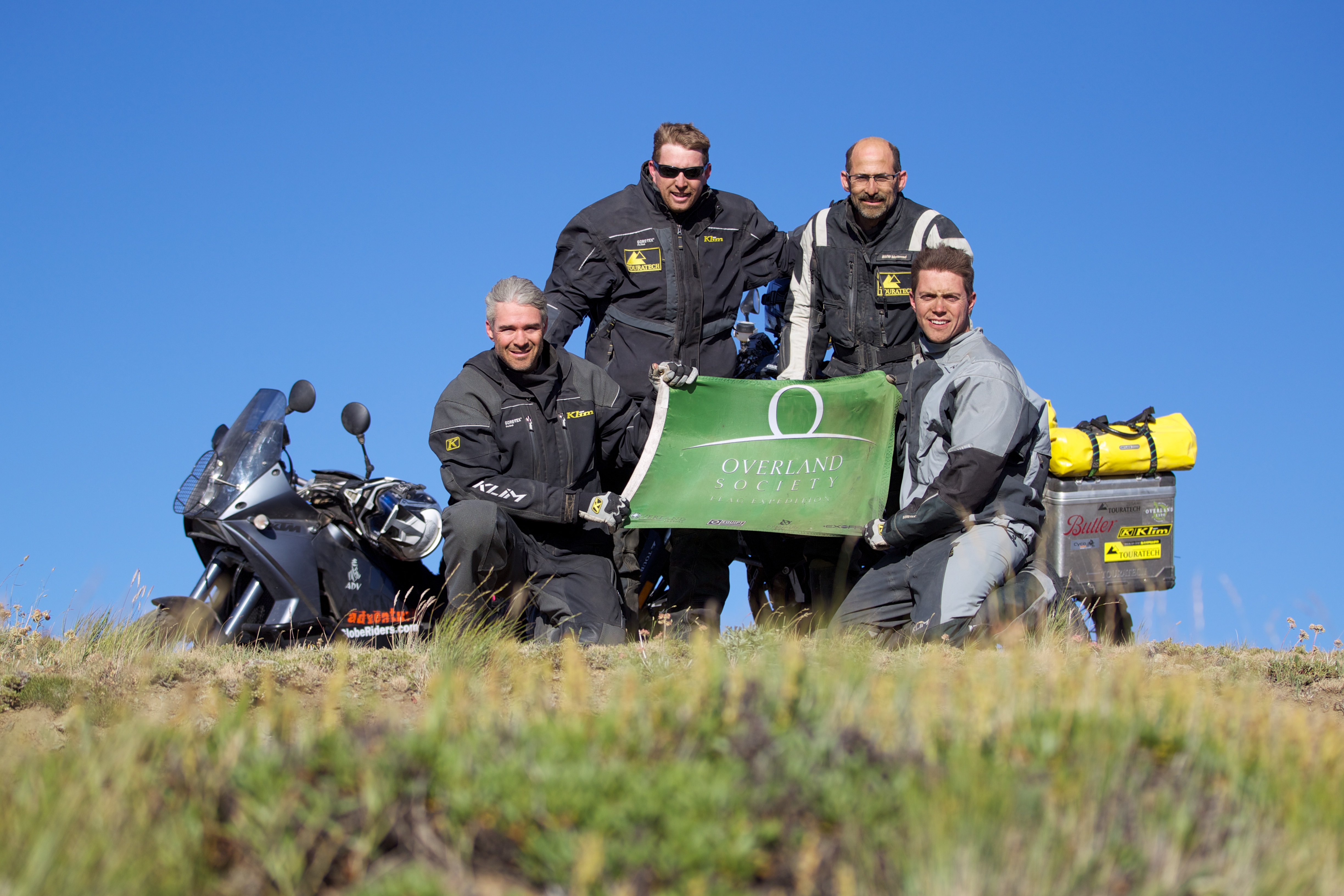 By spring the two have enlisted the support of Tom Myers and Paul Guillien of Touratech-USA, Sterling Noren of Noren Films, Helge Pedersen of GlobeRiders, local BMW dealers and a host of other sponsors. Fast forward to mid-August and the six motorcycles and one support vehicle, loaded with camera and film equipment, begin an 8-day expedition into the Washington backcountry. 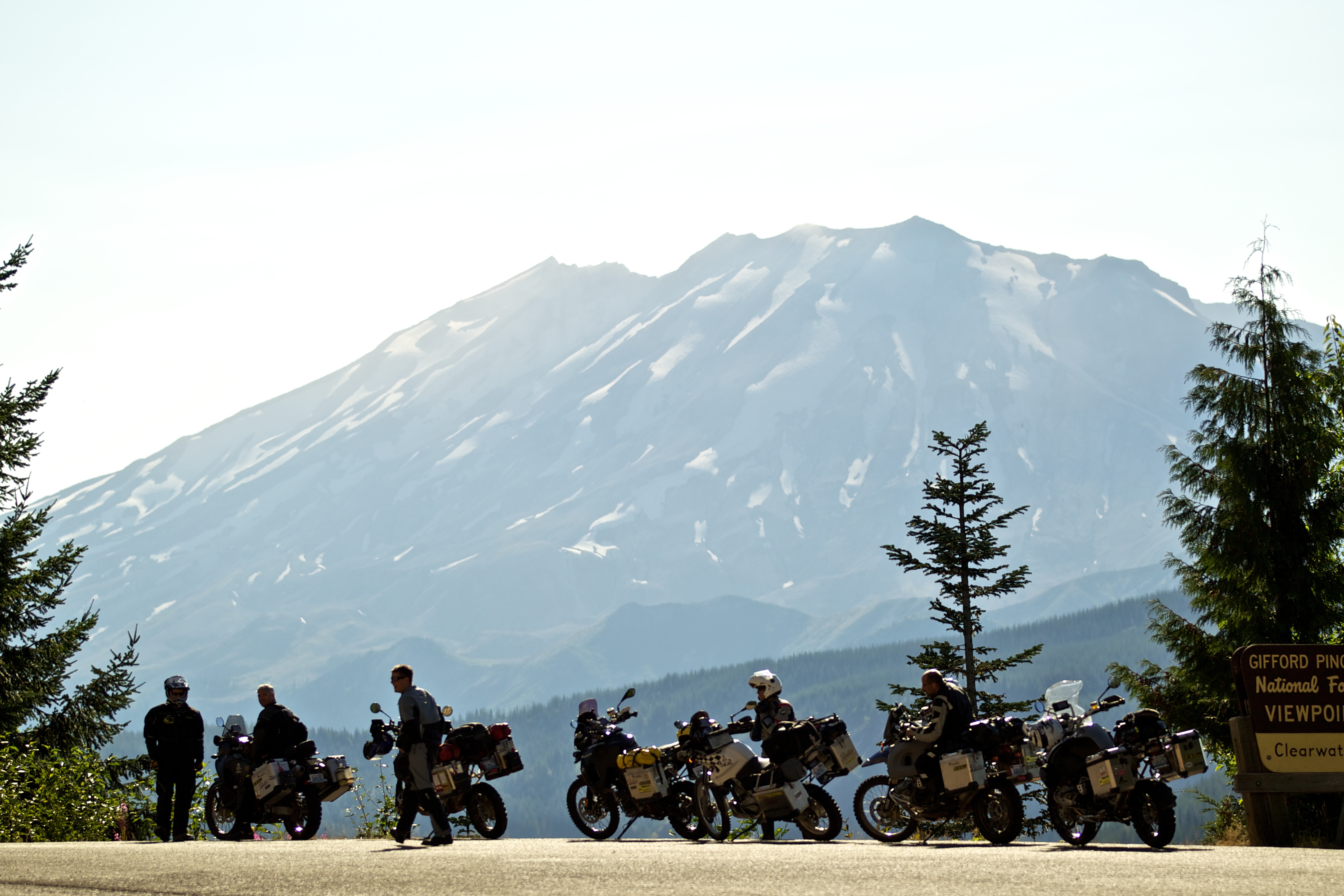 We roll ceremoniously over the Columbia River from Oregon into Washington. We have a mystical experience on the aptly named “Bridge of the Gods” as the morning light filters through the misty air rising off the river. This captivating scene fills us with excitement for the adventure that lies ahead. 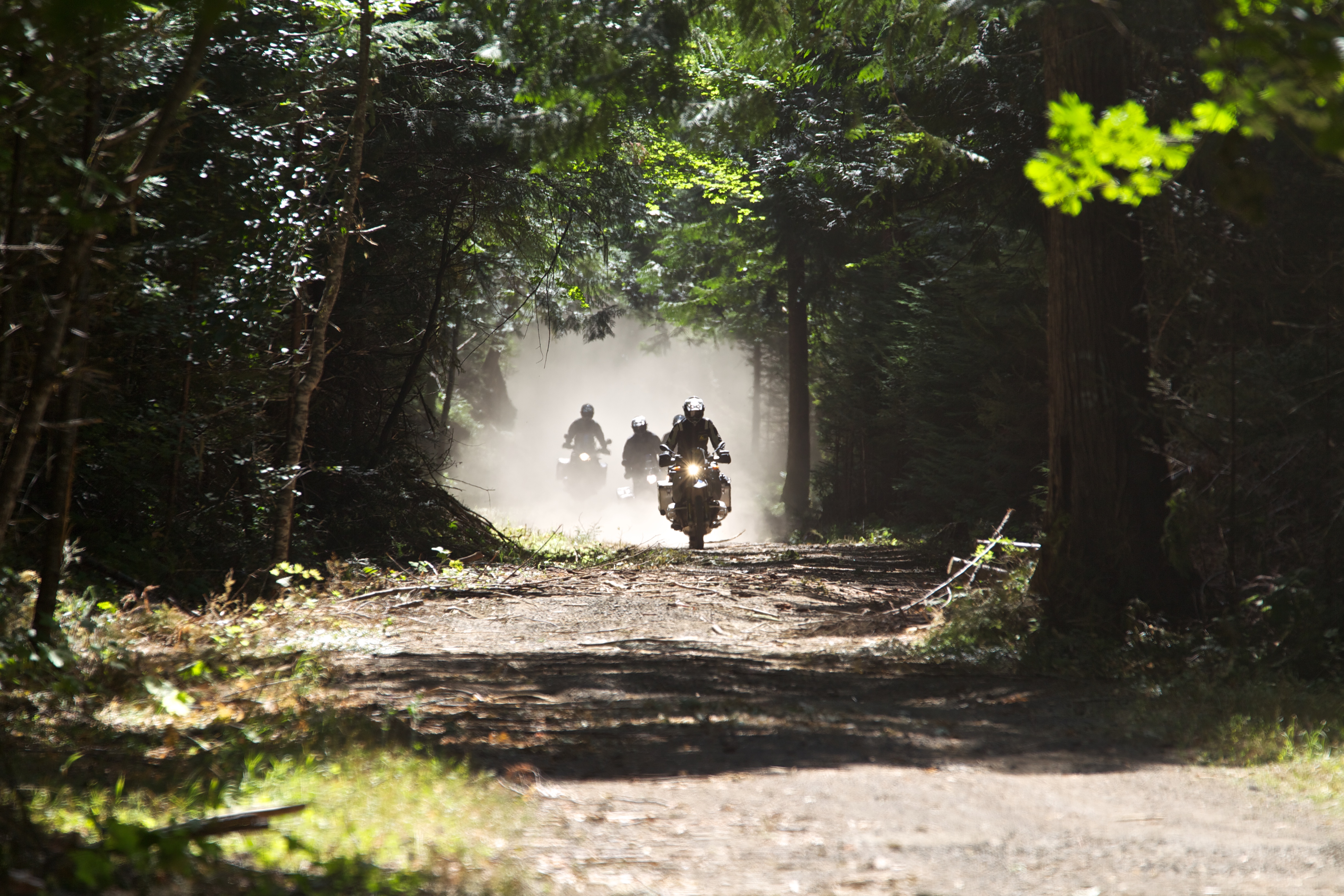 Soon we are on dirt roads that wind up and down the foothills of the Cascade Mountains. The dense forest opens up and we are treated to a breathtaking view of the 12,281 foot tall Mt. Adams. Another window through the thick trees reveals Mt. St. Helens, the infamous volcano that lost 1,312 feet of elevation in a catastrophic eruption on May 18th, 1980. 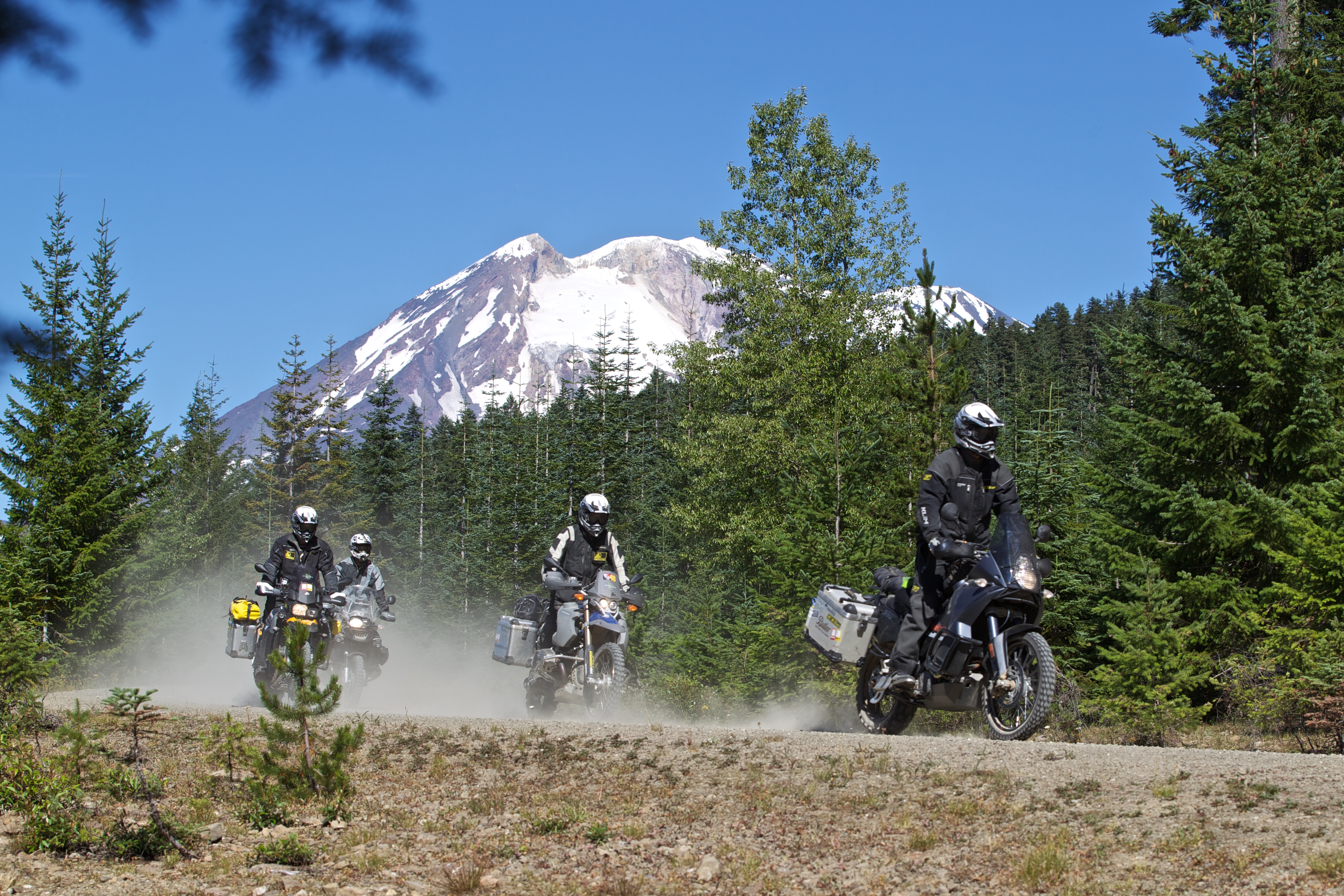 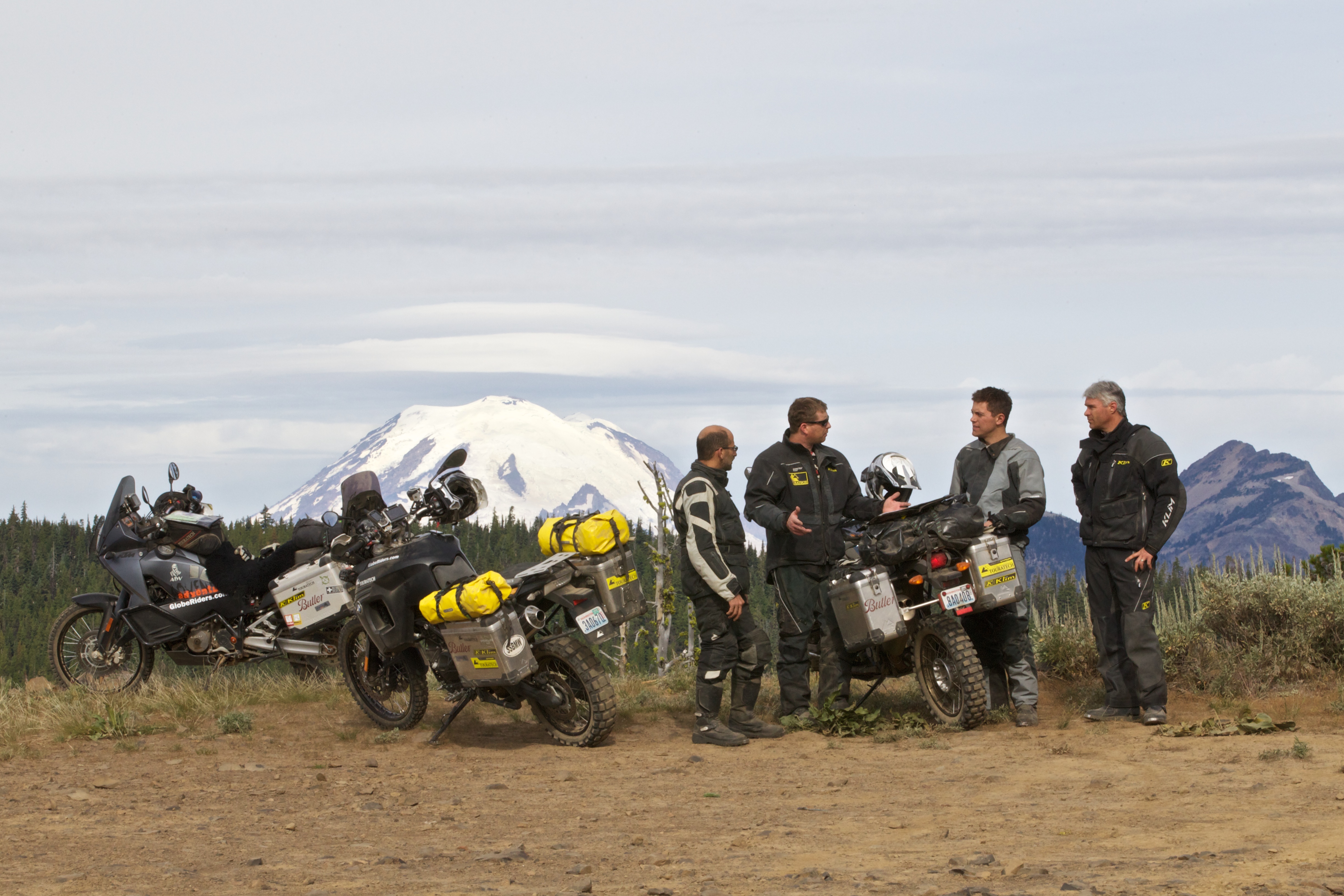 We visit the Guler Ice Caves, a geological wonder created by a lava flow over 20,000 years ago. On this hot August day, we climb down into the cold dark cave and shine our headlamps on ice formations that rise off the cave floor about head height and as wide as a door. 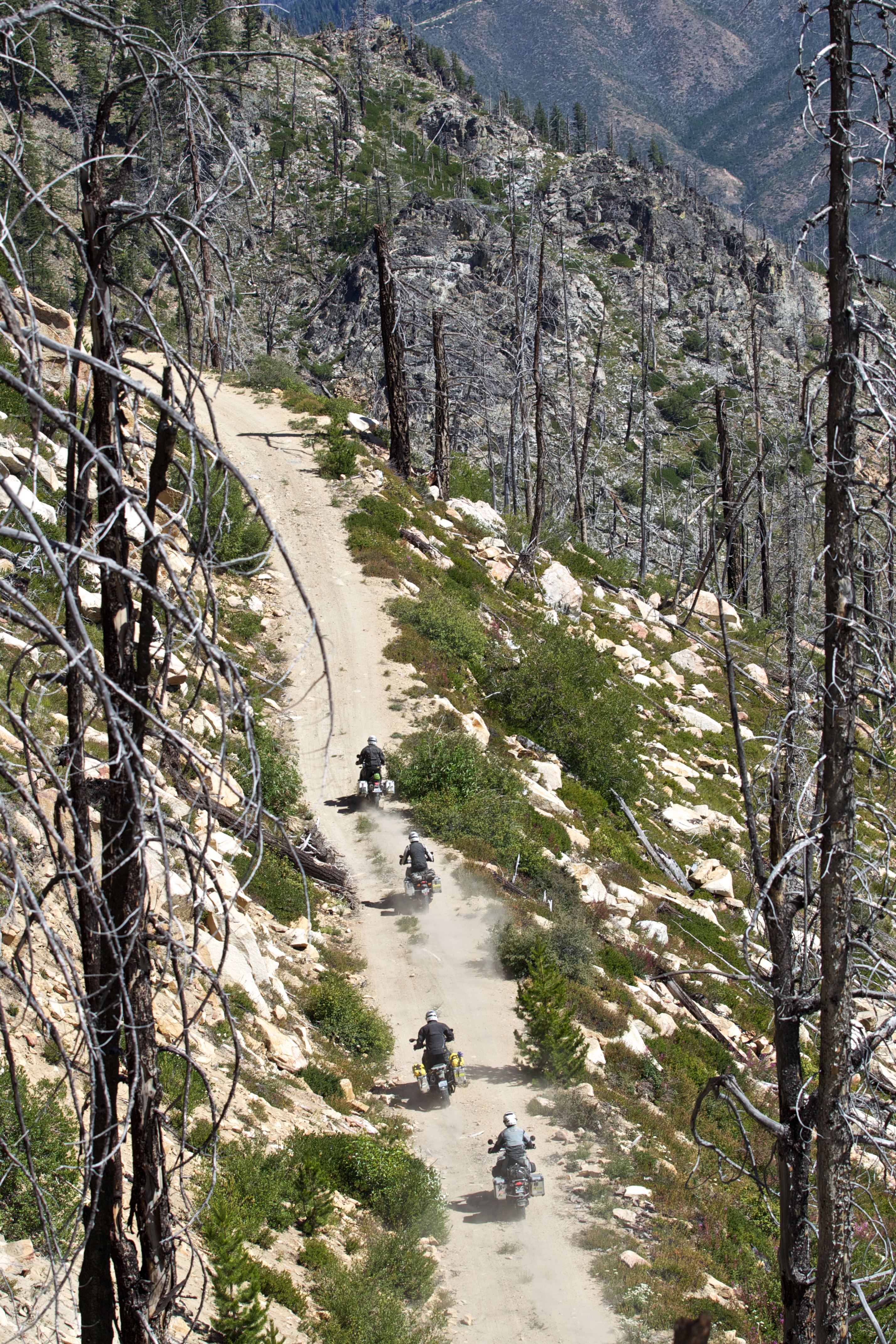 At 8 pm we are finding our way up a steep climb to Cash Prairie on the border of the William O. Douglas Wilderness. We settle in at a campground at approximately 6,400 feet elevation and catch a breathtaking view of the sun setting into a pink sky behind a stunning 14,411 foot tall Mt. Rainier. 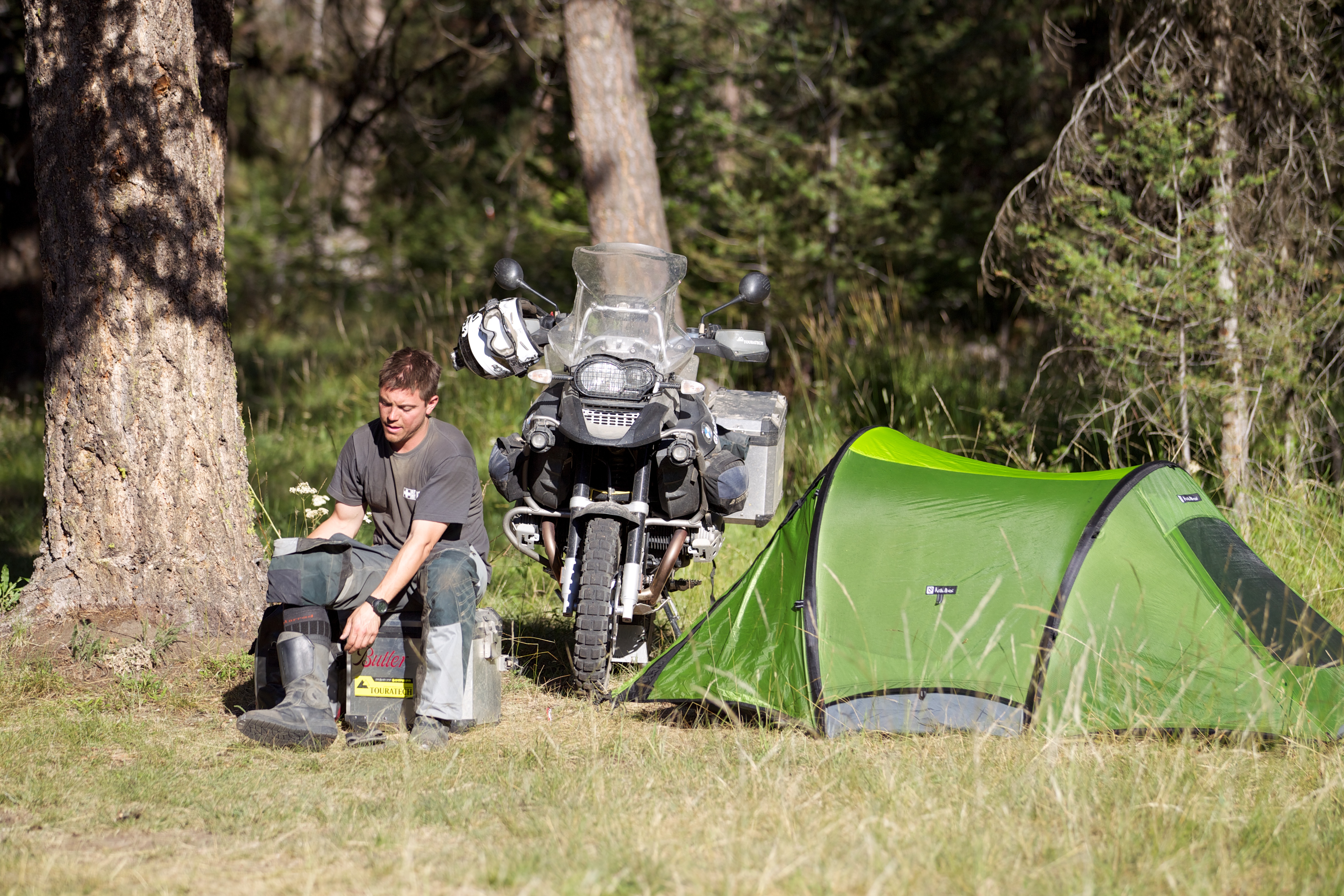 We wake at first light to ride up Bethal Ridge, where we film a dramatic vista overlooking Rimrock Lake. From this vantage point we can see the white glaciers of Mt. Adams to our south. We park the bikes atop a black rock formation and look cautiously over the edge where the cliff falls away several hundred feet.

The Road Gets Rocky 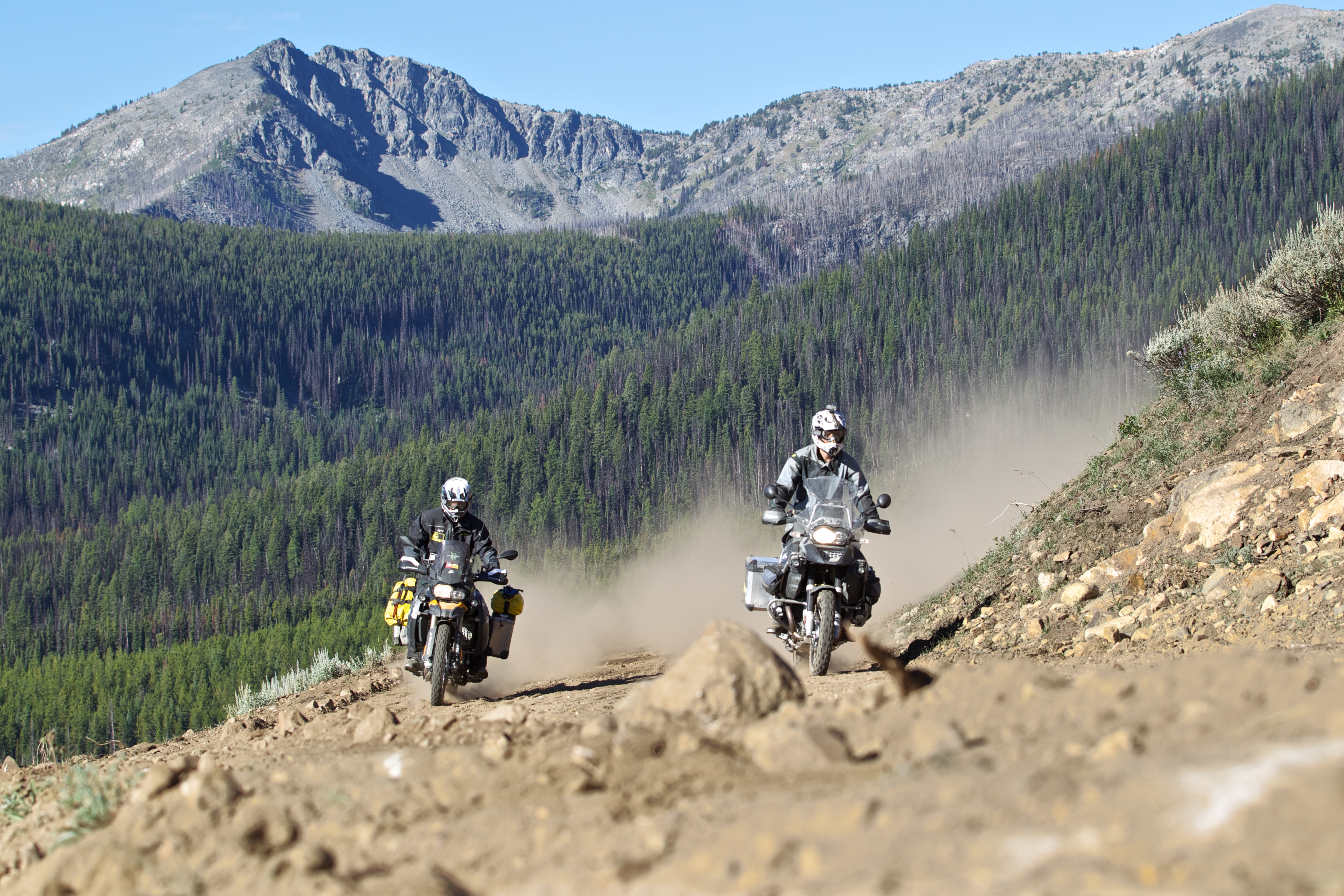 We are now in the arid rocky landscapes of Eastern Washington. Gone are the smooth dirt roads and thick forests of the Cascade Mountains. Sterling and Helge capture the team bouncing our large bikes up a short steep section of road with softball-sized rocks loosely covering a slab rock surface near Cleman Mountain. 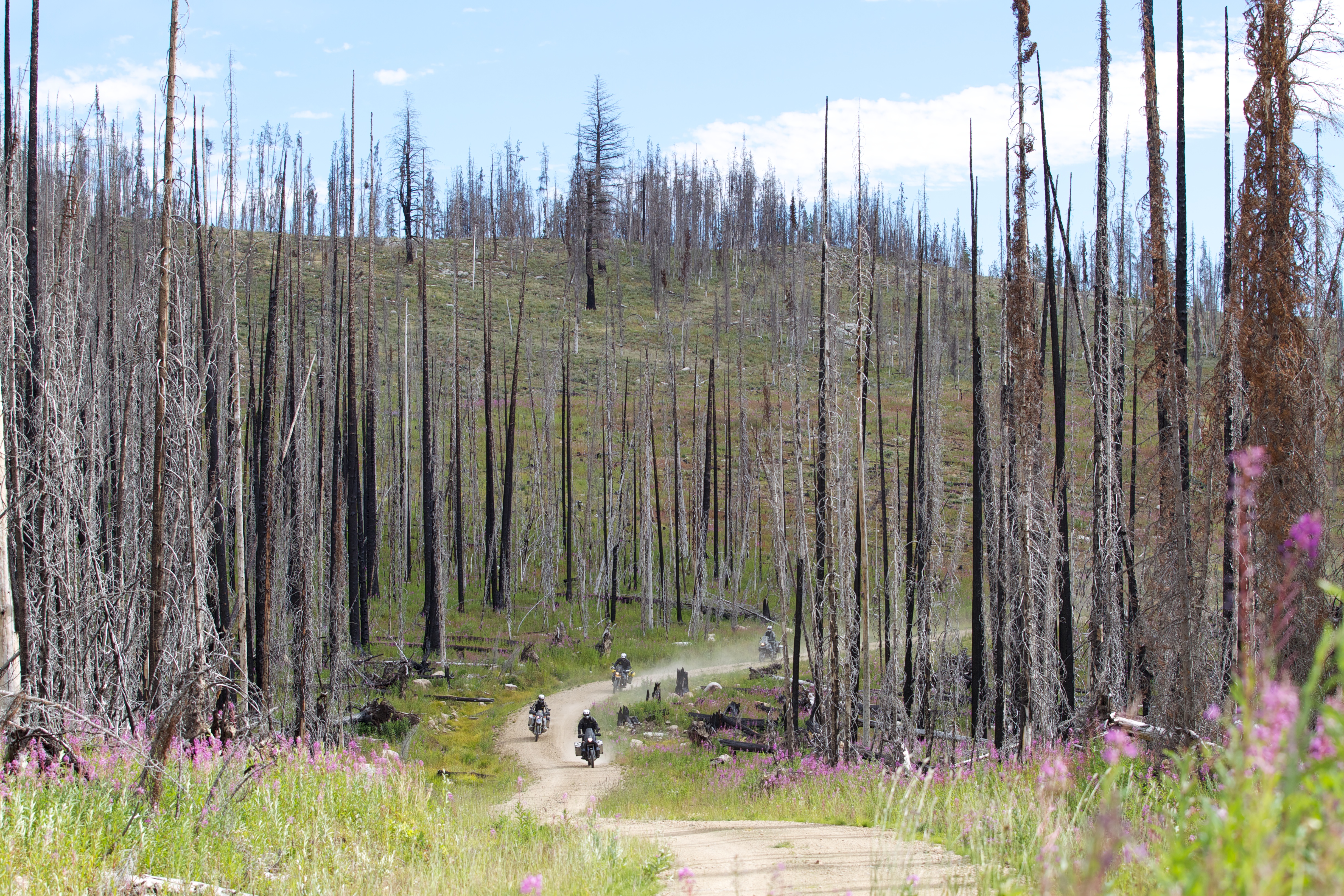 An hour later, Helge’s front tire loses a battle with a rock and we are treated to a tire repair clinic from the master. Helge reminisces about the time in Somalia where he patched the same tube 33 times. This section, from Nile Valley to Ellensburg, challenges the team and adds more excitement to our day.

Its on this section, near Durr Road, that I give my F 800 GS some bad instructions and we both end up on the ground. A few hours later we make camp on a flat bluff overlooking the Kittitas Valley and enjoy the sea of lights from communities below. The lookout point at Lion Rock, some 6,360 feet above sea level, is socked in with fog so we ride north on exceptionally fun high-elevation twisty roads toward Beehive Reservoir and then down Mission Creek. 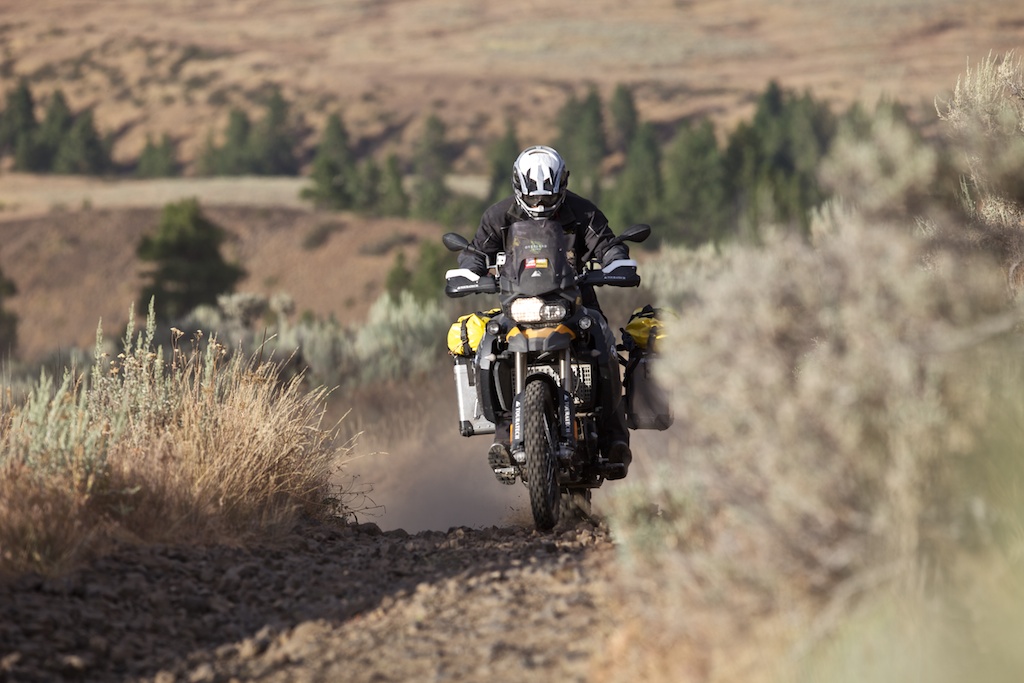 We fuel up in Cashmere and ride smooth dirt roads up Nahaham Canyon to the 5,810 foot Chumstick Peak. The 360-degree view is stunning, but we struggle in the 60 MPH wind gusts. As we descend Chumstick Mountain, I pick up a nail in the rear tire and get the opportunity to practice the tire change tips I learned from Helge just the day before. 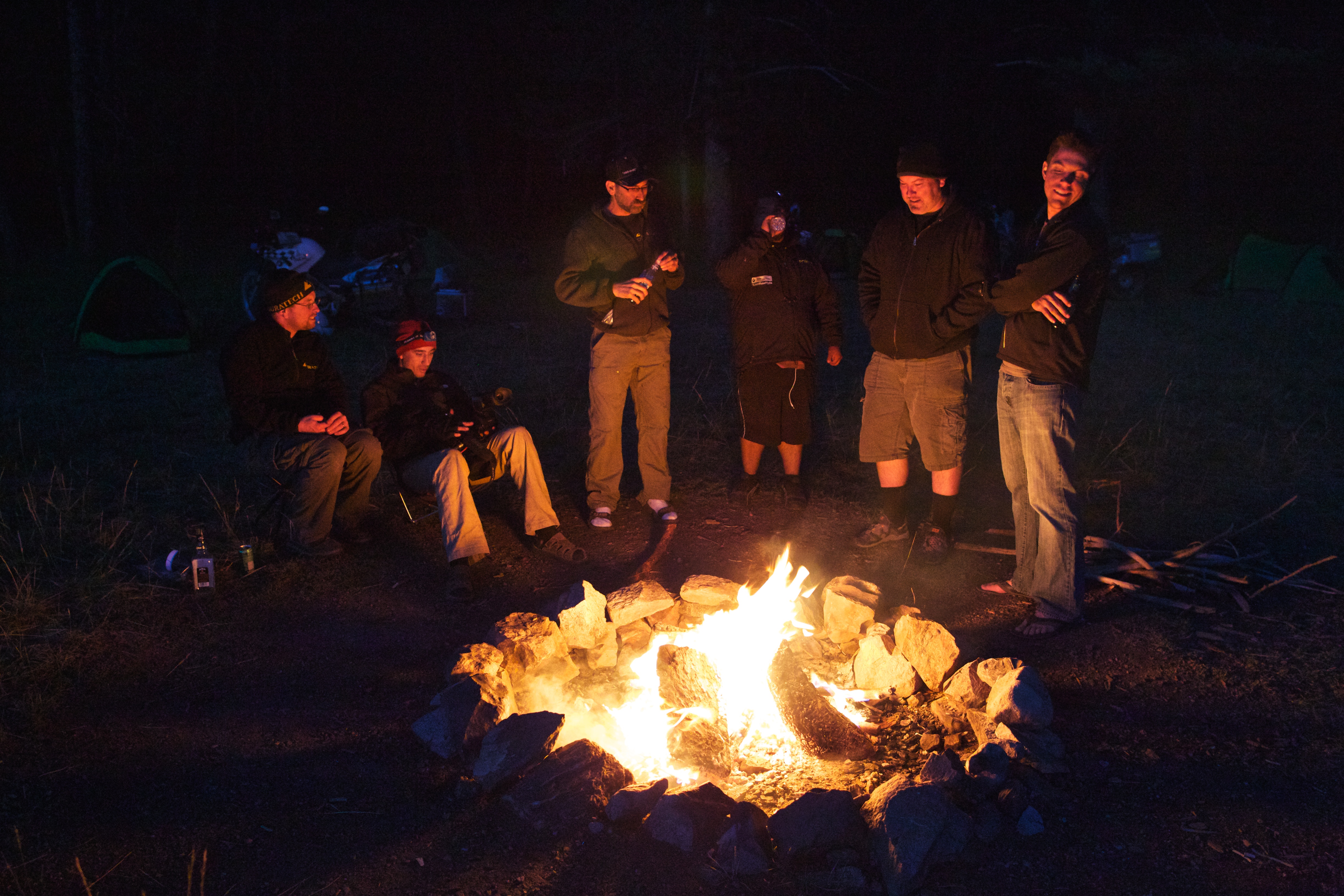 We camp 11 miles north of Leavenworth in the shadows of Sugarloaf peak. We sit around the campfire listening to Helge tell a story about the time it took him three weeks to cover 80 miles across the Darien Gap from South America to Central America. Our group groans when he describes how he removed 156 ticks from his friend’s body one night. 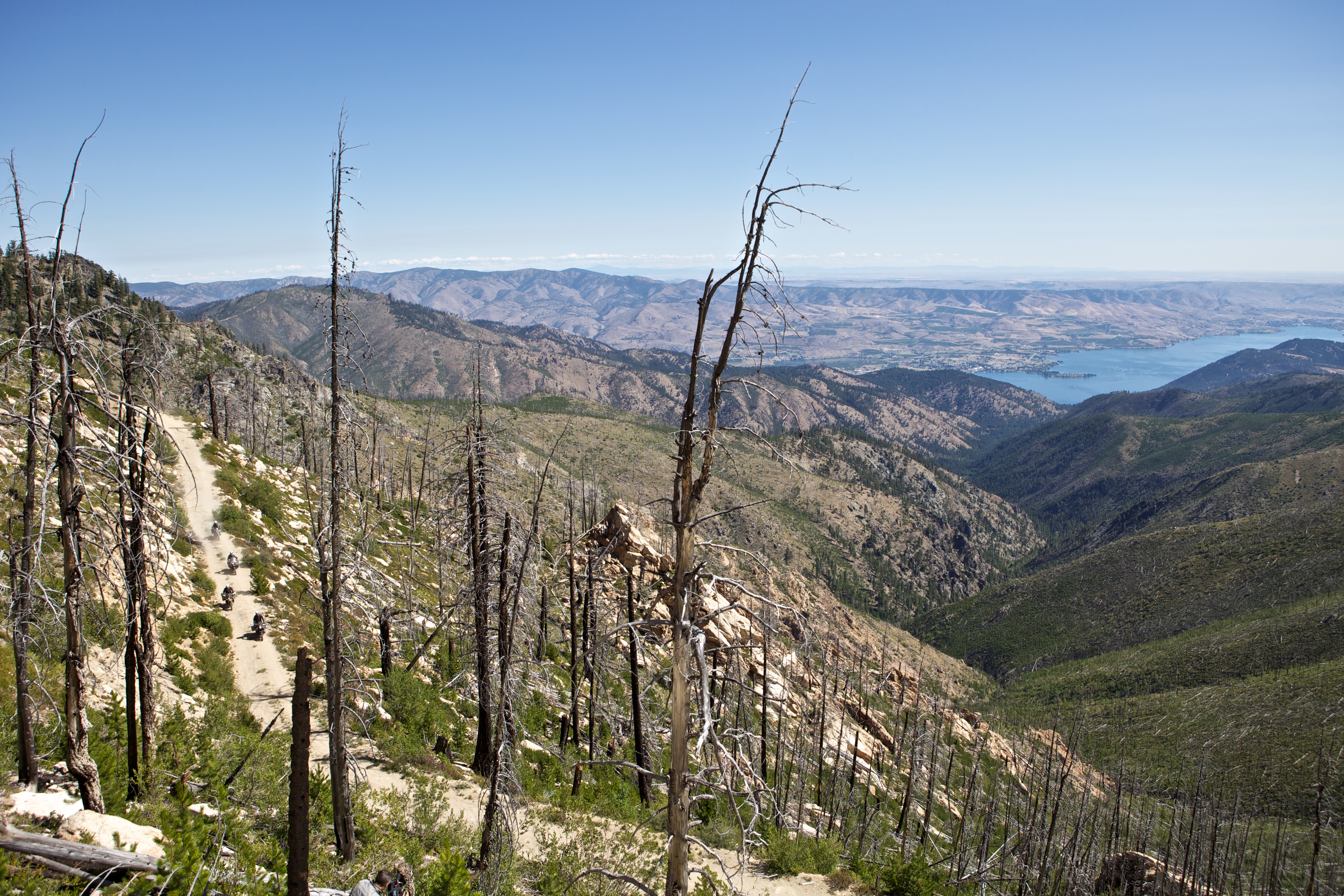 The track leads us east over Roaring Ridge and Moe Ridge before dropping down into the Entiat Valley to a one store town called Ardenvoir. We continue north to dirt tracks that climb from the Entiat Valley up over Chelan Mountain to Slide Ridge. The route leads us quickly up the mountain on a steep hard packed road with dozens of sharp corners. I fantasize about racing Pikes Peak as I fly up the mountain on my F 800 GS, which feels like it was made for this road. At the summit we take in stunning views of Lake Chelan 4,500 feet below. An hour later we are swimming in the lake. 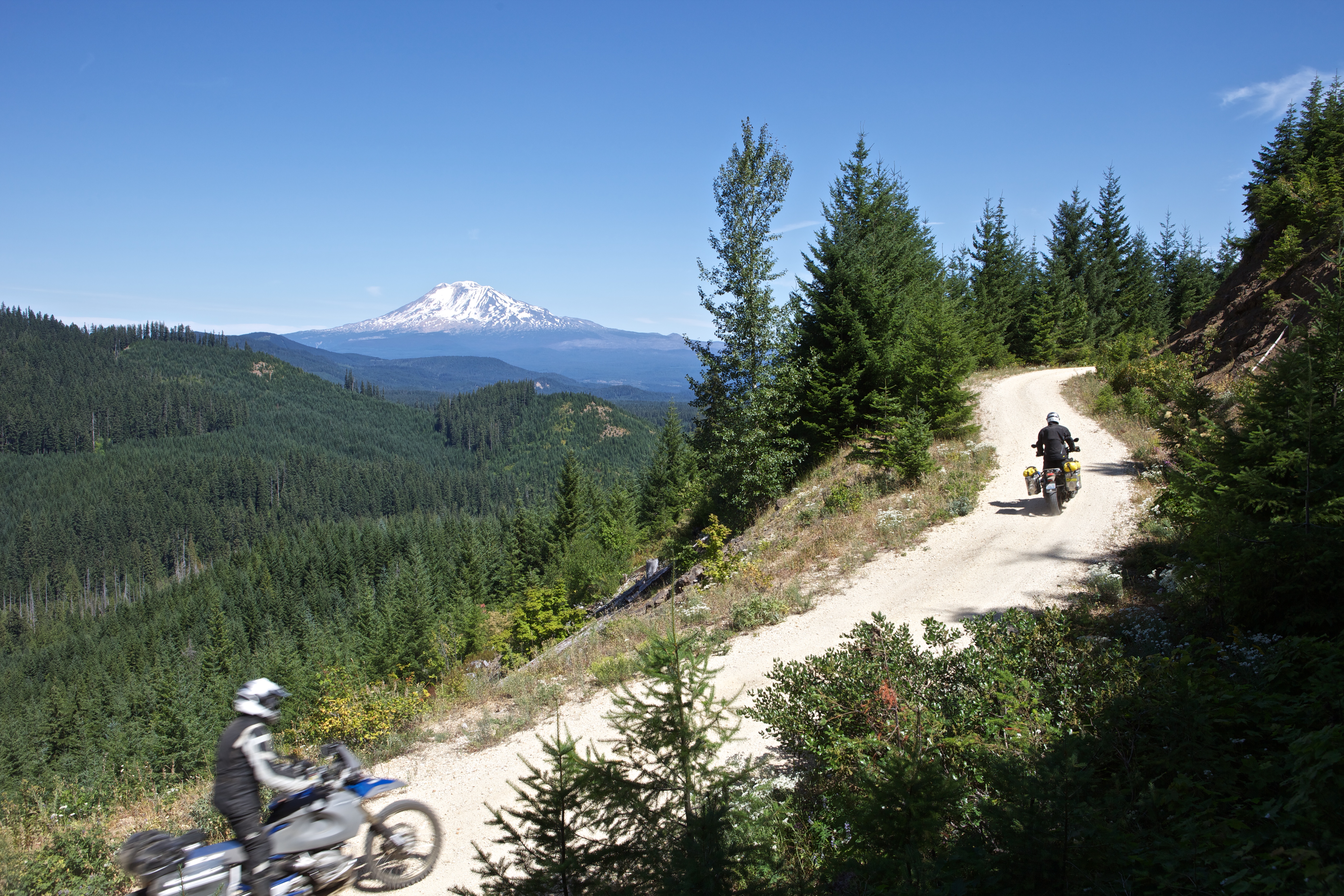 Day six takes us from Foggy Dew campground through the defunct mining town of Ruby, a once bustling mining community that met its demise when the silver market collapsed in 1892. We reach another one store-town and gas pump in Conconully where we fuel up and take note of the absence of activity on the main street.

Continuing north on gravel roads, we make camp in a large meadow at Salmon Prairie. We are deep in the Pasayten Wilderness, which borders Canada and has very few roads or signs of people. This wild country has 150 peaks that are over 7,500 feet high and it’s home to the largest population of lynx in the lower 48 states. Deer, moose, mountain goats, big horn sheep, grizzly bear and even the gray wolf are residents of this remote section of the North Cascades. 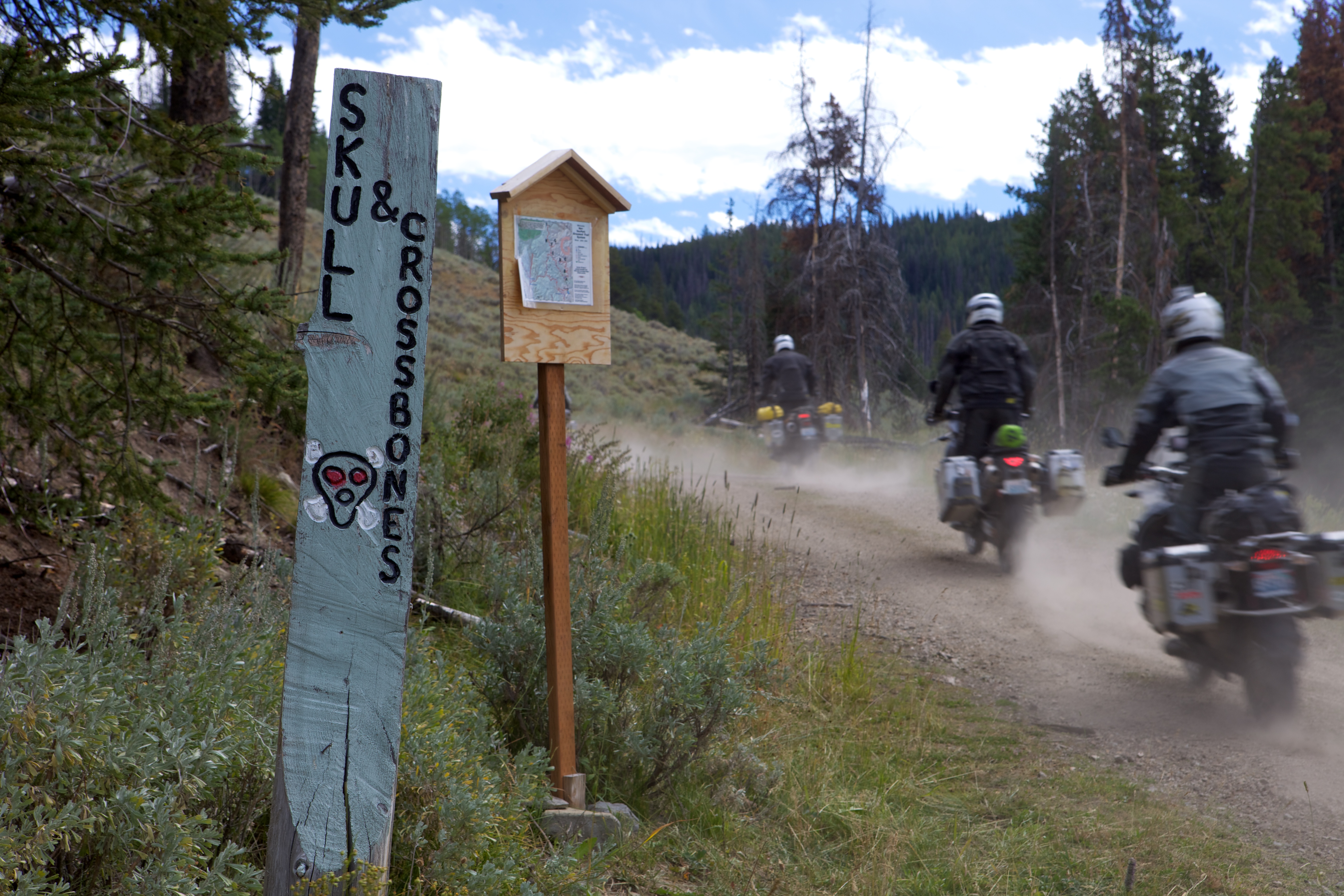 On the last day, we cross Lone Frank Pass at nearly 7,000 feet before riding the ominously named Skull & Crossbones Road. We stop to explore an old homestead cabin and log corral that looks like its out of a Wild West movie. Near the crest of the ridge we stop for a large heard of cattle milling around on the road. Shortly after they clear the way, we stop again. This time its a cow-sized rock that makes contact with a pannier on Bryce’s KTM 990. Bryce is fine, so we continue down steep switchbacks into a gorgeous valley just south of Palmer Lake. We roll past Palmer Lake through what’s left of the old mining town of Nighthawk. With plenty of daylight left and a feeling of accomplishment, we reach the US/Canadian border, which marks the end of this great journey. 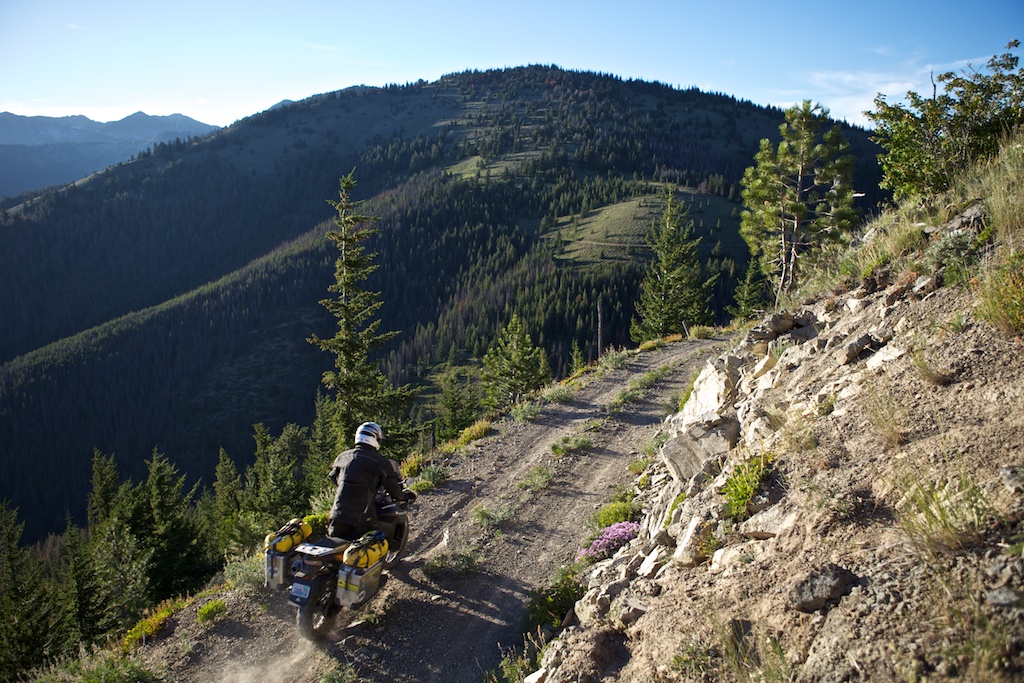 Rhythm of the Road

On a ride like this you have time to contemplate your surroundings as you dance your bike along the backcountry tracks. Somewhere along the way I come to the realization that these roads are really 3-dimensional. They curve back and forth, rising and falling through dips and valleys. As you flow over the undulating curves your mind, body and motorcycle blend into a nice rhythm and you feel a distinct sense of connection to the terra firma below.

Washington has so many different landscapes that you can ride through a dozen variations in a single day. 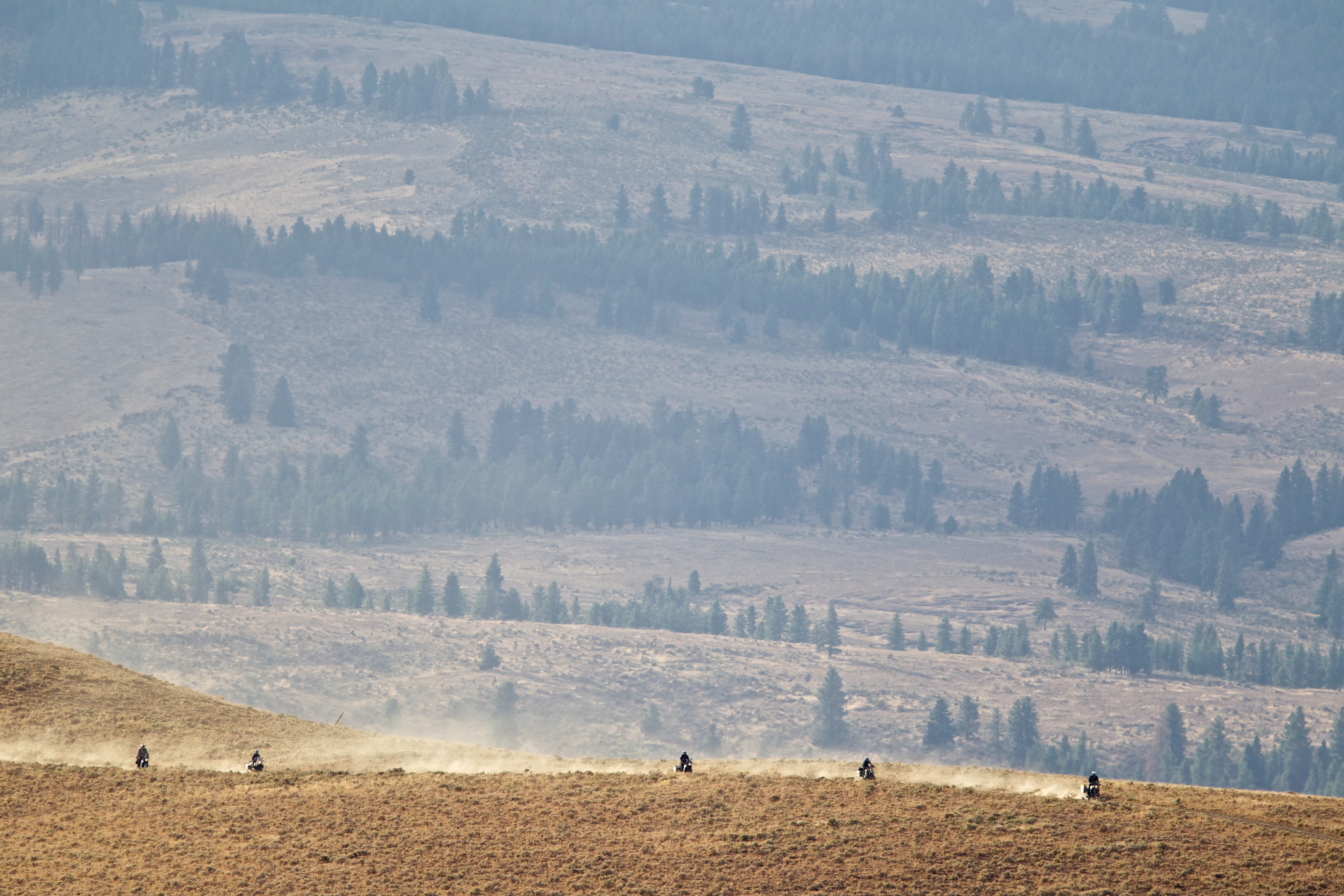 On the motorcycle, you are able to see, smell and feel the textures of each. You experience the different geology beneath your tires, from the jagged rocks to the white powder like soil that poof up like smoke when you pass over. There is no better way to intimately experience such a broad array of landscapes than on a backcountry motorcycle trip. I conclude that this truly is the best way to get to know the state of Washington. 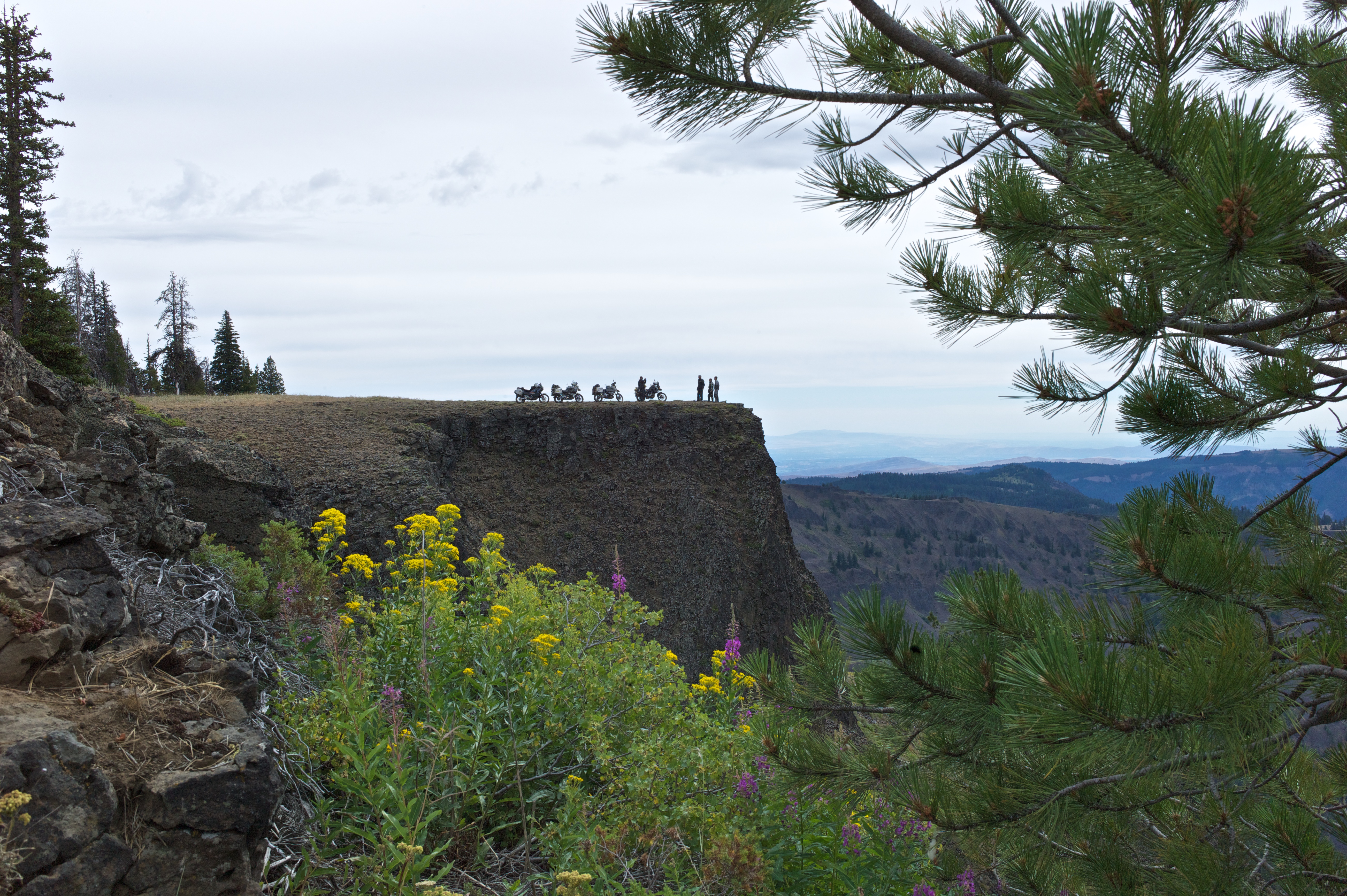 www.wabdr.com is the official website of the Washington Backcountry Discovery Route.

A synthetic Butler Motorcycle Map of the route can be found at Touratech USA or Butler Maps.

Cell phone coverage is not available on much of the route. A SPOT II communication device is a great idea for this trip.

There are many campgrounds along the route. Hotels, restaurants and grocery stores and gas are available in Stevenson, Packwood, Ellensburg, Cashmere, Leavenworth, Chelan, Twisp, Omak, and Oroville. The small towns of Ardenvoir and Conconully have gas and limited supplies.

The Nighthawk border crossing is typically open 9am to 5pm seven days a week. Confirm by calling the US Border Office: (509) 476-2125. Remember to bring your passport!

The route is best from July – October depending on snow pack and weather. The route is approximately 600 miles long and can be done comfortably in 5 – 6 days.

Also see an article about WABDR in Rider Magazine